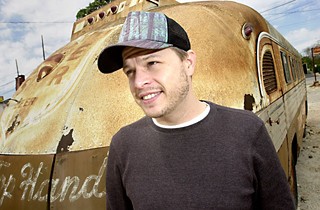 What the hell happened to the old tour bus parked outside the Spoke?

"That was a 1948 Flxible bus," explains James White. "I'd booked the Texas Top Hands in the Sixties, when Easy Adams was the bandleader. His claim to fame was writing the 'Bandera Waltz.' They played country, cowboy, Western music.

"About 14 years ago, Ray Sczepanik from the band gave me that bus. I went to San Antone and it was sitting in a field by his house. I thought the wheels were flat, they were so sunk in the dirt. The neighborhood kids had shot out the windows and I took it like that. We shook hands and I loaded up the bus for Austin.

"Ray would come by every three or four years and say, 'Why don't you put a canopy over it?' He came by another time and said something about the windows, and I told him the developers would pay for the windows and tires to be fixed.

"In 2012, we towed the bus to a body shop in Buda and fixed all the windows and tires and touched it up some. I don't think Ray realized people like it funky, not bright and shiny. We got it back here for South by Southwest. It stood out there less than a month until I came here one morning and it was gone."

That was March 24, when shots started being traded across the river, so to speak, stoking the long-simmering feud between the San Antonio and Austin music scenes. Yet neither Ray Sczepanik nor James White wear the black villain hat here. More likely it's poor communication, economics, and a little boot-dragging by both men, who've known each other for decades, that's led to the showdown.

Ray Sczepanik took over the Texas Top Hands in 1979, having joined them in 1967. Formed in 1945, they were already veterans, starring in a Western titled Echo Ranch, and touring with Tex Ritter, Hopalong Cassidy, Gene Autry, and Hank Williams. Sczepanik worked closely with bandleader Easy Adams in the middle years, and when Adams handed off the band to him, the bus came with it. The Texas Western Swing Hall of Fame inducted the group in 1992.

Sczepanik, who holds the title to the vehicle, seems quite content with its current location in Adkins, a largely undeveloped area east of San Antonio off Loop 1604. The bus now sits under a roof, that of a 17,000-square-foot barbecue joint, dance hall, and tourist attraction. Another rustic photo op for another locale?