On his website, Bob Schneider self-deprecatingly comments that his new album – the 11th in a line of studio recordings – came out "great." The fact that he's mastered most music genres effortlessly remains simultaneously exciting and annoying, so Burden of Proof comes with its own challenge: living up to its title. Schneider wins that toss, too, only this time he does more with less, making canny use of Danny Levin and Tosca within reflective songs like "The White Moon," "Unpromised Land," "John Lennon," and "The Good Fight." Proof also finds Schneider pensive on opener "Digging for Icicles," as if the preeminent Austin Music Awards winner decided to poach Tom Waits territory without trying to imitate him. "The songs that you write right after you break up are the worst songs you will write in your life, and you think they're the best songs," Schneider snarks during online commentary for the wistful "Swimming in the Sea," yet he moves beyond cliches on "Wish the Wind Would Blow Me," delicately tossed with Tosca's elegant strings. And if Schneider's biggest challenge was to follow his own SRO brilliance of the line, "You're the color of the colored part of The Wizard of Oz" from 2009's "40 Dogs," he does so this time not in his own words, but in the plaintive lyrics of "Tomorrow" from Annie, completed in under two minutes. All of which leads to obvious conclusions about Schneider's development as an artist over the last two decades. At 47, he's shed the chameleon's closet of skins and images that have sustained his success locally, from irresistible foulmouth and sexy funkmaster to country crooner, sensitive dad, and now the pensive poet – all without leaving a shadow of doubt that Bob Schneider is, in fact, all of those things. And knows it. 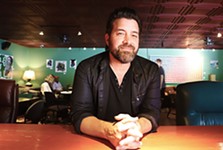 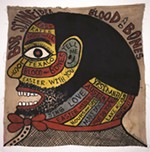