Following up a breakthrough LP ain't easy. Make Up, Wiretree's third album, launched the Austin quartet into the top tier of guitar poppers both local and national on the strength of its songs and performances. Get Up, the difficult fourth album, solidifies its predecessor's success while building on its gains. Bandleader Kevin Peroni allows folk influences to infiltrate his usual pure-pop writing, giving "Doctor" and the title track an ethereal earthiness in the vein of the recent acid folk revival. Though the folk flavor gets toned down, the winsomeness carries over to "Marching Band" and the lovely "When You Were Young," pop gems both. For purists, Wiretee also hits a new peak of power-pop mastery, as "To the Moon," "Out of My Mind," and "So Bold" represent the band's best, loudest, and catchiest tunes yet. The disc further features Peroni's first full-scale epic with "In the City (Rail)," a multi-sectioned journey through its creator's musical consciousness that demonstrates the band's hard-earned musical facility. Less immediately gratifying than Make Up, the ambitious, eclectic Get Up reveals its pleasures through repeated spins, insinuating itself intellectually at first, but eventually settling permanently into the heart. (Wiretree's album release party, also starring the Lennings and Grand Marais, happens upstairs at Lamberts, Friday, July 19, 10pm.) 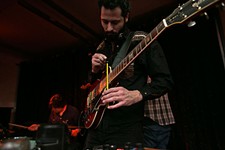 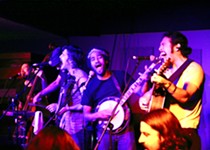