Trouble Will Find Me (4AD)

Trouble Will Find Me (4AD)


No one beats themselves up as beautifully as Matt Berninger. The National frontman's sinking baritone, which drowns conflicted angst like last call, defines the Brooklyn quintet, and yet their sixth album manages to avoid the usual shelf life of self-loathing that comes with maturity – of audiences as well as bands. Trouble subdues against the power of 2010's High Violet, but also spikes Berninger's typically cryptic lyrics with a self-aware levity, continually deflating the seriousness of emotion without dissolving any of the dramatic affect. Opener "I Should Live in Salt" unloads a gorgeous moan of regret that drops into the darkness of "Demons," with the Dessner and Devendorf brothers maintaining restrained arrangements. Sparse guitars on "This Is the Last Time," "Slipped," and "I Need My Girl" hypnotize into suave swells, while piano ballads "Heavenfaced" and "Pink Rabbits" cut even rawer. Berninger peppers allusions throughout, both elevating and deflating the band's seriousness amid his mused misery. "Demons" finds "alligators in the sewers," with further nods ranging from Let It Be and Nevermind ("Don't Swallow the Cap") to Blue Velvet ("Humiliation") and Elliott Smith's "Needle in the Hay" ("Fireproof"). Likewise, Berninger turns brilliant inversions of sentiment with "Sea of Love," playing off the 1959 song, and on stunningly stripped closer "Hard to Find," the Violent Femmes' "Kiss Off." At its Austin City Limits taping in 2010, the National reveled in self-effacing jokes between the heaviness of their songs, and Trouble finally finds that balance on disc. (The National play ACL Fest in October.) 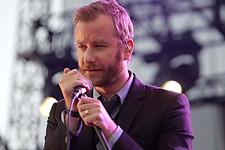