Octopus Project returns – with vocals! Plus, inside the foliage at Austin City Limits.

Years ago, someone described the Octopus Project to me as "musical mad scientists who make masks and play theremins." My interest sufficiently piqued, I sought out a show that ended up dazzling my senses, not just aurally – jubilant, analog-spiked, experimental robot rock so futuristic it makes the concept of progressive seem retro – but also the elaborate aesthetic of the local quartet's stage show, videos, and overall conduct.

Four years later, we're eating breakfast in a dimly lit Mexican restaurant and discussing the video for "Whitby," a song off their fifth album Fever Forms, in stores Tuesday. The group describes making the 4,000-frame stop-motion short as "no big deal, pretty easy," so I'm only somewhat surprised to learn that the fabric monsters, video screens, and speaker covers used for the band's live performances, as well as their stereoscopic promotional imagery, are conceived and manufactured internally.

"Who else would make it?," deadpans Toto Miranda. I respond by asking how often they shop at Hobby Lobby.

"All the time!" says analog sorceress and band theremin-charmer Yvonne Lambert, whose hairdo looks like the unit symbol for ohm. "Probably more than we should."

Home Depot and Jo-Ann Fabrics are also staples, but soon Lambert and crew are describing the collaborative process behind their music and visual hijinks as filling a bucket of creative bits: demo recordings, sketches, possible stage gags. Once said vessel sloshes over, all four members – Miranda, wedded Octopodes Yvonne and Josh Lambert, and Ryan Figg – convene to combine the good and shove off the bad.

"Oh Jesus," Josh Lambert shudders. They all know his response.

"We thought it was brilliant and super hilarious to play a sample of people booing between songs rather than clapping," he explains. "When we applied it live, everybody in the audience was looking around like, 'Who's being an asshole?' It wasn't funny at all, and it ruined the show."

That happened a decade ago at a club called Le Privilege, where Mohawk stands today. On Saturday, the Octopus Project returns to that same spot to celebrate Fever Forms, a potential fan favorite chock-full of dramatic, circuit-bent, electro instrumentals plus an extra helping of vocal-driven pop and rock songs.

Naturally, the band produced the album themselves and also designed the album cover, which looks like they tried to re-create 13th Floor Elevators art using only pieces of construction paper. That's proof you can do a lot with eight arms working together.

Watching this season of Austin City Limits, I've noticed a subtle difference in on-set scenery: All the houseplants that once decorated the stage have disappeared. Also missing is that tree branch that once hung over the camera track that, as the PBS program opened, framed the stage's trademark shot.

"The illusion's been lost," explained ACL Executive Producer Terry Lickona when I dropped by the Second Street studio to inquire about the herbicide. "The original idea, so many years ago, was to make the show look like it was shot in a natural setting. So we put plants on the stage."

With a fabricated backdrop of the Austin skyline, the tree-branch camera trick, and copious fake foliage on the bandstand, the longstanding show did kinda, sorta, maybe look like it was filmed inside a park. Enough, at least, to fool Paul McCartney, who, when discussing Austin with local radio personality Jody Denberg in 2010, offered: "I hear it's a great music town. I've seen the TV show. ... They film that outside, right?"

Not quite, Sir Paul.

For 34 years, ACL filmed inside Studio 6A on the University of Texas campus. The show moved Downtown to the Moody Theater in 2010, and the branch, awkwardly held up on a vice, became a sight-line obstruction that had to be repeatedly trimmed down until it looked, as Lickona described, "pathetic." The branch got deforested late last year, and all remaining greenery was removed in March to improve camera angles.

Lickona insists that no one cares ("We haven't had anyone picketing outside saying, 'Bring back the plants!'"), but I was interested in their whereabouts, so we ventured around the Moody's back corridors and found the plants in a massive cage on the third floor, synthetic leaves as green and healthy as ever. Lickona stared at them and recalled when Arcade Fire taped in 2011 and band multi-instrumentalist William Butler yanked a plant out of its pot to use it as a drumstick.

When asked where they'll ultimately end up, Lickona theorizes they might be sold off at a pledge drive.

"We are, after all, in public television," he shrugged.

I shrugged, too. I was hoping I could take them home with me.

Additional searches for the branch proved fruitless and brief. Lickona and his crew had pressing concerns: They're hosting Scottish R&B sensation Emeli Sandé, currently enjoying a monster international hit with "Next to Me," this Sunday. For those who couldn't snag passes, the performance will stream live on ACL's YouTube channel before re-airing during the show's 39th season, beginning in October – a season that will include local psych shamans the Black Angels, who load in on August 28.

› Senator Wendy Davis' epic filibuster last week to derail a proposal that would limit abortion rights was reminiscent of magician David Blaine's famous feats of endurance – except she has a cause. The Fort Worth politician's boldness inspired tributes from Austin musicians including the Bright Light Social Hour, which released an instrumental groove synced with recordings of pro-choice supporters chanting "Wendy! Wendy!" A parody of Kim Carnes' "Bette Davis Eyes" called, you guessed it, "Wendy Davis Eyes," written by Melody Simon and sung by Lance Keltner of Dumpster Kitten Productions, followed. The most profound tune came from local mandolinist Silas Lowe, who offered a Joe Hill-like protest song called "Didn't She Stand." Its final verse encourages continued action: "Now all that we can do is to keep on marching on until the patriarchs and tyrants of Texas are all gone."

› Local indie bard Shakey Graves recently confirmed a tour with rising alt.country duo Shovels & Rope, scheduled to hit large clubs in the Midwest, East Coast, and Canada throughout September. Graves just completed a national tour with fellow Austinites Marmalakes and Wild Child, selling out shows in Chicago, Washington, D.C., and New York. "The tour was an American dream, somewhere between a family vacation and a nationwide pub crawl," Graves told "Playback." "We were smothered in the sweet bosom of American hospitality." 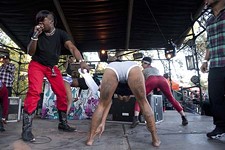