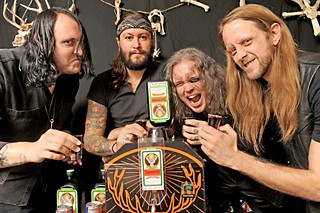 One time in 1996 at the Hole in the Wall, Hunter Darby watched a performing guitarist take a shot of Jägermeister, put the shot glass down, and, with his electric guitar strapped around his neck, execute a perfect backflip off the stage and land feet first on the floor of the Drag-bound bar.

A month later at the venue, Darby was recounting the flip to a fellow regular when he noticed that same musician walk into the bar and set his gear down beside the stage. Darby offered him another shot and challenged him to complete the flip again. In true rock star fashion, the guy swigged back the ounce-and-a-half of German liqueur before leaping into the air.

This time, he didn't make it.

His back hit the edge of a barroom table, and he thudded to the floor in a coiled ball. The guitarist, who Darby describes as "a public enough figure that he wouldn't appreciate me telling this story," still sees a chiropractor for that injury every single week.

"Some gave more than others," nods Darby, Wannabes bassist for going on three decades now and a manager at the Dog & Duck.

The Nineties were some hazy days at the venerable UT institution of music and mayhem. And while it was stocked to the gills each week with scotch, schnapps, and Seagrams, the juice driving the Hole mad was that syrupy substance affectionately known as Jäger, liquid black licorice mythically fueled by deer blood.

"I think it was the absinthe of the 20th century," Darby proclaims. "The laws back then weren't quite as stiff on all kinds of public bad behavior."

Developed in 1934 by Curt Mast, the son of a vinegar and wine maker named Wilhelm Mast, the highly secretive, 56-plus-ingredient Jägermeister opened onto the European market a year later, when the Nazis had already begun their land grabs.

In fact, the liqueur was once so closely tied to the party that Mast named it Jäger­meister after reichsjägermeister, "master of the hunt," an unofficially recognized government position that mostly meant you could attend Nazi parties in various district lodges. Jäger's logo of a deer with full antlers gave rise to the belief that there's actual deer blood in the mix.

Jägermeister was hailed immediately after going to market: an intense blend of herbs, blooms, and roots, with cinnamon barks from Ceylon and bitter orange skins from Australia. Mast grabbed a lot of other components the company's press team would never dare tell any investigating journalist. He macerated each batch six times with a 70% alcohol-to-water ratio, aged those batches in wooden oak casks for a year, then mixed the alcohol, sugar, caramel, and softened water to produce the sweet, syrupy devil's juice that we all know and sometimes love today.

Not until after World War II, in the early Fifties, did people outside Germany start picking up on the drink. Credit Mast's nephew Günter for that. He began sponsoring German sports teams, eventually catching the eye of New York entrepreneur Sid­ney Frank, who, in 1974, started shilling it around the States.

Today, Jägermeister is the highest-selling imported cordial in the country and seventh highest-selling spirit worldwide, and bands, many of whom have been contacted by the company for sponsorship opportunities, are reaping the benefits.

British death squad Defiled reports from the road of a European tour that a Jägermeister endorsement has given the band the chance to fund videos, print T-shirts, and secure recording space.

"Really, it was the kickstart we needed," offers lead singer Stitch D, a close friend of Austin metalists Ancient VVisdom. "Any idea you have as a band, you can approach them and say, 'Hey, you into this?' We just signed our first worldwide record deal, and I do not think we could have reached this point without them."

"That shit used to fly off the shelves," affirms Jared Cannon of Red 7, home to many metal and hardcore shows over the years. "All the hardcore kids who were new-ish to drinking would drink it quite a bit."

He says the venue's cut back on Jäger sales of late; they do about one 750 ml. bottle a week. Dirty Dog Bar, a popular metal destination on Sixth Street, does a case (12 bottles).

"Jägermeister definitely has an acquired taste," offers singer Kike of local South American speed metal transplants Head­crusher. "However, once you've acquired a taste for it, it's difficult to drink anything else. We've been in Austin for five years, and I have to say some of our blurriest nights have been under the effect of this mysterious alcoholic beverage. I have helplessly seen my bandmates regurgitate this dark purple cough syrup solution in cars, clubs, beds, parks, or on themselves.

"I have personally tried several strategies in order to stay sober while intaking Jäger­meister and always failed at remaining lucid."

Ditto for Ancient VVisdom brothers Michael the Dark Angel and Nathan Opposition, who live together and keep a Jägermeister dispenser, one of those black tap machines that dispenses shots at temperatures below zero, in their kitchen.

"It's different than whiskey," explains Opposition. "With whiskey, I always end up getting mean and blacking out. One or two [Jäger shots] before I play, and that usually sets the party."

"You don't want to take it too far before you play," Opposition lectures. "Afterwards, it's a different story."

Beerland, Hotel Vegas, Mohawk, White Horse: Wherever the scene centralizes, the modern iteration of the former Hole in the Wall crowd – Austin's so-called "indie" rockers – haven't quite taken up the Jägermeister standard today.

"I stopped drinking cough syrup in junior high," dismisses Logan. "[Jägermeister] tastes like an old bag smells, and Jäger bombs are hard to even give away. There's only one instance where I would drink Jäger these days, and that's in Germany with a local."

Much of the crowd's abhorrence may be the result of similar experiences to the one endured by Bobby Jealousy/A Giant Dog chief maven Sabrina Ellis, who drank Jägermeister for the first – and last – time when she was 18, after having just moved from Houston to New York.

"I walked into a bar on St. Marks and was so young that I didn't know what to drink," she writes. "Jäger was on special at $2 a shot. I thought the Irish bartender was handsome, so I went and drank shot after shot," until she coerced the bartender into giving her his number.

That's when things quickly went south: Ellis came to while she was vomiting in the bathroom.

"I remember grabbing my things and puking the whole way home," she continues. "It's good in New York how they have those trash cans on the sidewalks.

"When I woke up the next morning, I found the matchbook, but it didn't have his phone number in it. Did it ever? Did he switch matchbooks on me when I ran to puke? Who knows. I've never touched Jäger again."

When Jägermeister made its big push into Texas in the mid-Nineties, Hunter Darby's Wannabes got some play at their home bar.

"They'd have the Jägerettes," he says. "Women wearing deer antlers on their heads."

He pauses, recalling the scene.

"Usually it would induce a lot of vomiting behind amps. I don't know who at the Hole in the Wall had to clean the pool tables. At the time, they only had one bathroom, and there were some bad Jägermeister moments when – I'll own up to it: I did it before, myself – when people would use a pool table pocket during those moments when you've had 'a reversal of fortune.'

"You couldn't get to the bathroom, so you'd head for the corner pocket."

The Hole in the Wall crowd was a wildly unhealthy one back then, complete with bands like Wad, the Hickoids, Pocket FishRmen, Wannabes, and any act that showcased Gretchen Phillips (revisit "How I Spent My Last 20 Years," July 19, 2002).

"We were just so poor," says Darby. "Somebody would say they're buying shots, and you wouldn't even ask."

That might have been partly why so many groups were gunning for a spot to play the hallowed haunt. Bartenders would stock the right side of the stage with black trays of Jägermeister shots, and band members would jockey for position in an effort to get their hands on more than one.

"People thought it was refreshing in the summer, because they always had it chilled, and refreshing in the winter, because it felt like cough syrup," Darby recalls. "There were all these horrible shots we invented at the time. Someone had a JFK: Jack Daniels, Frangelico, and Kahlua, layered like that. If you wanted the JFK Assassination, you'd get a shot of Jäger on the side."

For all its debauchery, the Hole in the Wall's Jägermeister heyday lasted only four years.

"I think we got too old," he says. "It beat your innards so bad you eventually just stopped seeing people take Jäger shots. I guess most switched to vodka."

Malcolm "Papa Mali" Welbourne blearily remembers the time his longtime reggae band the Killer Bees got introduced to Jägermeister. It was sometime in the mid-Eighties, when marketers at the company wanted to promote their product through the band.

"The proposed tie-in to our band was that they also had a product called Bärenjäger, which was made with honey and had a beehive on the label," Mali writes via email. "As the band's founder, I was usually cautious about any sort of corporate ties that could be perceived as a sell-out or commercialization."

Band manager Louis Meyers, one of the four principal founders of South by Southwest and now the executive director of the Folk Alliance in Memphis, remembers the rationale for rejecting the offer a bit differently.

"I was just tired of having a drunk band."

1) Get started right: an ice cold shot of Jäger, chilled, straight up.

2) In the same order, get a Jäger and Red Bull. This will be a larger pour than a shot, so sip it, take a lap. The buzz is light and calm. Relax and let the night unfold.

3) Move location. The place you're at is probably cool, but a change of scenery will do you some good. Maybe hit up a patio while you ready yourself for another Jäger and Red Bull. Take this one down quick with a cold beer chaser.

4) Now you're feeling good. You should be. You've earned it. You've also earned yourself another chilled Jäger shot! This time, buy the person next to you a shot, whether you know them or not. Trust me, it'll send your night down a whole new path.

5) Go to a show! There's always one to bang your head to in Austin. Order a shot and a beer and move up front!

6) The music's over. The night seems to be winding down ... until I make the announcement, "Party at our place! We have a Jäger machine!" Cheers, and drink safe.