An interview with Italian producer Giorgio Moroder introduces the third track of Random Access Memories. Just before the beat drops, the famed dance puppeteer sums up Daft Punk's fourth LP: "Once you free your mind about a concept of harmony and music being correct, you can do whatever you want." RAM beats a lot of disco, a liberal dose of camp, and bleats nothing but a vocoder to mark it as traditional Daft Punk. And yet, in an age where their brand of electronica has touched off its own DIY revolution, the helmeted French duo flip the script and make disco cool again. An all-star cast of collaborators cue up, including club greats like the aforementioned Moroder, Chilly Gonzales, and Nile Rodgers, alongside Pharrell Williams' Midas touch. It's a calculated disc, plucking from the very best in production, and polished with OCD precision. Mother of all singles, "Get Lucky," which dropped shortly before the album's release, refuses to tire, propelled forward by a sparkling Seventies guitar riff and Williams' falsetto. Despite that preview, RAM doesn't deal in radio singles. Famed composing sprite Paul Williams croons "Touch" out of a vaudeville breakdown, while dance-tempo cuts "Give Life Back to Music" and "Lose Yourself to Dance" keep their distance enough to keep listeners coming back. RAM has the immediate appeal of disco, but never overstuffs with candied hooks, even when we want it to. 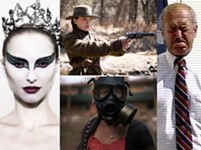