"God is dead," proclaims Ozzy Osbourne in the eponymous, debut single from 13, the first Black Sabbath studio album in 35 years to feature the singer alongside original demons Tony Iommi (guitar) and Terry "Geezer" Butler (bass). Nietzschean proclamation or ham-fisted provocation? As with all things Sabbath, it's difficult to say. The balance between sinister conviction and cheap thrills remains the UK quartet's most ingenious trick when they pull it off successfully. Osbourne sings better than he has in years, but also holds back, his signature howl kept in check. The music roils and rumbles, allowing the group's folk roots to peek through, but it only sometimes rages or roars. Iommi remains the riff master of doom, and if Butler's lyrics on "Live Forever," "Pariah" (on the deluxe edition), and "Damaged Soul" struggle to sound inspired, the guitarist's barrel-chested slash 'n' grunge erases any trepidation. When all fires burn bright, as on crunchy anthem "End of the Beginning," blazing stormer "Methademic" (another bonus-only cut), and the pretty ballad "Zeitgeist," that old black magic casts its wicked spell once again. Hailed as the band's final LP, the best of 13 raises hope that it's a cauldron, not a coffin. (Black Sabbath holds service at the Erwin Center, Saturday, July 27.) 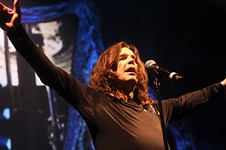