Playback: In a New York State of Mind 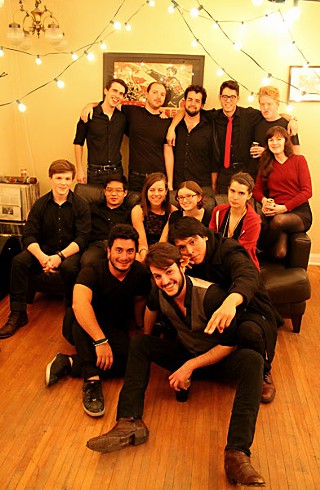 When you're local indie-pop orchestra Mother Falcon, and your band's the size of a soccer team, everything becomes more complicated: ordering food, dividing up the drink tickets, assembling band members for a photo, and, more than anything else, touring.

Riding the momentum of their May sophomore release, You Knew, which introduced the young, black-clad anti-band-geeks as Austin's newest NPR darlings, Mother Falcon embarked on a cleverly booked tour allowing them to play 15 East Coast shows in one month without spending all their time and money on gas, road munchies, and low-budget hotels. The band also subleased an apartment in New York City: a two-story brownstone in the working-class neighborhood of Ridgewood, Queens.

"Some of our neighbors are probably wondering who we are," violinist Maurice Chammah admitted while in line at Brooklyn's Di Fara Pizza. "Especially when we all leave [the apartment] wearing black, like some kind of gang."

The 17-person travel team has spent the past few weeks alternating between two Gotham residencies and hopping in the band vans to play nearby cities like Boston, Philadelphia, and Washington, D.C.

"We're minimizing the number of times we have to line our schedules up and [we're making] everything we do count a lot more," explained multi-instrumentalist Matt Puckett. "I've heard it's the fourth time you come through a city that you start to make an impact. We can't afford to tour through here four times, so we brainstormed a way to do it all in one trip."

Mother Falcon ditches the Big Apple on June 30, allowing them a month back home before heading out to Los Angeles for another one of these uniquely arranged tours. 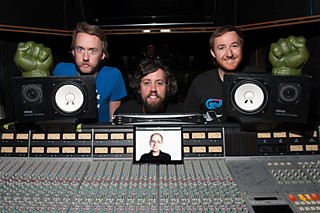 (l-r) Gibson, Cargal, and Terrell, with digital Ezrin (Courtesy of Not in the Face)

Holed up in a Vancouver studio working on his band's next EP, Not in the Face singer Jonathan Terrell recalled the first time he met famed record producer Bob Ezrin.

"I was pretty nervous," Terrell recounted. "He kept handing me instruments to try out, and then he'd say, 'Oh yeah, that's the bass that Roger Waters played on The Wall,' or 'Cool, Lou Reed played that guitar on Berlin.' You just kind of laugh like it's no big deal, but inside you're fuzzing out because you're casually holding rock & roll history."

In addition to Ezrin, who also holds credits with Kiss and Alice Cooper, studio protégé Garth Richardson adds time-tested credits like Rage Against the Machine's debut and the Melvin's Houdini. The two spent most of June working with Terrell and his Not in the Face crew, which includes drummer Wes Cargal and guitarist Michael Anthony Gibson, for the band's still-unnamed EP, the hard-rocking trio's first recorded output since last year's Walk EP. Ezrin's actually overseeing the project from Nashvlle via Skype, phone, and email, but he remains integral, guiding the group through a series of grueling, 12-hour-plus workdays.

"Two of the greatest living producers are challenging the shit out of us," Terrell said. "You think these Texas boys are gonna back down? No dice. [Ezrin] and Garth are fucking geniuses. They care so much about the song. It's been an honor to watch them work with ours."

Pre-order NITF's new EP by chipping in to the band's PledgeMusic fundraiser. Rewards include handcrafted jorts and a dinner with Bob Ezrin.

Typically, if you want to see Dale Watson and his Lonestars play on a Monday, you have to go to the Continental Club.

This week, Watson's iconic silver pompadour can be seen from the comfort of your couch, where the local honky-tonk hero is surprisingly set to perform on CBS' Late Show With David Letterman.

"I never thought late-night shows would be open to me," admitted Watson, now 50. "I play roots stuff, not flavor-of-the-day music."

Word has it that the invitation to play came directly from Big Dave himself, who heard the Lone Star stalwart on SiriusXM radio and ordered his assistant to book him for the show. The longtime host seems to have an affinity for Texas songwriters, personally requesting Ray Wylie Hubbard to perform earlier this year.

Watson will perform "I Lie When I Drink," a track off his recently released El Rancho Azul. Afterward, Watson jets west for four dates with Old Crow Medicine Show.

Black Joe on the Green

Black Joe Lewis & the Honeybears play their only Austin show this summer Wednesday evening in Zilker Park for KGSR's Blues on the Green. The local soul shouter recently unleashed a screaming new track called "Skulldiggin" that, with its unholy fuzz riffage and loud, loud lyrics, lands closer to psych-metal than the funked-out soul of his first two albums.

Asked if the single foreshadows a change in direction, Lewis offered: "The record overall is a lot harder, but it's still got some soul and blues. We have a new drummer, and I'm the only guitarist now, so it feels a little different. But I think it's our best work yet, because the vibe is so strong."

Electric Slave hits shelves August 27 on Vagrant Records, after which Lewis hauls away on a nationwide tour.

› Robert Plant, who hits ACL Live at the Moody Theater Sunday for a sold-out show with his Sensational Space Shifters, will donate the concert's entire profits to Teen Cancer America and the Health Alliance for Austin Musicians. It will be the second time the famed Led Zeppelin frontman writes a check to HAAM: He and main squeeze Patty Griffin graciously donated proceeds from an intimate December performance at the Continental Club to the local medical insurance program for musicians. "Their support has gone so much further than that show alone," noted HAAM Executive Director Carolyn Schwarz. "Their interest has helped raise awareness among supporters who would have never heard about us otherwise. Also, we have received donations in their honor that we know are a direct result of their support."

› While the rap scene in neighboring Houston has a big reputation, bigger names, and one truly screwed-up style, Austin's own hip-hop community has always struggled to maintain momentum. On Saturday, the Chronicle showcases some of our favorite local hip-hop acts through a free, all-ages throwdown at the Scoot Inn that includes the League of Extraordinary G'z, Kydd Jones, 10YR, KB the Boo Bonic, Phranchyze, Krypol Haze, and upstarts Magna Carda. Both grills and mics start cooking at 5pm. More information in this week's Music listings.

› Earlier this month, the Board of Trustees of the Recording Academy elected Christine Albert the chair of the board of trustees for the Grammys, an honor that makes the local singer-songwriter the second female to ever hold that role. The distinction means that Albert will now head up the organizational meetings centered around the Grammys' longstanding focus on music preservation and education, as well as its running of the MusiCares charity, a foundation that provides financial assistance to musicians facing hardships. "I love the foundation and the work they do," she says. "I got involved to stay connected with the local community, and now I'm proud to be part of their national voice."

› Fun Fun Fun Fest announced its first round of lineup leaks last night, revealing that the eighth running of the beloved November festival will include Ice-T, the Walkmen, Bonobo, Judge, and Brooklyn quintet the Julie Ruin, the newest project from Bikini Kill's Kathleen Hanna.

Come and Take It
Black Joe Lewis & the Honeybears dare you