"Tonight we signed to The End Records," announced bassist/singer Mike Hardin between his lovingly half-assed stage ramblings about cocaine and Satan. "We're really happy to be part of a family now."

There was a special feeling in the room that night, like we were seeing a shift in Austin's music scene. Maybe that energy comes from witnessing a great rock show, but the local trio – true do-it-yourselfers who've only released two songs yet gained attention on the strength of their live shows – met the atmosphere with an equally volcanic performance. Hardin belted lyrics with MC5 excitement, while guitarist Will Ellis wailed mean, metallic solos with punk brevity, and Nick Cornetti cemented the Sharks' sound with his unique "precision caveman" drumming style. It all added up to gloriously dark, fast, stoner rock & roll.

Among the music cognoscenti that descended on the Eastside haunt were members of the Sword, a sort of big-brother band to the Sharks, as well as an older, well-dressed European gentleman named Andreas Katsambas, who founded the band's new label, a 15-year-old imprint whose roster includes Danzig, the Dandy Warhols, Fatboy Slim, and the Halo video game soundtrack. He and the band inked their contract on a picnic table in Hotel Vegas' backyard.

"I've had their album for a while, so I was familiar with the music," Katsambas told me by phone. "But seeing it live brought it to a different level. The energy was just primal, and, because the songs are so short and fast, it felt like I was taking shots back to back."

The Sharks' deal with The End guarantees two albums and national distribution. The band had recently turned down a similar offer from Volcom Entertainment, which represents local punk export the Riverboat Gamblers, in favor of maintaining ownership of their masters, not surprising considering drummer Cornetti owns his own label, Pau Wau Records. The homegrown imprint celebrates the signing with a deluxe re-press of the band's Weedwizard 7-inch on splatter green vinyl that comes with a free weed grinder.

American Sharks tour the U.S. this fall with stoner-metal stalwarts Clutch and the Sword, with the package hitting Emo's Nov. 5. Tickets go on sale Friday.

Chaos in Tejas draws an extraordinary crowd. Throughout last weekend's wild festival, I met interesting, educated, and only moderately smelly folks from Canada, Australia, Japan, and England, who all came here for the exceptional collection of substream punk, metal, experimental, indie, and hip-hop that only an obsessive music fan like festival co-founder Timmy Hefner could assemble.

The 1100 Warehouse (1100 E. Fifth) proved a welcome addition to the festival, now in its ninth year, hosting Chaos' biggest shows in an appropriately black-market environment. Conversely, the largely unannounced shows on the Pfluger Pedestrian Bridge proved too cool for their own good. Hundreds gathered on the footbridge Thursday for a generator-powered afterparty, which the Austin Police Department eventually shut down. The next night, a group of punks, myself included, stood there scratching our heads and asking "Where's the show?" A patrol cop told us the city had not permitted the show and that it's unsafe to hold a concert on the bridge. Does that mean the long-running practice of guerrilla bridge shows will cease forever? I doubt it.

Other festival highlights included Japanese hardcore act Framtid and a series of local acts, including postpunk trio Spray Paint who, last year, played to 10 people at the Scoot Inn during Chaos and this year ignited a crowded Beerland with their demented guitar voicings, skittering backward punk beats, and awesomely apathetic group vocal delivery.

› Austin native Kathy Valentine filed a lawsuit against her band the Go-Go's, alleging that the other bandmembers of the seminal girl group sidestepped a pre-existing contract that entitled the group's bassist 20% of the future revenue. Asked whether she thought she'd play with them again, Valentine replied, "I have no idea what the future holds in terms of the Go-Gos." For now, she's assembled a new band, which features onetime Hole drummer Patty Schemel, to play the opening of a Women Who Rock exhibit next week in Seattle. Her local outfit the Bluebonnets sprout up at the Continental Club every Tuesday in July.

› A new local release pays tribute to late, great songwriter Jason Molina of Magnolia Electric Co. and Songs: Ohia. Lone Star Horizons, assembled by local rocker Randy Reynolds (formerly Leatherbag), features covers of Molina's stirring ballads by a series of Texas bands, including locals Some Say Leland, the Blurries, and White Denim's James Petralli, whose Cyber Dads lends a sweet electro rework of "Just a Spark." Reynolds credits Molina as the artist who "got me away from the classic rock worship of folks like Neil Young and Gram Parsons and showed me that the song is most important." Molina, a prolific and unique songsmith, died in March at age 39 from health problems related to his unshakable demon, alcoholism. Lone Star Horizons is available on cassette or digitally on Bandcamp, with proceeds going to Molina's medical debts.

› The Wagoneers' groundbreaking 1988 debut Stout and High, an alt.country classic, has so stood the test of time that frontman Monte Warden and the gang, once hailed by Rolling Stone's Chet Flippo as "the greatest honky-tonk band that ever was," have decided to perform it entirely and in sequence for the first time ever. The replay goes down this Sunday, 7:30pm, at the Continental Club during the Wagoneers' weekly residency.

› An anthropomorphic hard-shell taco wearing dark glasses and a white cane advertised Maria's Taco Xpress online: "The point of the matter is ... whether you can see or can't see, we all need to eat tacos." The promotion was for "El Taco Ciego" (The Blind Taco), a quarterly event organized by Richie Flores and taco queen Maria Corbalan, whose nephew is visually impaired. It benefits the local chapter for the National Federation of the Blind and Sports Vision 20/20. Not knowing what to expect, I was shocked when Flores, a blind man, led me by the shoulder toward a table of strangers in the pitch-black restaurant. For the next few hours, I fumbled through a meal, bonded with my tablemates, took part in a funny Q&A demystifying blind stereotypes, and heard musical performances by Flores' acoustic group Constellation Prize and local songstress Charlie Faye, all under the complete spell of darkness. The experience was unlike anything I've done, leaving me first feeling vulnerable, then empowered, and ultimately more aware of my senses as well as the plight of our blind neighbors. Go to one when you can. It's an eye-opening experience. 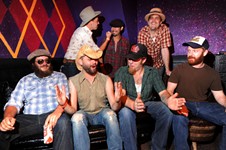