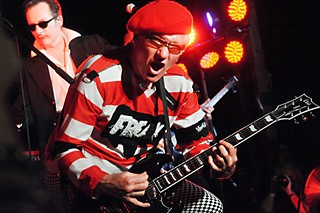 
"They couldn't afford the Sex Pistols," Damned guitarist Captain Sensible announced as his British brigade took the stage. "We're better than them anyway! Ladies and gentlemen ... how do?" On strode punk's original goth, Damned singer Dave Vanian, and the famed UK punk quintet slammed into the 1979-vintage proto-thrasher "Love Song." For the next hour, the band's tuneful roar echoed around this Eastside Quonset hut, never relenting in energy or dynamics. Deep, deep cuts got dusted: "Under the Floor Again," mid-Eighties goth-pop hits not aired since Sensible's mid-Nineties return, including "Eloise" and their cover of Love's "Alone Again Or" – even 1977's pogoriffic "Stretcher Case Baby." 1100 Warehouse got sweatier and sweatier as the Damned delivered hits with both power and precision: "New Rose," "Neat Neat Neat," then "Smash It Up." Their playing flashed the proggy, acid-drenched chops that the Damned always wielded, right down to Sensible dropping in a bit of "Voodoo Child" at one point. Even the guitarist's hilarious solo wheeze through South Pacific's "Happy Talk" got revived! No face left unsmiling, no skin clean or dry. Despite Sensible's constant digs through the set, nobody went home disappointed that he wasn't a Sex Pistol.