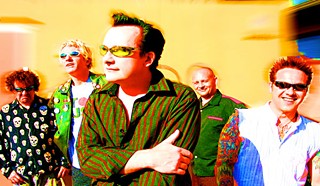 
"I didn't think punk would last five minutes to be honest," emails the Damned's manic guitarist, Captain Sensible. "I thought I'd be going back to cleaning toilets at the Fairfield Halls in Croydon."

There worked young "hippie with teeth" Ray Burns when co-worker Chris Millar returned from an audition in London, bearing severely cropped hair and a new stage name, Rat Scabies. Guitarist Brian James, responsible for Scabies' haircut and name change, "had a vision of the future in which hippie haircuts were not going to play any part," according to Burns.

"I soon found out there was also a bassist vacancy," he adds.

That found Burns similarly transformed into Captain Sensible, and, alongside Draculoid vocalist Dave Vanian, the four became the most explosive and humorous wrecking machine in English punk rock. The first UK punk single ("New Rose") on the UK's first indie punk imprint (Stiff Records); the first UK punk LP (Damned Damned Damned); the first UK punks to play the U.S. in 1977; the first to split up in 1977 – and first to reform in 1978 – the Damned set the standard.

"What I like about the UK 'class of '77' is that the bands all sounded different, had their own version of punk," writes Sensible. "Most members of '77 bands had been at the Ramones' London gig a year or so earlier. That kickstarted the whole scene. Theirs was a spectacular fusing of wall of noise, garage, and pop music.

"But the Stranglers sounded nothing like the Buzzcocks, who were in turn quite different to the Clash. We all agreed on one thing though, and that was that the old dinosaur acts like ELP and Yes were past their sell-by date and they could take their 20-minute drum solos and songs about wizards and pixies and fuck right off.

"I was lucky punk came along, as I wouldn't have lasted long in a Seventies rock band. Not that I'd have wanted to. Me and punk were made for each other. It's all about stretching yourself and making something fabulous out of a minimum of fancy electronics, gizmos, and fancy studios."

Sensible advises that Chaos in Tejas audiences will be treated to a set "covering all periods of Damned history, including adrenaline-fueled punk, anthemic goth, and some psyched-out improvising to keep us on our toes musically." Joining Sensible and singer Vanian are longstanding members Monty Oxy Moron (keyboards), Pinch (drums), and Stu West (bass). Sensible also promises a trademark wardrobe he says still features the pink gorilla costume ("needs a wash, tho") and 10 red berets he "purchased from a tourist shop near Paris Notre Dame Cathedral recently."