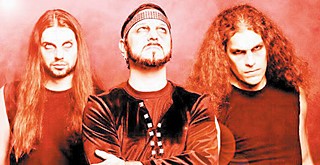 References to arcane texts aren’t just set dressing, but rather a lifelong study for McGovern. From age 12, he immersed himself in ancient lore and modern conjuration, calling the Typhonian Trilogies by 20th century mystic Kenneth Grant “a favorite inspiration of mine.”

“I then became beguiled by the tracing of our ancestral attributions,” he writes. “Mainly Scotch/Irish, which formulated the lyrical conceptions of Celtic lore.”

When the urge to reincarnate Absu emerged in 2007, he attempted to summon seminal members and co-celebrants of 2001 masterwork Tara, guitarists Shaftiel and Equitant Ifernain.

“[They] didn’t show any interest, which was perfectly fine. So yes, it was definitely starting over as a new band.”

It took failed experiments with four guitarists until he found “the perfect union for live performances.” Joined in the ritual by guitarist Vis Crom and bassist Ezezu, McGovern’s studies have shifted from Northern Europe to Sumeria.

Those secrets now lie in the midst of a three-album invocation – Absu, Abzu, and the foretold Apsu – unleashed in part in the trio’s second-ever video, the chthonic and Chthonian “Hall of the Masters,” released through Adult Swim’s William Street Records. Its swirling tentacles and dark summoning result from surprising inspiration.

“The folks at Adult Swim decided to create a video for that song, so it is more their video than an Absu video,” emails the drummer. “With a slight dash of my approval.”