David Wingo at the crossroads 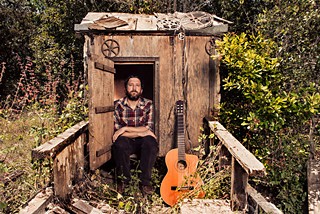 The field across the street from David Wingo's house rises in a tangle of branches and brambles. His dog, Junebug, an affectionate pit bull mix with a slick golden coat, noses around at the edge of the thickets as her owner watches from his front porch.

An oddly undeveloped patch of land just off of South First Street, its backdrop boasts the Austin skyline looming tightly against the treetops. The afternoon stills into a deceptive quiet except for the passing trains that call from the near distance. It's a peacefulness that won't last much longer.

Wingo, who turns 38 on Monday, notes that the lots just north of the house are already slated to be sold, with new apartment buildings presumably on the horizon of progress. He reckons in another year he and his wife, Magali, will have to search out a new haven within the city. It's a crossroad similar to his musical juncture.

"This next year might be the first time that I have to make hard choices," he admits. "I don't know. It hasn't been a whole lot of hard choices yet."

He pauses and picks at the chin of his beard, the patch wearing white as if from the rubbing. There's a hesitation as he follows out his thoughts, a start-and-stop of sentences that strikes as more not wanting to define ambitions and what might happen next than any sense of apprehensiveness.

"Up until now, it's been about following wherever I felt like the momentum was," he finally offers. "Now, it's seeing if I can do both."

The name Ola Podrida harbors nostalgic reverberations for a certain generation of North Texans. It was the moniker of a hodgepodge craft mall just north of Dallas, a gigantic space filled with glass blowers, painters, and a cross-section of multicultural artists. Loitering among its stalls, which were shut down in 1996, was a rite of passage for Wingo and his friends.

"When we first started playing, we decided we wanted to name the band something esoteric and that only Dallas people would get," he laughs. "It almost became a bad in-joke at the end of the day."

The North Dallas suburb of Richardson also served as backdrop to Wingo's friendship with David Gordon Green, the two growing up together while parsing in different artistic directions. After graduation, they both moved to Austin to attend UT, though Green soon left to pursue filmmaking at the North Carolina School of Arts.

"If David's dad had not moved him from Little Rock to Dallas when we were 8 years old, I have no clue what my life would be like," states Wingo. "There is zero percent chance that I would be working with music for films if I hadn't known David."

In Austin, Wingo had no concrete ambitions as a musician, but he constantly recorded tapes on his 4-track to send to friends. The largely ambient and drone-drenched guitar tracks inevitably worked their way into Green's student films. There was no grand scheme of collaboration between the two artists, just two friends who could understand each other.

"David and I have grown up speaking a similar language of music and film," notes Green. "I think at this point, we read each other's minds and have very complementary tastes. He's diverse in his abilities and interests, so the experience of our collaborations never gets stale.

The lauded release of Green's 2000 debut feature, George Washington, with original music by Wingo and fellow Austinite Michael Linnen (see "The Chord That Binds," Feb. 23, 2001), meant Wingo suddenly had notable IMDB credits. With the tide of critical attention turned toward the filmmaker, Wingo rose in the movie community.

Over the next few years, Wingo moved to Brooklyn and became the de facto composer for Green's increasingly high-profile films, including 2003's All the Real Girls and 2007's Snow Angels. The pull into his own music also grew more immediate.

"It was really about turning 30 – seeing my friends putting out records and feeling this is why I started playing music in the first place," muses Wingo. "I would write songs here and there, but I don't think I had the confidence in my 20s about what I was doing."

In a break between film projects, Wingo returned briefly to Austin in 2005 to focus on his songwriting. He enlisted Matthew Frank and Robert Patton, and together they laid down the songs for Ola Podrida's eponymous 2007 debut. Gorgeously accented acoustic folk steeped in poignant, lulling harmonies, Ola Podrida sprung onto the indie music scene seemingly out of nowhere.

Belly of the Lion

Wingo's songwriting parallels his subtle and evocative scores. And yet, the singular point of expression – the soundtrack turned inward – marks an altogether different beauty. Lyrical impressionism caught in the quiet hum of the singer's voice grasps at something ephemeral, and in its gauzy meditation reaches something deeper.

Once its bandleader moved back to New York after the recording, Ola Podrida became a loose outfit adding former American Analog Set and current Wooden Birds Austinite Andrew Kenny on bass (see "Free as a Bird," Aug. 12, 2011). Between the demands of all of the members' various projects, the band never quite coalesced into a long-term touring outfit, even as 2009's sophomore effort, Belly of the Lion, expanded its sound into louder, more shoegaze reaches.

With his fiancée having to return to Holland before she could receive her visa and they could marry, and with his band scattered, Austin once again beckoned as an ideal reprieve for Wingo.

"It was out of necessity at the time, but then it became obvious that this is where we needed to be," he notes. "I loved living in Brooklyn, but my life is definitely here and making that decision felt good. And so many of my friends have moved to Austin that most of my music and film friends are here now."

Wingo's creative output became a balance between his film work and Ola Podrida, though the latter admittedly ceded attention to his success with scoring. Among his credits were Great World of Sound, Gentlemen Broncos, and Green's 2011 comedy, The Sitter. Following the release of local screenwriter and director Jeff Nichols' second film, Take Shelter, in 2011, Wingo began receiving even more cinematic offers.

"When I'm working on a film, I'm not writing songs at all, ever," says Wingo. "I'd probably be doing that a lot more if I wasn't working on music all the time for my job, but I'm getting my creative jones fixed working on film, so it's just something I'm not compelled to do.

"I feel so fortunate any time a director chooses to work with me," he continues. "There are so many aspects to film, and one aspect can throw a wrench into all of it. So I always feel indebted to a director, and I would never want to take on a film if I thought I couldn't devote myself to it in full."

A higher profile and the trust he's built with filmmakers has also led to a broader involvement in the productions. With Mud, Nichols' freshly-released third film (revisit "Clear as 'Mud,'" April 26), Wingo began working while the movie was still in script form and was on set during the filming. That helped seed his score in the paradoxical minute grandeur of the cinematography and rural southern coming-of-age narrative.

"David's able to add an emotional layer to these films that feels totally appropriate without feeling traditional," says Nichols. "David, because I don't think he was formally trained in film scoring, is able to approach the score in a very unique way. There have been several instances where I place a piece he's written into the cut and the whole thing just comes to life for me. His instincts are spot on. He's also very collaborative.

"David listened to the music that inspired me during the writing process and was able to capture the tone of the music without simply copying it. That's a rare skill."

"Now, every time I make a record, I want to do something different, because that's what I'm used to in film, and it's really gratifying," reflects Wingo. "Much of what I love about film scoring is paring everything down into these limitations. It's a nice combo, a nice switch-off between the two."

Ghosts Go Blind, released April 30 on local imprint Western Vinyl, represents a number of different directions for Ola Podrida. Having set aside time between films last year, Wingo retreated to a friend's house in Estes Park, Colo., and had most of the songs for the album written within a week.

That Ghosts was composed specifically for a full band has cemented the quartet of Colin Swietek, Matt Clark, and David Hobizal. The group lends the album a cohesive electric surge in arrangements that expand upon Wingo's sleepy, lugubrious drawl with more power and eclectic shades.

"I never set out to be this home-recording, folk guy by any means," laughs Wingo. "The first record came out that way because that's what I felt like doing and I didn't have a band. I wanted to write some stuff specifically for this lineup and play to its strengths."

With Ghosts, Ola Podrida feels for the first time like a collaborative band effort, carrying a unique sense of urgency to take advantage of the moment. At the same time, the album hinges lyrically on the present, capturing the songwriter as he enters his late 30s, especially on songs like "Not Ready to Stop," "Staying In," and "Some Sweet Relief."

Not that Wingo shows any intention of slowing down. If anything, Ghosts emphasizes that even amid Wingo's notoriety in film, Ola Podrida rises on its own terms as an individual project capable of its own creative and successful trajectory.

"I'm really happy we're able to go out and support the album," says Wingo. "We didn't get to do that with the first two records, and that wasn't just because of film, but also just me not being the best band manager. So I'm really, really happy we were able to put this out and be dialed in with each other."

Meanwhile, Wingo's next film score is slated for release this summer with Green's upcoming Prince Avalanche, and he will be touring on bass with co-collaborators Explosions in the Sky later this year.

"Where I am now is fine. It feels good," he says, nodding in reinforcement. "Anything else is gravy. I get to work on films that I believe in for a living, and I have the time to still work on my own stuff. I want to figure out a way that I can still feel I'm giving both proper due, but obviously if it becomes a problem to do, then that's a good problem to have." 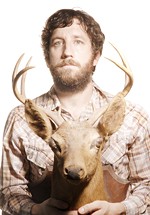 Drawing Focus
Ola Podrida stirs in the 'Belly of the Lion' 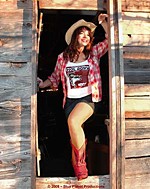