Another Red River venue going away? There goes the neighborhood.

For all the legends who've played the Erwin Center, some are better left forgotten, like Rick Ross, November 2012. (Photo by Sandy Carson)

As it now looks, one of Red River's staple venues will be torn down.

No, it's not Beerland, Mohawk, or the club formerly known as Headhunters. It's a building with a longer musical history than those three put together: the Frank Erwin Center.

Last week, the UT Board of Regents approved the development of the Dell Medical School on the southeast section of campus. University spokesman Robert Cullick confirmed to the Chronicle's Richard Whittaker that the university has plans to demolish the Erwin Center, but dismissed the previously held notion that it was to make way for med school buildings.

"That stuff is beyond the Dell Medical School piece," he explained. "That is the overall, and what I mean by that is that you can build any education and research buildings, you can build a medical office building and a parking garage – that's what we consider everything for this plan to move forward – and you can do all that without moving the Erwin Center."

Cullick says UT's master plan shows the Erwin Center going away at some point, but stressed, "You don't have to do it in order to build what we told the public we need for a medical school."

According to him, the building, which opened in 1977, is likely a candidate for demolition because it requires $40 million in rehab and remains ill-equipped for large productions because it contains only one loading dock.

"When they built it so many years ago, nobody was thinking about the kind of shows they have these days," he says.

The practical impact of limited loading docks seems negligible from a consumer standpoint in the face of one of the venue's best years in recent memory, with concerts including Eric Clapton, Rush, Bon Jovi, and – coming up – Paul McCartney, Taylor Swift, Bruno Mars, and Black Sabbath.

Regardless, the Erwin Center's days are numbered, but exactly what that number is remains unclear because the area will be developed in phases. Cullick estimated it may be as many as 10 to 15 years.

Until that day comes, few will stop to consider the convenience of the arena. In the scope of concert halls that can easily seat twice the population of Bastrop, the FEC has a lot of upsides: it's Downtown, you can park on the street or access it by public transportation, the views are decent, and it sounds good.

Hosting concerts since 1978 when Lawrence Welk popped its cherry, the Erwin Center stands alongside Antone's, the Broken Spoke, Cactus Cafe, Continental Club, and the Victory Grill as one of the oldest places to hear music in Austin, and, with a maximum capacity of 17,829, it's the city's largest venue.

The fact that the Frank Erwin Center also houses basketball games guarantees UT will build another indoor arena, but if the sound sucks or it's hard to access, we'll all realize we didn't know what we had 'til it was gone.

"Applaud if you've heard of Lance Armstrong," producer Kamal Soliman polled to a loud roar. "Well, in light of recent events, he's actually here to play some drums with us."

Of all the local bands to sit in with, Lance Armstrong chose the one that's spun his name into a stoner reference. Soliman, a longtime acquaintance of Armstrong through management, recalls the genesis of the collaboration: When the cyclist caught a glimpse of a Lance Herbstrong T-shirt a few years ago, he tweeted it out to a couple million followers.

"He was all about it," Soliman confirms. "And I always hoped someday we'd come together to do something, but until recently it just never came to pass."

Then last month, Armstrong initiated a jam with Lance Herbstrong at a Mellow Johnny's party in front of a small crowd. He had so much fun that Soliman invited him to sit in at Reggae Fest. The novice drummer rehearsed all week, invited the band over to practice, and then got up and nailed his four-song section at the festival.

"You've got to give it to the guy," commended Soliman. "He's courageous to put himself out there like that. Reggae Fest was one of his first big public things he's done since the fallout, and seeing how happy it made him and his family made us feel really good."

Considering he joined the band for another gig at Holy Mountain two weeks later and plans to perform at Lollapalooza where Herbstrong plays between Queens of the Stone Age and Nine Inch Nails, it appears as though Armstrong enjoys the collaboration just as much.

"It was meant to be," Soliman points out.

Not because of the similar names, but because guitarist DiStefano also lost one ball from a bout with testicular cancer.

"That," laughs Soliman, "is an amazing coincidence that can't be ignored!"

› Though it hasn't yet been taken off the Stubb's schedule, don't expect As I Lay Dying to open for Killswitch Engage on May 31. The band's singer, Tim Lambesis, was arrested earlier this month for allegedly hiring an undercover cop to kill his wife, and he remains in California awaiting trial.

› Psychedelic dream-pop band Black Books heads overseas this weekend to embark on a UK tour, including two shows as main support for the Flaming Lips in London. The locals, whose new full-length was just released in England, play a send-off show on Friday at the Scottish Rite Theater.

› Mike Judge was at the Sahara Lounge on Tuesday directing a video for local trio Dupree, which is fronted by his friend Mike Flanigin on the B3 organ. Assisting in the shoot was another local guy, radio host Alex Jones, who kindly lent his cameras and production crew. The video is for the song "The Turtle" off Dupree's Nuestro Camino debut, which gets released on CD this Saturday at the Continental Club Gallery, 10:30pm.

City, UT Agree to Change Red River’s Flow
One of Central Austin's main thoroughfares to be realigned and reconstructed 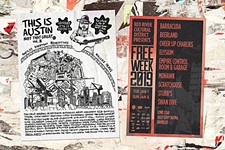 Faster Than Sound: A Tale of Two Red River Fests
Free Week and This Is Austin, Not That Great share Red River