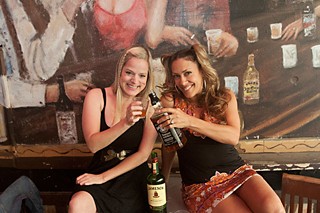 Let's take a look at the results of March's Austin Music Awards, shall we? How many times are the Whiskey Sisters or a member of the duo's band mentioned?

First, they were named Best New Band. Then, "All I Can Do," from their self-titled 2013 debut, came in at No. 3 in the Song of the Year category. They're No. 2 Best Country/Bluegrass Band; No. 2 Best Rock Band; and No. 3 Best Roots Rock Band. They split in Best Female Vocals with Teal Collins at No. 2 and Barbara Nesbitt slotting in at No. 4, as well as No. 3 Best Songwriter. Bass player Lonnie Trevino Jr. squeaked in at No. 9 in his category.

That's quite the showing for an act that barely existed when last year's AMAs were handed out. Must have been some serious ballot box stuffing.

"We had sex with the panel," quips Nesbitt.

Collins laughs. "We obviously have lots of fans here in Austin," she nods. "Barbara and I have been paying our dues for a long time on separate projects, so we tapped everybody. We weren't really persistent, but people did it. Still, it's a little puzzling to me, too."

"We put our heart and soul and a lot of energy into this band," adds Nesbitt. "Both on the stage and behind the scenes. Maybe people are picking up on that and appreciating it. I can't guess what's in anyone else's mind. I'm just grateful."

As Best New Band, these Sisters bring a lot of experience to the party.

With her husband, guitarist Josh Zee – and at the suggestion of Asleep at the Wheel's Ray Benson – Collins moved their band the Mother Truckers here from Northern California in 2005. The quartet released three stomping country-rock LPs before the couple decided to take a hiatus from the band two years ago. No personal problems – they remain happily married. It was simply a case of "let's see what else we can do." He hooked up with friends from Stonehoney and Deadman and formed the more blues- and soul-influenced South Austin Moonlighters.

Early in 2012, Collins, the daughter of famed radio disc jockey Al "Jazzbeaux" Collins (briefly NBC's Tonight Show host in 1957), sought something of her own when fellow California transplant Nick Randolph of Stonehoney suggested she try singing with Nesbitt.

Out of San Diego, Nesbitt had some success as a singer-songwriter while also being a member of Tim Flannery & the Lunatic Fringe. Flannery, once popular infielder for baseball's San Diego Padres and current third base coach for the San Francisco Giants, only works in the off-season, which allowed Nesbitt some freedom. She chose Austin in 2010.

"Tim plays a lot of great gigs with a lot of great musicians and I get to be a part of that," she says. "I still do that when I can. But I wanted to live in a city that gives a shit about music."

And yet she moved here and then proceeded to tour outside the country for two years. "So I still felt like a newbie when I came back," she adds.

The Whiskey Sisters' first real gig happened around South by Southwest 2012. Later, the lineup solidified around three-quarters of the Moonlighters. That's Trevino on bass, Zee on guitar, Phil Bass on drums, and Michael Davids on keys.

"Lonnie brought Michael into the band," chuckles Nesbitt. "They knew each other from church, so they're good boys."

Zee wasn't the group's original guitarist, but according to Collins, he's more than happy playing the sideman while she and Nesbitt wail their hearts out up front.

"He wanted me to be the singer in the Mother Truckers," says Collins. "He didn't want to sing, but I disagreed with that because I love what he does. He's very happy now. He'd like not to have a microphone in front of him."

The sextet's live performances began with a 50/50 mix of covers and originals. Even some of the covers, Motörhead's "Ace of Spades" and the Rolling Stones' "Loving Cup" for instance, sound like band originals when reimagined as inflamed country rockers sung by super confident women. Once Nesbitt and Collins began writing together, the Sisters' 12-song debut began taking shape. The one with a song's original idea sings it, but there's a uniformity of sound that was there from the beginning.

"When we sing harmony and you can't tell who's singing what, I love that part," says Nesbitt. "We knew immediately this was something special. We hoped that it would be special to other people, but we certainly didn't expect it."

Approaching their fan base for help when it came time to cut the disc, the group eventually chose to do it on their own instead of using popular online fundraising tools like Kickstarter.

"Last summer, we did what we called the Whiskeystarter campaign," explains Collins. "Which wasn't something many bands did at the time. We had our own page instead going to Kickstarter. We borrowed their format but made it so we didn't have to reach our goal in order to use the funds. We didn't want to get burned."

"And we could use the money as we got it," says Nesbitt. "People were giving us money even after we finished the record. Some awesome people are still kicking in and we're using that for touring and promotion!"

The self-titled disc finds the entire endeavor living up to Best New Band. Collins commanded such force in the Mother Truckers that The Whiskey Sisters sounds like a natural sonic extension as doubled exponentially by Nesbitt. That's especially true with the addition of Zee's slide guitar work on "Wait a Lifetime" and his rampage riffing on "The Whiskey Song." Among the album's dozen songs, "Home on the Highway" best embodies what the band can to do: hellacious vocal harmonies, Zee's strutting six-string, and Davis' piano plinking á la Leon Russell in all the right spots. It's Southern rock with a decidedly feminine twist, more Heart than Skynyrd, but no less stirring.

"Josh was the unsung hero on the record," points out Collins. "He should've taken a producer's cut but he didn't want one."

Besides the Sisters' always-packed Thursday happy hour at the Continental Club, they're branching out with upcoming shows at Threadgill's, Antone's, and Strange Brew. There's a date in Zilker Park for KGSR's Blues on the Green in June, and this summer the group's also booked for festivals in Northern California – the new Bottle Rock Festival as well as High Sierra – plus the Ride in Telluride.

"Teal said this recently," offers Nesbitt. "And it's perfect: 'Get on board, man.'"

"To me, it feels as comfortable as music can be," Collins agrees, "People have come up to me and said, 'It's interesting to see you put on this hat with this band,' but really I'm just doing what I do, what I always did."

Given that the Whiskey Sisters are unafraid to let rock candidly expose the tenderest soul, she means they sing and play and mean it. With a couple of shots of whiskey on the side.