Making a new album was no easy fight for the Boxing Lesson.

"An album's title can seal its fate," points out Paul Waclawsky, guitar-shredding frontman for the local psychedelic synth-rock trio. When he and keyboardist Jaylinn Davidson began writing the band's second LP four punishing years ago, they planned to name it Possibilities. Only after enduring a long and merciless beatdown of bad luck and creative interruptions did they come to curse that title.

Reduced to a duo after their drummer caught a federal sentence for growing weed, TBL began penning Possibilities in early 2009 using programmed beats. They demoed in a few studios before turning the ear of Chris "Frenchie" Smith, who signed on as producer. The best part about recording at his studio, the Bubble, was the price; an acquaintance of the band, so enthusiastic about the project, offered to pay for the session in full. The recordings turned out great, but when it came time to pay, the financier disappeared and left a recently unemployed Waclawsky to foot the bill.

Paying that studio debt became more daunting when a violent car accident ripped Waclawsky's shoulder in three places, requiring surgery and home rehab. He wrote the rest of the album "in a major transcendent haze," an artsy way of saying he was sloshed out on pain pills for a year or two.

"Yeah, looking back, I was wasted that whole time," he laughs. "But I wrote some really great pop songs."

Back in the studio, the Boxing Lesson's temporary drummer and full-time manager cracked and got simultaneously terminated from both positions, leaving the recordings unusable. Under Frenchie's guidance, they pulled the rare move of re-recording new drums over the existing tracks, expertly completed by interim percussionist Matt Bongirno.

Then, last July, when Murphy's law should have expired and allowed TBL to finally finish their album, a disgruntled studio engineer hijacked the hard drives containing the recordings. Waclawsky spent desperate weeks politely trying to recover the drives to no avail.

"Then I fucking lost my mind one morning," the mild-mannered Waclawsky remembers.

He went to work and fired off an email: "Good morning asshole. This has gone too far. You trashed $1,000s of my property. There will be repercussions. Somehow, someway, I will have sweet revenge. I'm fucking crazy. You don't even know the extent."

The engineer responded immediately, begging that Waclawsky not come to his house.

Stepping into an empty conference room, Waclawsky roared, "I'm going to paint my face like Rambo, strap on black armbands, and track you down to get my damn drives back!"

Recalling it, he laughs. "I threatened his life! It was very convincing."

The engineer returned the hard drives an hour later. Rambo had saved the day, again.

Later, while on tour, Davidson turned to Waclawsky and said, "I'm sick of Possibilities. This album is never getting done. No more calling it Possibilities." Utilizing a clever triple entendre, they renamed it Big Hits! and emerged with a 12th round knockout.

With distribution through their loyal cornerman's label, Frenchie Smith Records, the power trio now celebrates the long overdue release with a show at Mohawk, Thursday, May 16.

The Austin City Limits Music Festival unveiled its fall lineup on Tuesday, starring South by Southwest headliners Depeche Mode and, the Beatles to the UK synth thugs' Rolling Stones, the Cure. Also on the top tier comes Muse, Kings of Leon, Atoms for Peace, Lionel Richie, Phoenix, and Wilco. Other notables include Queens of the Stone Age, D'Angelo, Fidlar, the Jon Spencer Blues Explosion, Kendrick Lamar, and Shuggie Otis. ACL goes down at Zilker Park Oct. 4-6, then reruns Oct. 11-13. "Playback" congratulates the hometown acts making this year's list. ACL remains the best fest to score a gig at because the crowd actually shows up early enough to see the locals, it guarantees them two shows, and I'm pretty sure you get a free meal backstage. Here they are: Bobby Jealousy, Whiskey Shivers, Not in the Face, the Black Angels, Dana Falconberry, Shakey Graves, True Believers, Sons of Fathers, Okkervil River, Max Frost, Band of Heathens, Shinyribs, White Denim, next week's Chronicle Paper Cuts guests the Peterson Brothers Band, My Jerusalem, the Preservation, Grace London, Asleep at the Wheel, the Bright Light Social Hour, and Court Yard Hounds. 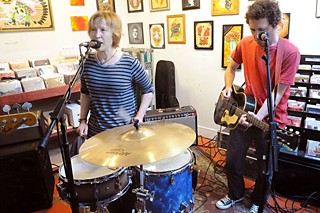 Ira Kaplan flipped through a bin of 7-inch singles in the corner of End of an Ear last Friday as the South First record shop filled up with over 100 fans eager to see Yo La Tengo play an intimate appetizer to that night's sold-out show at Mohawk. "This is the place to be if you're looking to fill up your Deep Purple vinyl collection," he pitched. Playing semi-acoustic, Hoboken's veteran indie trio fulfilled audience requests, including drummer Georgia Hubley's tranquilizing "Tears Are in Your Eyes" and "Periodically Double or Triple," to which Kaplan clarified that the line "I never wear my helmet when I'm riding my bike" was a matter of artistic license by showing off his own cycling headwear. Two nonrequests capped off the perfectly personal, loose, and lighthearted in-store: the recent "Is That Enough" and Roky Erickson's "You're Gonna Miss Me."

Last week saw the City announcing plans to renovate Auditorium Shores in order to make it less dusty and crusty. Prompted by a $3.5 million donation by promotions giant C3, which produces the Austin City Limits Music Festival in Zilker Park, the remodel will temporarily displace South by Southwest, Fun Fun Fun Fest, the Urban Music Festival, and Austin Reggae Fest. "You've seen all the Fun Fun Fun photos from the last few years, with everyone wearing dust masks and bandanas," relates festival co-founder James Moody. "We don't want that. We want a nice park and we believe in parks investment, but we feel like there are ways where you're not displacing good residents." Fun Fun Fun remains an eight-year dweller of Austin parks, first at Waterloo, now at Auditorium Shores. City officials confirmed this week that November's Fun Fun Fun 8 will be the last major event at Auditorium Shores before construction begins, reportedly running February 2014 to February 2015. Moody would like to see construction completed before next year's FFFF, but if it isn't, he's looking at alternative venues, which will certainly come at a higher production expense to his promotions company, Transmission Events. Moody wouldn't acknowledge any ulterior motives at play on the part of rival C3, but the conflict of interest in the latter's donation displacing their direct competition has already raised objections in the local music community. "Let's use that investment and make renovations with the least amount of impact possible," says Moody. He wasn't the only one troubled by losing the space next year. "Auditorium Shores free shows are extremely important to South by Southwest and the community," reasoned SXSW Music GM James Minor. "We are reluctant to give up the park for a year, but agree that the work needs to be done." At this point, Minor's not certain whether SXSW will have to cancel its free outdoor concerts or find an alternate location for next year. 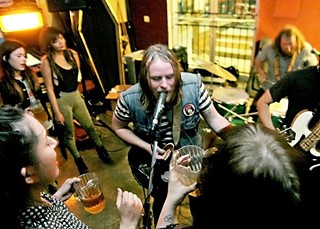 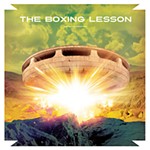 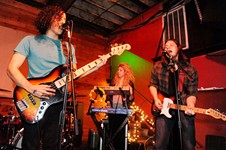 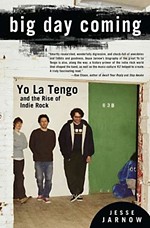 Big Day Coming: Yo La Tengo and the Rise of Indie Rock
All things indie through a Hoboken love story