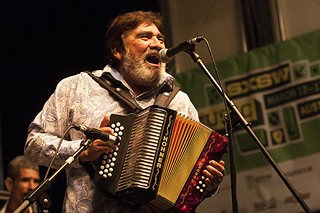 More than 30 years ago, Celso Piña introduced cumbia into Mexico and established his native Monterrey as the seat of the genre. In this millennium, the accordionist then revolutionized the popular Afro-Latin dance music and its cousin vallenato when he collaborated with acts like Mexican electro-rockers Cafe Tacuba to produce otherworldly fusions. "El Rebelde del Acordeón" remains in demand everywhere.

Much has changed over those decades. Piña's made his mark on Europe, the U.S., and South America, but he can hardly play his hometown. After a stopover at South by Southwest (see "SXSW Live Shots," March 18), he returns to Austin for Pachanga Fest. We spoke Spanish with the cumbia pioneer by phone to Monterrey. – Priscila Mosqueda

Austin Chronicle: You were just here for South by Southwest. How was that experience?

Celso Piña: It was really cool. There were a lot of bands and people were really psyched. Then we played and people were equally psyched, so we hope Pachanga will be the same. I think by this point most people know my music, and I've never played with Los Lobos before and Grupo Fantasma will be there, too, so I think it will be a good party. There's going to be a lot of variety: ska, rock & roll, cumbia, vallenato. I think it will be a good pachangón, this Pachanga Fest.

AC: Pachanga tried getting you to Austin before last year, correct?

CP: Yes, but unfortunately – or fortunately – we were in Europe touring for about two months so we couldn't make it. Now we have the opportunity to be here, and it's not a long trip from Monterrey.

AC: Now that you're playing international music festivals are you reaching different audiences?

CP: I think we're largely reaching Mexican audiences, because as you know there are a lot of Mexicans in Texas. When I was in Austin [at SXSW] there were people from all over [Latin] America – Cubans, Colombians, Venezuelans, Puerto Ricans, Salvadorans – so I think it reaches a lot of people from all over.

AC: You're from the La Campana neighborhood in Monterrey. With the violence in your home state are you still able to visit or have you stopped going?

CP: No, no, of course [I go]. When la raza asks me, "Why don't you play here anymore?" I tell them I don't play for a simple reason: No one's booking me. Why? Because there are no more venues. There aren't music venues in Monterrey like there were 10 or 15 years ago. You could play in [the suburbs of Monterrey] and in Monterrey; there were dance halls and bars everywhere, and there's none of that now. People ask me, "Are you not playing anymore, don't you want to?" And I say, "Of course, but would you have us play on the street?"

AC: Has cumbia's popularity waned there?

CP: No, it's still a very popular rhythm that lives all over Monterrey. The problem is the security issues we're facing now. There are no more places to play. So that's what's killing our concerts, and we hope that situation will improve soon. I hope that firstly God, then our leaders – the people at the top, the ones who can do something – will improve this soon so we can return to normalcy.

AC: Have you been able to play in other Mexican cities where there's less mayhem?

CP: Yes, of course. When we can't play Monterrey, we go elsewhere. You have to make a living; you still have to pay the bills. Sometimes you have to travel further to play. You can't give up just because it gets hard.

AC: It seems like it's also opened the door for you to go other places.

CP: Yeah, right now they're putting together a South American tour so hopefully that will pan out. The same people who took us to Europe are going to put on South America, beginning with Argentina, Brazil, Colombia, Venezuela, Peru, Guatemala, and so on. I hope it happens so we can take our music to all those places.

AC: How was finally getting to Colombia?

CP: It was great, because their cumbia is very refined. It's very fine; it's slow and deliberate, and obviously I'm not going to go there and teach them how to play a cumbia because that's where it originated. But we have another cumbia, a cumbia made by regiomontanos [people from Monterrey], by Mexicans, that has another saborcito. It's that regio flavor, that Mexican flavor, and we throw some other things in there like an electric guitar with distortion and drums. It's a bit heavier. It's a bit more forceful and rough. It's like a "heavy cumbia."

AC: Your music evolves with each album. Over the length and breadth of your career, what's been the most significant change in your sound?

CP: I think it started when I began to accept invitations from different musicians, composers, and arrangers to do "fusions." So about 12 years ago, I started fusing my style with other rhythms. I started using other singers and artists and so on, and I think that was a big shift in my style and people embraced it really quickly. I think if [2001's] Barrio Bravo hadn't been as successful as it was, I probably wouldn't have continued with the fusions. Now, la gente ask for it and want to see other artists on upcoming albums.

AC: You have a voice that molds to other genres really well.

CP: When you do something you love, you do it well, but you also have to put in the extra effort. I liked doing the fusions. For example with Cafe Tacuba, "Aunque No Sea Conmigo" doesn't have the traditional cumbia instruments. It's more bohemian. It's less lively, more of a bolero, but ever since we started recording it I loved it. I loved the sound, the mood, the cadence, and then I started putting in a little extra. I think that's what people like.

AC: So this next album will feature some fusion?

CP: Yes, la gente, la raza are asking for it. Like we were at Vive Latino, the big music festival here in Mexico. And I was approached by some guys from different places – Guatemala, Colombia – and they said, "Hey maestro, what about the next album, we should do something?" How do you say no? They're my brothers. So yeah, let's do it!