The musical head trip known as Austin Psych Fest finds a new home Friday through Sunday: Carson Creek Ranch, a sweet piece of river-fed farmland in East Austin that's virgin to hosting festivals. A new location in itself represents nothing new since APF has moved six times in its six-year existence, but the natural scenery and camping bolsters the overall experience of the fest. For a genre of music in which vibes are paramount, Hill Country camping definitely trumps last year's location in the concrete shopping centers of East Riverside.

"If you'd have told me when we first started this festival that these guys would be on our lineup, I would have called bullshit," glows Black Angels' singer Alex Maas, a member of the mysterious Reverberation Appreciation Society, which founded APF in 2008. "To me it's almost a cultural experience – a meeting of the psychedelic music-loving minds, new and old."

The Angels' newly released fourth album, Indigo Meadow (see "Texas Platters," April 5), stands out for its lightening up on the obligatory vocal reverb that characterizes the locals' neo-psychedelic sound.

"It was hard to lose the reverb," admits Maas. "But I realized I could toy with my voice inflection more and be just as psychedelic and even more creepy because you can hear the human soul."

Don't expect a complete departure from the echo chamber.

"I still love reverb," Maas promises. "My last words will be in reverb."

Examining names on the local psych band roster – the Black Angels, Holy Wave, Hidden Ritual, the Saint James Society – I notice they all use religious parlance, which reminds me of something Maas told me last month: "What's most important about music is what it does for people. It's almost as if it's the most current, tangible form of religion." When I followed up, so did he.

"That's what we want when we're making music – to have a spiritual experience. But replace 'religion' with 'spirituality.' There's too much corruption in religion."

"I think we're part of something bigger than us," concedes Holy Wave guitarist Ryan Fuson.

The local quintet of multi-instrumentalists, who suck audiences into a washed-out current of echoing three-chord rock & roll while beaming in liquid light projections, have emerged as an Austin Psych Fest flagship band, counting three straight APF appearances and a compilation LP called Evil Hits out on the Reverberation Appreciation Society label.

"Just being affiliated with the Reverberation Appreciation Society, we get people buying our album from Greece, Italy, England, and a shit-ton of people from France," reveals bassist Dustin Zozaya. "There's a big group keeping an eye on that label."

"They're keeping an eye on Austin, too," adds drummer Julian Ruiz. "This is the hub, in America, for cutting-edge psychedelic music." 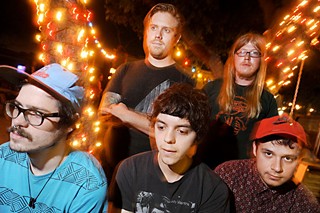 On the eve of their national tour with Sweden's masked Afrobeat freakout Goat, which has generated a media buzz and sell-out crowds, Holy Wave sat at a picnic table behind Hotel Vegas and indulged me in an accidental debate about the term "psychedelic."

"Psychedelia is mind transformation – when your music makes someone feel different than they would at that moment," outlines multi-instrumentalist Joey Cook.

"But also it has an element of madness to it," adds vocalist/guitarist Kyle Hager. "I think of Pink Floyd's Syd Barrett because he totally went all the way. The most psychedelic thing you can do is walk 20 miles home to live in your mom's house after you quit a band."

Outraged, Fuson nearly spits out his gulp of beer: "That's not psychedelic, man!"

"It totally is," Hager replies.

The group then begins evaluating the genre's history. The end of the Beatles' Abbey Road, very psychedelic. The Grateful Dead, folk-influenced. Most everyone present agrees that early dub music was very psychedelic for its atmospheric focus and use of tape echo. Drugs – they're only tangentially connected to a psychedelic experience. Then Fuson adds a prime example.

"Bob Dylan getting a band – that was incredibly psychedelic," he posits. "That changed the way people thought about music."

Hager, playing devil's advocate, points out the relativity of the grading.

"Girls get in their car and they put on a Justin Bieber CD and they're transformed by his music."

"No, Kyle!" Fuson objects. "I draw the line right there. There's no single definition for 'psychedelic,' but there are parameters, and it's not Justin Bieber."

Zozoya returns from the bar with a drink.

"Are you still talking about the term 'psychedelic'?" he asks. "That's fucking ridiculous."

› Outlaw, activist, iconoclast, cultural icon ... on Tuesday, Willie Nelson adds octogenarian to his long list of distinctions as he celebrates his 80th birthday. Fans, including Snoop Lion, Carlos Santana, Rob Halford, Neil Young, and Howard Stern have already logged video birthday greetings online for the country legend. You can, too at www.happybirthdaywillie.org, then check back on April 30 for a montage. When Nelson was born in 1933, alcohol prohibition was about to end, Adolf Hitler was in power, and you could buy a new car for $500. Nelson plays the Backyard in Bee Caves on Sunday, with all the proceeds going to the volunteer fire department in West, Texas, just a song south of his birthplace of Abbott.

› A representative at Red Light Management, the world's largest indie management company, confirmed it's working with two Austin acts: one-man-band Shakey Graves and tween noise rock trio Residual Kid. Bart Dahl caught the latter during South by Southwest and described their performance as "stellar and pure," adding, "They're really good now, but they're going to be great." According to Billboard magazine's "Power 100," Red Light owner Coran Capshaw has long held a stake in local promotions company C3. In other contract news, local favorite Kat Edmonson has signed to Sony Masterworks. The singer's Kickstarter campaign funded last year's Way Down Low, which will now be distributed worldwide on the label's OKeh/Masterworks imprint. Earlier this month, respected indie label Compass Records announced the signing of Austin's Darden Smith. The critically acclaimed singer-songwriter's debut for the label, Love Calling, is slated for an August release.

› After years of living without health care, this procrastinating local musician finally got off his ass and called the Health Alliance for Austin Musicians. All it took was scheduling an appointment, filling out a single-page form, and bringing in proof of my musicianship. HAAM's director of services, Jennifer Stowe, dutifully photocopied my band's 7-inch record, which features Cunto! drummer Chris Hall riding a buffalo naked, without laughter and now I have low-cost insurance covering health, dental, vision, mental health, and hearing. HAAM gets significant support from fundraising events like this Friday's Corporate Battle of the Bands at Antone's, which features white-collar workers slamming it out onstage as part-time rock stars. Celebrity judges Ian McLagan, Kathy Valentine, and Quita Culpepper pick the best. Local R&B crew Soul Track Mind supply the afterparty. Come and show your support for one of Austin's unique brags. 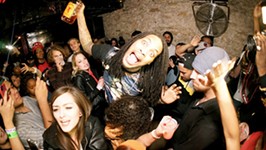