When Japanese guitar samurais Ghost scared up folk-inflected lightning psych at Mohawk in 2009, the 30-year-old institution conjured an indoor electrical storm. Now, group constant Masaki Batoh strives to apply a similar electro therapy directly. Brain Pulse Music – according to the CD sticker – ties into Batoh's "patent [for] a machine that derives sound waves from the pulsing of the brain." Indeed, from drill-bit exercises ("Eye Tracking Test") to bells, bowls, and Buddhist gongs, the otherworldly Drag City LP feels like it's tickling the gray matter and grooves between your earbuds. "His machine has the potential to change brains by stabilizing the central nervous system." We emailed Kyoto's mad scientist for further clarification.

"BPM was originally invented by me in order to provide [relief for] developmental disorder patients [with], for example, ADD, Asperger syndrome, epilepsy, and some autistics," he writes in, at times, broken English. "They used to have strong impulse in their brain waves in case of panic. They surely had omens in advance, but they could not avoid it. This never happened for ordinary people. [Now], while they enjoy BPM sound or BPM game (connected to game machine), their brain wave is calm around 8 [hertz]. But if they have panic mode, it stops at once. They want to keep BPM running, so they learn how to maintain BPM naturally." 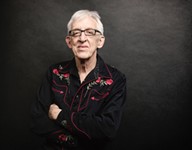