On the Bus Again

A visit with Willie Nelson on the eve of 80 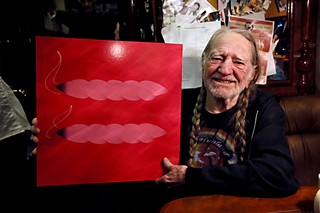 ACL Live at the Moody Theater crams to the rafters with generations of revelers, including University of Texas Longhorns (footballer Earl Campbell, now using a walker), dignitaries (Attorney General Greg Abbott), and all manner of tony individuals. Lots of well-groomed heads bob, the hair almost without fail blonde and of impressive height in the feminine class.

They're here raising money for the Darrell K Royal Research Fund for Alzheimer's Disease, dining on what from the mezzanine appears to be prime rib, and waiting on the evening's musical entertainment. The event comes titled as "Ben Willie Darrell Present the 4th & Goal Gala." Austin golf great Ben Crenshaw and late football legend Darrell Royal sandwich that marquee's middle-name headliner, who's likely much of the reason $1 million will be raised here this evening. Everyone knows Willie Nelson and Coach Royal were close friends.

When I last encountered Willie Nelson for this paper (see "Twisted Williemania," Feb. 9, 1996), it was a transitional time in the local country singer's career. He was past his IRS troubles from earlier in the decade, but declining record sales prompted Columbia Records – his label since 1975's Red Headed Stranger LP – to release him. Never mind that he was still packing houses live. We sat aboard that era's iteration of the famed Honeysuckle Rose, his tour bus, and watched a Beatlemania-like scene unfold outside Buffalo Billiards on Sixth Street. We wondered aloud if Columbia's bean counters had been to a show and seen what we were witnessing.

"Which is Columbia in a roundabout way," notes the singer on the 2013 edition of the Honeysuckle Rose.

"I think they finally bought a ticket," he laughs heartily across the kitchen table from me. "You'd think they'd catch a show every now and then!"

After his Moody performance, Willie's wife Annie has arranged with the DKR PR to bring myself and a reporter from CBS News backstage. Walked onto the bus by the couple themselves, we're welcomed into a clean, well-lit, and homey vehicle that runs on bio-diesel. Unlike in 1996, Bruce Springsteen isn't walking out and greeting me as I climb aboard.

In fact, there are no hangers-on for Willie to shush as we talk, just longtime drummer/best friend Paul English (the subject of Willie's "Me and Paul") and pianist sister Bobbie Nelson (revisit "Sister Bobbie," Jan. 18, 2008). The air definitely smells herbal, but not smoky – it could be air freshener for all we know. Willie still drinks strong post-show coffee, a silver laptop half-closed on the table between us.

The show itself differs from 1996, as well. Willie Nelson & Family constituted a sprawling outfit back then, with two drummers and as many guitar players, not counting Willie himself. They were loud, raucous, and powerful, bordering on a rock & roll version of Texan honky-tonk, taking in elements of blues and jazz. In 2013, Nashville guitar great Grady Martin and guitarist Jody Payne are gone, deceased and retired, respectively. And English's full kit now strips down to a snare and brushes, with younger brother Billy on percussion. It's a smaller band.

"It might be," nods Willie. "We had a real tall guitar player out there, though. He makes it look like there might be more of us!"

"Nah," snorts Ray Benson when asked if he's joined the Family. "I had a night off [from Asleep at the Wheel], so I sat in. It's easy – Willie plays all the leads."

Willie's son Lukas sometimes mans the electric guitar for his dad, while on bass, local rockabilly thumper Kevin Smith of High Noon fame got called in "about a year-and-a-half ago" by his own account – after the passing of longtime Family bassist Bee Spears. Still in the Family: Paul English, Bobbie Nelson, and Mickey Raphael's idiosyncratic harmonica.

Raphael can thank the evening's honoree for his intro to Willie. Darrell Royal's widow, Edith, notes early in the evening at the Moody that an ASCAP executive introduced the Royals to a young Raphael prior to one of the frequent "pickin' parties" the football giant hosted for musicians he admired.

Edith Royal: "He said, 'I've got this harmonica player from over in Oak Cliff, and he's about 15 years old. He's just great. Can I bring him over? I want Willie to hear him play.'

"So [Raphael] brought his harmonica over – he was just a kid! [Willie] hired him right then. Been with Willie ever since. I said, 'Mickey, I'll introduce you to Willie if you'll promise me you'll never take up any of his bad habits.' He said, 'I promise.' I said, 'Now, you can try some of them, if you want to. But don't take up any of them!'

"He's a pretty neat kid. He checks in with me nearly every time they're in town. And boy, he's added to that band!"

Indeed. Mickey Raphael's harp is as much Willie's sonic signature as Willie's own singing or guitar work.

With a tighter-knit group and a scaled-down presentation, Willie Nelson & Family 2013 are more dynamic, differing from the old power-blast. Bobbie Nelson appears to not miss it.

"We've lost some of our musicians, of course," she says. "And there's some music that doesn't really require a lot. If you play freer with musicians, you don't need a lot of extra things. You can get some feeling, if that's what you're looking for."

She pauses, then smiles over her post-show glass of red wine. "We just love to play."

Play they do, across a set sometimes familiar, sometimes not. Tonight might be the first time anyone's heard Willie & Family not kick off with their famed boogie through Johnny Bush's "Whiskey River." It's second in tonight's set, a gateway into familiar medleys of early-Nashville song-mill hits ("Night Life," "Crazy," "Funny How Time Slips Away"), the Seventies heyday ("Good Hearted Woman," "Mammas Don't Let Your Babies Grow Up to Be Cowboys," "Blue Eyes Crying in the Rain"), and more recent triumphs ("Beer for My Horses," his hit duet with Toby Keith recast as an audience sing-along). Then it's an easy ride into some Hank Williams standards and a rousing, get-on-your-feet-and-clap gospel finish, with an appearance from daughter Amy. At 90 minutes, it's compact, efficient, and typically satisfying.

The Family, save for Mickey Raphael, doesn't play on last year's acclaimed Heroes, the latest in a list of duet albums lengthy enough for a separate discography. Singing partners included Merle Haggard, Snoop Dogg, Kris Kristofferson, Sheryl Crow, Ray Price, Billy Joe Shaver, and several tracks with son Lukas. What makes Heroes unique among Willie's duet collections is that it's the first set of (mostly) Willie Nelson originals in a good long while.

"Probably," he acknowledges. "We do a lot of covers."

Let's say you do interpretations.

Willie laughs. "Well, I do my version of things."

You're in a league with Sinatra – your interpretations brand a song uniquely.

"I just like singing the good songs. Whether they're country or pop, it don't matter. If I know it, I'd like to sing it."

Which explains the latest disc, this time featuring the Family. Let's Face the Music and Dance, a set of dance hall standards, ranges from Irving Berlin (the title track) to Spade Cooley ("Shame on You") and seminal Willie influence Django Reinhardt ("Nuages"). There's even a romp through Carl Perkins' rockabilly classic "Matchbox." Previously, Willie had a hit duet with Leon Russell on Elvis Presley's "Heartbreak Hotel."

"Elvis and Carl?" repeats Willie. "All them guys out of Memphis that came through [Sun Records] and kicked up a lot of dust for awhile? Yeah, I was paying attention. Carl Perkins – I liked 'Matchbox'! He and I recorded down in my studio one time. He was a good artist."

You've always had a little boogie in what you're doing.

"Sister Bobbie and I grew up playing boogie woogie and gospel and all those together. It's a combination of a lot of different kinds of music."

That combination has served Willie Hugh Nelson well since his first professional gigs as a 10-year-old guitarist in John Rejcek's band, playing Czech dances in his native Abbott. That was 1943. Seventy years later, Willie and Bobbie and Family make a lot more than the $6 take-home he enjoyed then. In an 80th year crammed with commemorative projects and events, Willie Nelson's not looking at his watch.

"We're still playin' pretty good, and the crowds are good," he shrugs. "Really no need to quit while we're still having fun."

Does Darrell Royal's passing from Alzheimer's or mortality in general ever make you think?

"It's wonderful how we have spent our lives," agrees Bobbie Nelson. "I think we should never stop doing things, learning to do new things, and playing. I don't need to quit. I'd rather do some more, too. The band has got a new album, and Willie used the band for the next album. It's really ... nice.

"I think country music is soulful music," she adds. "I don't think you can listen to country music without hearing the soul of the people. It's about people, the lives of soulful people. It's music that's very similar to the old soul music. Country is about real people, happiness and sadness both."

"There's nothing like playing something from your very soul and your heart," she nods. "A lot of musicians don't get to do that."