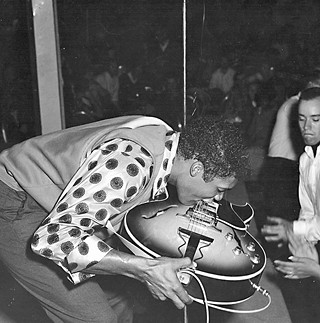 Albert Collins and Jimmy Reed sideman Bobby Blackmon graces the cover of 'Eccentric Soul: The Dynamic Label,' most likely in San Antonio circa the mid Sixties with his band Bobby Blackmon & the Soul Express

On a recent Friday night at the War Room, a dark bar on a haphazard entertainment strip just north of Downtown San Antonio, a meeting of the Alamo City Soul Club hits full swing. Three DJs take turns plucking local platters from the bottomless well of San Antonio soul, funk, and R&B. The hiss and pop of 45s from Westside stalwarts Sunny & the Sunliners, the Royal Jesters, and Sonny Ace fills the room, while a disco ball lights up a dance floor that – for most of the evening – sits completely empty.

Despite the efforts of people like Alex LaRotta, music scholar and founder of the local soul night, the city's rich R&B history remains vastly underappreciated and practically unknown to those outside of South Texas. That hidden tale reveals itself in the grooves of countless vinyl artifacts adorned with the colorful labels of small San Antonio imprints: Satin, Sunglow, Tear Drop, Warrior, Wildcat, Jox, Jester, Key-Loc, Cobra, Dynamic, and on and on.

"San Antonio had many, many record labels that popped up," explains Ruben Molina, author of Chicano Soul: Recordings & History of an American Culture (see "A Browner Shade of Black," Dec. 28, 2007). "Down in Texas there were 15 to 20 different labels doing this kind of music. A lot of things that wouldn't have a chance of being recorded in New York, L.A., or Chicago got recorded.

"In San Antonio, you had that really hard R&B influence and Tex-Mex accordion style, but a lot of groups like Sunny & the Sunliners didn't want to use the accordion, so they would use a couple of saxophones to emulate that accordion sound. They were able to fuse all that.

"To me, it's a blacker sound and more soulful than what was coming out of L.A."

In the Sixties and early Seventies, when fierce discrimination and towering walls of segregation stood throughout the region, blacks and Latinos were remarkably integrated in the clubs and recording studios of San Antonio. Mickey & the Soul Generation was a largely instrumental sixpiece that laid down furious funk for six years beginning in 1967. Led by organist Mickey Foster, the Soul Generation formed when he and longtime saxophone buddy Emil Carter cast their lot with another pair of childhood friends, bassist Gilbert Rivera and guitarist George Salas. After a couple years of dominating local talent shows, they scored a hit in 1969 with the heavy funk distortion of "Iron Leg," re-pressed and distributed nationally by a New York label.

"All of a sudden we were on tour with Sam & Dave," Carter remembers. "We couldn't believe the difference being with a group like that. We had people taking our equipment out and setting it up for us. We were never used to that."

The world largely forgot Mickey and company until Josh Davis, better known as DJ Shadow, championed the group on Iron Leg: The Complete Mickey & the Soul Generation, a 2003 compilation on his own Cali-Tex label. "Mickey & the Soul Generation are my favorite funk band," he testified in the exhaustive liner notes. Hooking in Davis was "Get Down Brother," a mid-tempo groove of searing B3 organ, rolling congas, and chicken-scratch guitar. All the while, Carter traded lines with drummer Andrew Gordon.

"Get down, brother, get down."

"That's what really blew my mind," Davis remembers. "I used to drive around bumping it like a hip-hop record. It was so unlike anything else in the deep funk canon, period. It was just totally different.

"That's when I became obsessed with not only their music, but trying to figure who they were and where they were from, because their music really reached me."

Davis began his quest in the late Nineties, when a world of rare grooves weren't a Google search away.

"The Internet was just a teeny tiny piece of what it would become and wasn't really looked at as a resource at all for tracking down music and tracking down artists," he offers. "Records had a really mysterious, mystical quality if you were a collector, especially of really obscure and rare things. It was much more of a gradual painstaking process to put together these pieces of the puzzle."

Long out of print, Iron Leg will be reissued in May as a triple LP on Numero Group with a newly discovered vocal track, "Listen (to the Cry of the People)."

"That's one of the songs I wrote and I didn't even know we ever recorded it," Carter laughs. "It was a forgotten song.

"When I wrote that song, my number one man was Marvin Gaye. That's when he came out with What's Going On and the Vietnam War and all that stuff was going on. That's where I got the inspiration for it.

"I'm excited, because I haven't even heard the song. I can't wait."

Of all the city's soul endeavors, Numero Group co-founder Rob Sevier argues that Dynamic remains the most essential. One of nine labels founded by the late San Antonio real estate mogul Abe Epstein before leaving the music biz in 1973, Dynamic cut an eclectic crop of 20 sweet soul singles and B-sides in the late Sixties.

"Record for record, it's the best [San Antonio] label, period," Sevier declares. "It's flawless soul. It's a great label that needed to be given this sort of elaborate, loving treatment."

Like the 42 archival recordings that came before it on Numero Group, Eccentric Soul: The Dynamic Label is indeed elaborate, loving, and mildly obsessive. The latest in the Chicago imprint's signature Eccentric Soul series collects 28 vocal harmony sides from the Commands, Willie Cooper & the Webs, Doc & Sal, and more. Every act, no matter how fleeting their flirtation with success, has a compelling story carefully documented in the sprawling 6,000-word liner notes.

The pop perfection of vocal quartet the Commands – whose first single "No Time for You" took local airwaves by storm in 1966 – materialized when servicemen from as far away as Montana and Spanish Harlem met at Randolph Air Force Base on the outskirts of town. On the flipside, local Navy seaman Ricky Davila of Doc & Sal wrote his lilting duets half a world away aboard the USS Saratoga. Galveston transplants Willie Cooper & the Webs parlayed their Dynamic sides into a trip to the Big Apple and a 1967 single on Atlantic. The group reached No. 32 on the R&B charts with "Give In," released on Popside later that year.

"Oh God, that was our dream, man!" cries Cooper. "We'd be practicing until 2 or 3 o'clock in the morning on street corners, talking about when we'd get to play the Apollo. We thought we were on our way to becoming big stars, but it's tricky.

"We were doing gigs, but we weren't making any money. We were just getting enough to live day by day and week by week or month by month. All the money we'd make would go to the office, and the office would just give us enough for rent and that kind of stuff. It was a bunch of crap."

Broke, Cooper and the rest of the Webs retreated to Texas in 1968.

With the Dynamic compilation and Iron Leg reissue, Numero Group is just beginning its vinyl excavation of Alamo City. The label has licensed Epstein's Jox and Cobra output and already has a 3-CD/5-LP behemoth in the works for next year, tentatively titled Epstein Recording Co.: San Antonio, Texas.

In February 2009, hundreds of music fans flocked to the tiny town of Clear Lake, Iowa, to memorialize the day the music died.

Fifty winters after the tragic death of Ritchie Valens, Buddy Holly, and the Big Bopper, Ruben Molina was invited to school folks on the hidden history of Chicano rock and soul. After playing record after record – including a slew of San Antonio R&B – Molina was approached by then Rock & Roll Hall of Fame President Terry Stewart. He was pissed.

Stewart has more than 30,000 records in his collection, yet he'd never heard any of the songs spun by Molina, who chuckles at the encounter while recalling his reply.

"This is the last undiscovered part of rock & roll."