The Prodigy & the Prodigal

Sons of Fathers pull away from the pack Well I'm working every day to make something of myself

Working every day to please the faces on the shelf

I'm a son of my father

Here's the story of two men, polar opposites in temperament and upbringing, joined in the single-minded drive to live a life of music, to make their way as performers and professionals. They're Sons of Fathers, driven to honor – and to discern themselves from – their respective paternal legacies.

In the beginning, there wasn't much love lost between David Beck and Paul Cauthen. Back in 2009, the two men ran in similar musical circles in San Marcos and frequently found themselves vying for the same gigs at the same clubs. A year later, they found themselves on a songwriting residency of sorts in Brooklyn, drinking beer.

"The bars stay open until 4am up there," explains Beck. "So we took advantage of the extra time."

Writing and playing together, the pair quickly realized that between their musical alchemy, their matched bootstrapping work ethics, and their naked ambition, they just might have a going concern on their hands.

"We had the same goals and crossed paths at the right time," nods Beck. "A year later, it probably wouldn't have worked."

For David Beck, music informed the gestalt of childhood.

"Nothing's different than when I was 13."

Aloof at times, and at others dispensing a dry, crackling wit, Beck's the sensitive cad who, despite his best efforts, will always break the hearts of women who fail to understand their status as his second love.

Of the two men, Beck is the seeker, a restless soul obsessively documenting every moment of every tour in his journal, deploying a cinematographer's knack for when to linger and when to frame a tight shot of intimate moments. His journals are so detailed, in fact, that Cauthen groans when it comes out that Beck emails these journals to members of the local music media. For his part, the latter remains unapologetic. Those journals are his personal gold mine, because the road yields endless songs.

Beck's also the half of the partnership whose surname prompted a cease and desist order from Beck Hansen just after the first pressing of the duo's debut, Beck & Cauthen's Sons of Fathers. (Revisit last year's SXSW "Picks 2 Click" roundup, "The Young & the Restless," March 9, 2012.)

Paul Cauthen bears a specific kind of Texan masculinity – ruggedly urbane, brash, and warm – his swagger loosely cloaking a tender emotional core. Raised in the church in Tyler, Cauthen was mentored in music at an early age by his minister grandfather, Jim Paul Cauthen, who taught him to sing.

Of course, if you want to find the rowdiest, troublemaking-est kids, all you have to do is look in the pews of the nearest church. Start with the preacher's kids first. During his senior year of high school, Cauthen was busted on a pot possession charge and placed on probation. Despite being shipped off to a Christian school in West Texas that fall, his partying ways soon caught up with him. Not only was he kicked out of school, but he wound up having his probation revoked and serving his original bid in jail.

"That was when I hit rock bottom, learned about myself, and decided what I wanted to do," reflects Cauthen.

After his bid was up, Cauthen beat it to Colorado, "became a hippie Wookiee for a while," and immersed himself in music. When his best friend passed away in 2009, Cauthen returned to Texas, eventually landing in San Marcos where the banks of the Blanco River delivered his musical future in the form of a lanky bass player.

Lumping in Sons of Fathers' newly self-released sophomore album, Burning Days, with all of those other neo-Americana acts slouching toward the musical middle class with their banjos, mustaches, and vintage waistcoats will come easily enough for surface dwellers. And yet, what your Mumfords and Sharpes and Lumineers lack is a sense of place. Sons of Fathers' earthen territoriality grounds them musically, lyrically, and personally (see "SXSW Record Reviews," March 15).

Hear it in Cauthen's worldly baritone and multifaceted guitar playing. Bust a move to it during Beck's whoops of joy and thumping upright bass. Harmonize with it as their voices lock together in a folksy, puzzle-piece choir and their sextet starts to choogle and stomp.

Produced by legendary Texan Lloyd Maines and 18 months in the making, Burning Days evokes boot-scooting at the Dixie Chicken, watching the Marfa lights, and summiting Enchanted Rock. Onstage, it bursts into vibrant life. Amidst the gospel, Everly Brothers, Hank Williams, and Beatles, you can smell the cedar smoke and Gulf of Mexico.

The Sons' relationship with Jessie Scott should be added to the DIY playbook for all aspiring musicians. The first female FM deejay in the States and founder of the Americana Music Association, Scott met David Beck during the few short years she lived in Central Texas. (She's now based in New York.) He approached her with a demo of his pre-Sons work, and she was hooked.

"David's an amazing songwriter, producer ... every vector, he has it all," she stresses.

Once Beck and Cauthen joined forces, Scott passed on their demos – which eventually became the band's eponymous debut – to Marty Schwartz, onetime manager for the Eagles and Tone Loc.

"I always said the Eagles were the only band I have worked with that no matter the format, if I saw a radio tower in the sky, they would play the record," writes Schwartz in an unsolicited email. "I have not had that feeling since '76. ... I feel [that] way about Sons."

Upon hearing that early demo, Schwartz, who was semiretired at the time, dropped everything to manage the band.

In addition to forming alliances with industry vets like Scott, Schwartz, and Maines, Beck and Cauthen continue proving that this ain't your daddy's music industry. This includes not only spending more days on the road than at home – the band put 70,000 miles on its van in less than 18 months – but also harnessing social media in order to promote the new album and upcoming shows. Working every day for yourself remains its own reward.

"I'd been playing music and having all these cool experiences, but under the wing of someone else," waves Beck. "It's really gratifying to do it on my own."

"We're really excited about this record," adds Cauthen. "It feels like it has some legs. It's all real. There's no bullshit. Every word in that, we meant it."

Authenticity's never been an issue with Sons of Fathers, I reply.

"You should hear our dubstep record," Beck retorts. 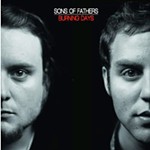