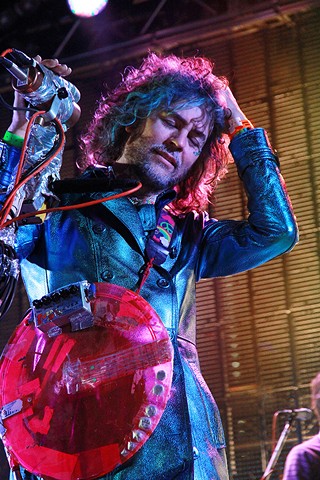 
Jim James' spiritually inclined, soul-searing trip-hop-rock felt like church, dark and sacred. From the opening strains of "State of the Art (A.E.I.O.U.)" to the meditative minor key of "All Is Forgiven," the My Morning Jacket frontman ministered to all those present, and it was transcendent. Then the Flaming Lips took the stage and crashed that transcendental plane to smithereens. As Lips frontman Wayne Coyne prepared his cumbersome prop, a fake baby strapped to his body with dozens of lighted tubes, he issued a warning: "We've got an album none of you have heard, and a show we haven't even seen, so if we fuck up, go back home and tell everyone we rocked it out." The band subjected the rapidly dwindling crowd to an hour of oddly paced new material interspersed with drawling, unintelligible patter from Coyne, which felt like an enormous middle finger to the audience, 90% of which comprised families, gray-haired folks on dates, and chubby sorority girls sucking booze-infused Jell-O out of veterinary syringes. These people want the bunny suits, the confetti cannons, the upbeat songs they can sing along to and that make them feel happy, not watch a man yank a grown woman around by the hair in the name of "art."