In the overflowing clusterfuck of a SXSW Saturday night, out-of-towners can enjoy what we locals would hear on a normal visit to the White Horse. Each of these six Austin acts are regulars on the small corner-pocket stage of the popular Eastside honky-tonk where whiskey shots are downed by guys with neck tattoos and girls in cowboy boots and skirts. Country singer/songwriter Noel McKay opens with Hill Country ballads ranging from sincere to playful. Then comes one of Austin's best guitarists, Mrs. Glass, a sharp-dressed picker with a deep microphone moan that will make you want to move here just for his Tuesday night residency. Afterward, cerebral songwriter Ramsay Midwood leads his band through a set of psychedelic country blues from a witty, dark comedy perspective. Wood & Wire, a string band quartet with deadly musicianship, tight harmonies, and classic songwriting bats cleanup. Rural music recedes from the Urban Achievers Brass Band, a soccer-team-sized collection of horns playing New Orleans' style tunes with a Texas tilt. Closing is John Beauchamp's once flatlined roadhouse country band Them Duqaines, who use hot guitar, train beats, and primo fiddling to keep the energy up until the house lights come on. – Kevin Curtin

Tastemaker blog BrooklynVegan plucks talent from around the country for its annual showcase, erring to a metal crowd for this year's collection. Maryland's Full of Hell dirties its hands with the blending of the grimiest hardcore punk and sludge into a massacre of sound. Forth Worth's Pinkish Black released its self-titled debut last May, with Suicide, Magma, and Scott Walker as influences. The hellish, death-centric fury from the blues stockyard city hits like a smack in the face, but offers ambient refuge somewhere in the chaos. Bearded quartet Mutilation Rites, hailing from the same birthplace as BrooklynVegan, continues the sonic assault with grimy black metal from the not-so-mean streets. Baroness' John Baizley closes the night with an acoustic guitar rather than Baroness. After what he's been through recently, expect harrowing folk metal. – Abby Johnston

Rather surprising that Get Hip's star act the Cynics won't be on this bill, considering they'll be touring around this time and the long-running label was initially built to showcase those venerable garage-punk warhorses. That's okay – there'll be plenty of carport-rockin' to be had, commencing with lysergic droning by New Orleans' Bipolaroid. Locals the Ripe offer some 13th Floor Elevating of their own. Atlanta's Subsonics wouldn't be outta place on a bill slotted between the Gories and Oblivians. Austin's the Ugly Beats wheel the Farfisa on, as well as a crunchier guitar sound and some of the strongest songwriting of the evening. Dallas institution the Mullens then takes over for all of us who prefer a strong dose of Stooges/Dolls power-snot in our R&B. Vancouver's Authorities continue that line, adding song titles like "Teenage Piss Party." – Tim Stegall

Left coast legends the Pharcyde headline, but hit the Club early so you don't miss UK import Jamieson, who raps like an energetic Streets over Little Brother beats on last year's I Came, I Saw, Vol. 3, his fourth release in three years. Tallahassee duo After the Smoke parlays the retro rhythms of The Cool Kids with Theophilus London's penchant for style, while Bronx native Max Burgundy goes as deep as a forensics team on last year's The Murder of Mark Fuhrman mixtape, a discourse in what it's like to be "Born Loser." More optimistic is Austin's own Cory Kendrix, a slick-talking rapper whose affinity for saliva preoccupies last year's laid-back Free Beer mixtape. Also out of the ATX, the world awaits Gerald G's I Am Mr. 512; grime rapper Dubb Sicks' November release, Beauty From Without, gets you acquainted with Sixth Street; and the League of Extraordinary G'z keeps the city streets on lock. They wrestle Queens trio Children of the Night, San Antonio duo Mobbin' No Sobbin' (the smoked-out combo of Western Tink and Beautiful Lou), the Weeknd affiliate Billionaire B, and Chicago rapper Omen, whose A Glorious Cool EP pours a bottle out for J Dilla. – Chase Hoffberger 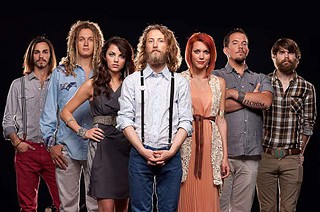 Mississippi's eclectic showcase kicks off with native Texan Kallie North, having taken root in the Delta to pen her upcoming debut, polished country tunes steeped in "Life on the Backroads." Rosco Bandana runs indie folk into the swamps with its debut disc, last year's Time to Begin, the Gulfport septet capable of rambling unruly and energetic even on Jason Sanford's most introspective and lovelorn ballads. Charlie Mars' smooth southern croon and easy rolling acoustic guitar cast an enchantingly mellow spell. Following up the breakout success of 2009's Like a Bird, Like a Plane, the prolific Oxford, Miss., songwriter's sixth LP, Blackberry Light, spins soulful AAA radio gold. Laying down electrifying blues, Jackson's Eddie Cotton Jr. rips standards and his own originals with equal versatility and a gospel flair, complemented by the grittier blues and southern funk of Grady Champion's latest, Tough Times Don't Last. The Good Paper of Rev. Robert Mortimer unloads an experience unto itself, the funeral director leading a service of blues, funk, and rugged soul that could only be born on the Delta. – Doug Freeman In their fourth annual showcase, magazine turned TV channel turned record label Nat Geo brings yet another loaded bill of rhythm peddlers from Brooklyn to Buenos Aires, Italy to Israel. With two stages and staggered time slots, the showcase promises a nonstop barrage of global grooves. São Paulo trio Bonde do Role opens the indoor stage with a brash interpretation of Brazil's booming baile funk, while Brooklyn eightpiece Red Baraat assaults the ears with an insane mix of Indian wedding music, D.C. go-go, and second-line brass. It's an almost impossible act to follow, but Cali vets Ozomatli are up to the task. After all, the Grammy-winning septet raised such a ruckus at SXSW 2004 that nearly half the band was arrested. Local Latin orchestra Grupo Fantasma grabs the torch before Bajofondo closes with new-school tango. Hi Rhythm opens the patio stage with the signature Seventies grooves they cooked up as house band for Memphis' Hi Records, home to soul giants Al Green and O.V. Wright. Israeli born with Ethiopian roots, the stunning soul-jazz vocals of Ester Rada make her a good bet for breakout artist of the festival. Jamaican institution the Skatalites – still boasting two original members from their Sixties heyday – shut the patio down. – Thomas Fawcett

The improbable rise of New Orleans bounce from hyper-regional project music to national prominence happened as fast as the asses you'll see jiggling on stage at this stacked showcase. The frenetic and call-and-response music has been bumping NOLA wards since the early Nineties, but in the past few years, it has landed in The New York Times and on NPR thanks to breakout artists like Big Freedia and showcase headliner Katey Red. The latter, along with most bounce acts garnering national attention, is openly gay and transgender, a so-called sissy, but that's by no means synonymous with the genre. Cheeky Blakk sums up the night's theme in "Left Cheek Right Cheek," which demands, "Work them hips, work them thighs/Bend that ass over, now exercise." Commanding the booty to clap will be late Magnolia Shorty protégé Magnolia Rhome, Ha Sizzle, Big Choo, Diamond Dolls, and more. Also of note, the self-proclaimed "first white boy to make the beat," Culotta Rock. Where my shakers at? – Thomas Fawcett

Local promotion collective Psychedelic Light & Sound claims its aim is to "overload the senses." The galactic journey begins with Föllakzoid, the Chilean space-rock wonder with quintessential new LP II on the hip Sacred Bones imprint. Label- and citymate the Holydrug Couple follows with liquid crystal acid pop from its own new Noctuary. Getting Sergio-Leone-wasted on peyote, Spindrift wafts into the SoCal desert, baking its faux soundtrack music in an electro-acoustic crust. Shifting continents, Berlin's Camera begets Krautrock so unabashed on its debut Radiate! that it's led to patronage by Neu!'s Michael Rother. Taking a break from recording album No. 3, Brooklyn's Royal Baths indulge in the strain of psychedelic grunge expected from ex-members of hipster psych acts Ty Segall and Thee Oh Sees. Also incubating a new record, SXSW vets the Warlocks close by burning down the stage with their droning riff rock. – Michael Toland 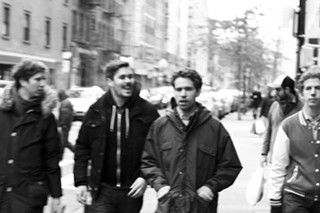 The fastest-growing lil' fest in Texas, Chaos in Tejas borrows market share from SXSW to preview this year's lineup. Led by the Marked Men's Jeff Burke, the Japan-based the Novice keeps its Denton parent's faith with intensely performed but melodically solvent garage punk. Rooted in the Lone Star State, Parquet Courts calls NYC home, though the rattling, melodic post-punk found on its acclaimed debut Light Up Gold would be at home anywhere. The bracing noise pop of Tampa's Merchandise, which offers all its releases as free downloads on its website, finds a spot between amp-frying distortion and plaintive melody so sweet it should come with a toothbrush. Booming out of Dallas with a slash-n-growl, the bludgeoning thrashcore of CiT vet Power Trip recalls prime movers in the Eighties underground metal scene. A totally self-contained entity, Seattle duo Iron Lung sprays EPs, LPs, and 7-inches over the landscape at the furious pace its grindcore/power violence demands. Its latest single lasts 20 seconds. – Michael Toland