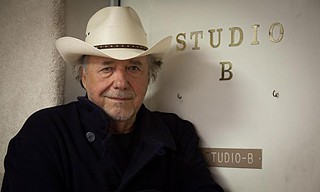 In a career that's lasted more than 50 years, country music veteran Bobby Bare has seen his share of ups and downs. He's now on the upswing again thanks to the release of Darker Than Light, music he refers to as "folk country."

"I really love those old folk songs and always have," he enthuses. "Hell, all my Sixties hits were all folk songs. My first hit, 'Detroit City,' the chorus was lifted off a big hit called '500 Miles.' The record company labeled my first albums folk country. RCA put it right on the label into the Seventies until I started working with Billy Sherrill. So this album is not a departure."

Among the songs on the LP are such now traditional favorites as "John Hardy," "Shenandoah," and "House of the Rising Sun." In a twist that gives the whole project a Johnny Cash American Recordings feel, Bare covers Alejandro Escovedo's "I Was Drunk" and U2's "I Still Haven't Found What I'm Looking For." Escovedo even chips in with backing vocals on his song.

"Those are just good songs," the 77-year-old Bare explains. "Alejandro makes really good records. Plus I've gotta be friends with him. He's got three of the best, heart-stoppin' grandkids you ever saw."

"What's so great about Buddy is his taste. He's not a pushy guy. But he sets the standard in the studio. We were going for feel. Nothing else mattered. Buddy gets that almost instantly and everybody goes along with it. You don't get that from anybody except Buddy.

"I just went out into the studio and sat there with the musicians, right in the middle of that good feel. If I live to be 100, it wouldn't get any better than that."