The list of rappers to come out of the unofficial southern capital of Atlanta over the past decade runs longer than a Lil Jon "Yeahhhhuhhhh": 2 Chainz, Gucci Mane, TI, Young Jeezy, Yung Joc, Gorilla Zoe, Cyhi the Prynce, and the illustriously progressive Ying Yang Twins. Keeping that tradition alive in the year 2013 is the flamboyantly materialistic Trinidad Jame$, a charming and charismatic MC whose January debut Don't Be S.A.F.E represents the Trinidad and Tobago native's claim to the next southern rap throne. A slew of young buck ATLiens will try to keep the competition close, namely the barrel-voiced ForteBowie, who released the Something About Bowie mixtape in 2011 and shows up on Jame$' "$outhside," and slick-talking Eastsider Rich Homie Quan, whose October mixtape Still Goin In harks back to B.o.B. before the glamour and glitz. Elsewhere, DJ Speakerfoxxx has a résumé that includes Rittz and Gangsta Boo; Scotty's muscle moves in slow as molasses; and kush-loving quintet Two9 packs an R&B-hued style of rap that picks up where G-Side left off. Sean Falyon, Will Brennan, Rome Fortune, and the soulful RaRa round out this entirely trill bill. – Chase Hoffberger

Arriving late to the yearly showcase of Spain's musical exports will mean missing some epically morose love ballads sung by the beautiful Miren Iza. Tulsa's wounded frontwoman will make you believe in love even if she doesn't, tastefully twanged rock et al. SXSW virgin Track Dogs barely qualify as Spanish given its pair of Irishmen, one Englishman, and a guy from Ohio. Nonetheless, its kitchy roots rock, utilizing acoustic guitar, whistling, banjo, ukulele, trumpet, cajon percussion, and resounding four-part harmonies, will set a high bar for the bands that follow, including Pájaro, a Spanish Dick Dale enjoying his career renaissance. Madrid's Supersubmarina on its first American vacation may be a little out of place with its extremely polished power pop oozing boy-band romance. Recalling recent Black Angels' recordings, Cuchillo plays artsy psych-folk, laying mellow vocals over a harmonium drone. Headliner I Am Dive duos up space pop with guitars, laptop, and soft whispers. – Kevin Curtin

As Iron Maiden will tell you, the regions below the U.S. remain ravenous for metal. That's for both homegrown amp-abusers as much as international acts. Six of them come together here. Escape comes from Havana with a harsh, pounding roar and a chip on its shoulder, battling oppression with hammer and tongs. São Paulo's Attomica reels in Eighties metal, trucking in the trad thrash its contemporaries Sepultura left behind. AOR hard rock at its core, Motor boasts a punk edge, reflecting the difficult lives of many of its fellow Mexicans. Belo Horizonte's Eminence likewise mirrors the frustrated rage of its underclass, placing unusually high in Brazil's music competition Skol Rock despite its angry deathcore. Thrashing death powers Havana's Agonizer as well, its frontdude making his high-volume discontent clear. Fellow Cuban killer Ancestor eschews not only politics, but anything else that could be considered reasonable in its traditionally corpse-painted black metal. – Michael Toland 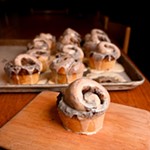