Dazed, But Not Confused

The next 96 hours of SXSW Music starts here 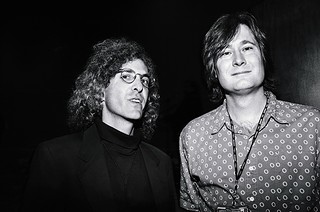 Welcome world, to the wellspring of live music you won't encounter anywhere else on the planet – even Texas. Whether you're an unknown garage band from Colombia or Justin Timberlake, your intent's the same: to catch a spark. And despite the Lone Star State entering its third year of devastating drought, Austin's got all the kindling come March, and hell, let's just say it, year-round. After South by Southwest, we've got one music festival after another – Old Settler's, ¡Pachanga!, Chaos in Tejas – and that's not even what makes us the so-called Live Music Capital.

What Austin offers that few cities anywhere else can: 110 stages within a 10-minute radius. That's what SXSW Music will employ this week. True, they're not all going concerns throughout the year, but that most of these live music platforms are situated within walking distance of one another highlights a strength of our fair city for decades now. With a metropolitan population to rival San Francisco, Austin's intimacy remains its charm, a high-rise of steel and glass surrounded by Hill Country. At the center sit more stages running nightly than even we can count. What you'll experience in the next four days plays out as an extreme version of what goes on here most of the time, even come fall's twin festivals, the Austin City Limits Music Festival and Fun Fun Fun Fest, but we're ready at the drop of a ten-gallon hat to take to the street for music. Austin Rodeo began last week concurrently with the SXSW Interactive and Film Festivals.

Indeed, even as Rock & Roll Hall of Fame hoofer/screamer/shredder Prince confirmed a Saturday night showcase at La Zona Rosa earlier this week, SXSW's already hosted more stars than can be mapped, everyone from Bill Gates, who closed SXSWedu last Thursday, to honorary local Quentin Tarantino, in town the same night and fresh off his Oscar win to honor Austin's Richard Linklater and Dazed and Confused at the Texas Film Hall of Fame Awards. Rock stars? How about Shaquille O'Neal making the SXSW trade show list to one side on Sunday when he walked through? Musicians? Jane's Addiction played a surprise show atthe W Hotel on Monday.

Of course, it still gets as hot as the Sahara here, and our constant population increase over the past decade continues hiking rents, slowing traffic, and saturating our food, film, and music cultures, but I hear Portland's still very nice and spacious.

For those returning SXSWers, some things have changed since last year. As you might surmise from this issue's affecting cover story by Michael Corcoran, SXSW Creative Director Brent Grulke died unexpectedly last summer. His passion for music propelled this festival to its current level of notoriety, so expect many tributes to him this week, including some from his favorite onetime charges, the True Believers, who re-formed in the wake of his death and play several shows this week.

Speaking of stars, besides the reunited Mavericks' Raul Malo sitting in with the Trishas, Gary Clark Jr. confirmed that he's flying in for the AMAs as we went to press Tuesday. Given his sweep of awards in this issue, he'll be walking out of the Austin Music Hall tonight with an armful of plaques like he's Carlos Santana on his Supernatural Grammy night in 2000.

What else do you need to know about your next 96 hours on the ground here? Some old haunts have shuttered: Lovejoys, Trophy's, Jovita's, Cheapo Records, and Ray Hennig's legendary Heart of Texas Music. The city's notorious indie venue, Emo's East, recently sold to local entertainment giant C3 Presents, so while there's nothing official on the club's SXSW calendar, don't be surprised if it finds use for a party or two. The Antone's you know relocates next week, new neighbor to Emo's. And while you're tooling around, tune in to the newest sound-of-our-town frequency, KUTX 98.9, where instead of corporate playlists, the jocks choose music to evoke the free-form radio heydays of the Seventies. Rolling Stone's own rock star, David Fricke, spins with host Jody Denberg Sunday morning at 10am.

Be kind to the locals now, like Beerland's triple local-label showcase tonight (Super Secret, Twistworthy, Threadpull), which mixes together homegrown bands you'd have already heard about if you lived in Brooklyn (Foreign Mothers, Kingdom of Suicide Lovers, Flesh Lights). Be especially nice to our service industry people, since half of them populate the acts you came to see. The carnival's in town, folks. Let it run away with you.

› "It was a wonderful experience, engulfing ourselves in the record, away from society, on an oasis in the middle of a barren land," recalls the Black Angels frontman Alex Maas about recording at the Sonic Ranch in West Texas. The local quartet, which hosts the annual Austin Psych Fest at the end of April, drops its fourth full-length, Indigo Meadow, earlier that month. "What's most important to us about music is what it does to people. It's therapeutic," he says. "Almost as if it's the most current tangible form of religion." The Black Angels evoke divine moods tonight at Buffalo Billiards, 10pm.

› Local synth-spazz duo Zorch has signed to L.A. indie label Sargent House, home to heavyweights including Boris, Russian Circles, and Omar Rodriguez-Lopez. Zzoorrcchh hits this summer. Keyboardist/singer Zac Traeger explains how having a support team will "quantumly increase" the experimental band's trajectory. "It's like only having red and green paint on your own, but then someone is like, 'Here is a bunch of blue.' So we will still paint in our own style, but have more resources to make 3-D IMAX movies instead of crayon drawings." Catch Trager and drummer/singer Shmu getting wild at their showcase tonight at TenOak, 11pm.

› Mess With Texas, Transmission Entertainment's free SXSW mini-fest, won't be messed with this year. Booker Graham Williams says he and co-conspirator Sean Carlson are simply too busy, but hope to bring it back next year when they have a perfect spot and more free time. Williams' Red River venue, Mohawk, makes up for it with free daytime shows all week and an incredible Wednesday night lineup that includes the Stooges (8:30pm), the Specials (10:50), and Ghostface Killah (1am); badge or wristband only. – Kevin Curtin