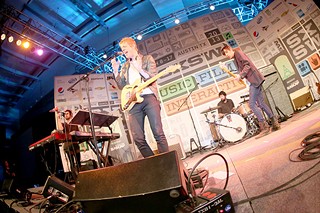 
Divine Fits has attacked SXSW with the desperate tenacity of an unknown band still looking for its break – not what you'd expect from a group led by two of the most successful indie rock songwriters of the past decade. On disc, Divine Fits gives equal sway to forebears Spoon and Handsome Furs, with black-lit electro-rock and taut Krautrock groove. Live, Britt Daniel rides shotgun to Dan Boeckner, supporting more than leading, though he delivered the final dagger in "Shivers." That was only the noon hour for the Radio Day Stage, an air-conditioned oasis in the din of SXSW offering the sort of eclectic billing hallmark of local sponsor, KUTX: Vampire Weekend, Dawes, and the overwrought indie soul of Seattle's Pickwick. Emmylou Harris & Rodney Crowell reunited for an all-too-brief teaser of their duets album, Old Yellow Moon, that didn't even scratch the surface of their respective catalogs. Solo and acoustic, Iron & Wine's Sam Beam took a couple requests (the tender "Naked as We Came") in a refreshingly unscripted set that traded his folk mystique for bare honesty and light humor. "Titles are hard to come by," he remarked in regards to "Grace for Saints and Ramblers," a stellar cut from his upcoming album, Ghost on Ghost. Daptone Records' big payback, Charles Bradley delivered a bruising soul revue with fall-to-the-knees sincerity that had some dancing in the aisles. "Can we go to church?" Barkley asked before the scarred plea "How Long." Yes, anytime.