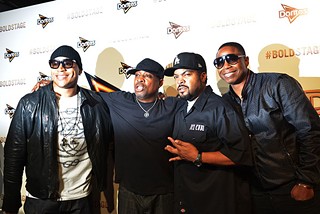 
White people. Red carpets. Hors d'oeuvres wrapped in bacon. High heels. Up-dos. Push-up bras. Dudes who may be yachters. Pepsi products. Jack Daniels gratis. Stacks upon stacks of Doritos Nacho Cheese corn chips. Thursday night on Fifth Street was a SXSW showcase, but make no mistake: it was marketed to the teeth. Lights down, host Esteban onstage: "In the words of LL Cool J, 'It's about to be bumpin' tonight,' so who's ready? First, we gotta plug in this vending machine." A six-story construction thus kicked into high gear, feeding heavy metal through two bug zapper-type objects, sparking up a high-definition virtual vending machine and thus bringing human beatbox Doug E. Fresh onto the stage. Damage done and Frito Lay now responsible for having brought forth a rapper, it's time to steal from the gospel of Public Enemy's Chuck D: "How do you sell soul to a soulless people who sold their souls to a giant bag of Doritos?" Tonight's four-act bill – Fresh, Public Enemy, Ice Cube, and LL Cool J – could double as rap's first-round Mount Rushmore, but the scene around Doritoville suggested it was anything but. Fresh's call-and-response cypher at the top worked Cool Ranchers into a frenzy, but that Baja Picante flavor fizzled shortly after, when host Esteban ushered in a pseudo battle of the bands amongst three up-and-comers and kept Public Enemy at bay. Heroic hype man Flavor Flav existed in absentia when the "Revolutionary Generation" took the stage, leaving chief preacher Chuck D to handle the set solo out front of an uninspired backing crew of Professor Griff and two stoic-looking S1Ws. We didn't stick around for Ice Cube or LL Cool J, but both those guys have done kids movies. Those kids love Doritos.