"Don't take any pictures of me smiling," Nick Cave warned us before welcoming his fans for autographs at Waterloo Records. Across the store, Thurston Moore and his new band Chelsea Light Moving signed records and took photos. Outside, hundreds of fans gathered to watch Tegan & Sara perform in the parking lot. The record store, still our music town hall. (by Sandy Carson)

Yesterday morning, I called Governor Rick Perry's office for comment on a widespread rumor that Daft Punk would play a surprise show at the Capitol that night. Perry was unavailable, so they referred me to the State Preservation Board, whose events coordinator, Robert Davis, answered the phone with, "I think I know what you're calling about." According to Davis, no superstar French DJs have scheduled a show on the grounds. It could still happen somewhere else, though, so keep your eyes peeled for giant pyramids or whatever it is they perform in these days. 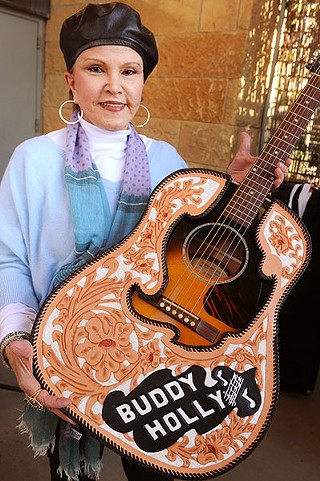 Meanwhile, South by Southwest finally announced yesterday how you can get tickets to Prince's show at La Zona Rosa. Consistent with other major performances this year, Platinum and Music badge owners can enter a lottery at www.sxsw.com to win entry. Additional tickets may become available later in the week for wristbanders, who will be notified by email.

"Lil Wayne ain't happening," Festival management tells us in response to whispers that Weezy would perform at the VEVO TV Control Room. How can he resist the ego stroke of a surprise SXSW show? Billy Corgan can't. His alt-era titans the Smashing Pumpkins perform at the Red Bull Soundstage with local Sabbath-biters the Sword and fellow Texans Girl in a Coma on Saturday. While the location isn't yet announced, Red Bull has constructed a large stage on the northwest corner of Sixth and I-35.

María Elena Holly, widow of rock & roll forefather Buddy Holly, keeps her husband alive through the Buddy Holly Foundation, which promotes musical education regardless of income, ethnicity, or learning level. On Tuesday, she joined foundation heads for a press conference announcing new college scholarships and the "Learning the Game" prize, which grants $10,000 cash, plus a custom guitar and other sweet perks, to one unsigned act at SXSW whose qualities best reflect Buddy's. Beginning next year, a panel of Holly aficionados will select finalists from the Festival roster to compete in a live music showcase for the prize. "Buddy Holly was a modern artist," explained foundation member Stephen Easley. "He wrote his own songs and composed and produced his music at a time when other singers didn't do that." 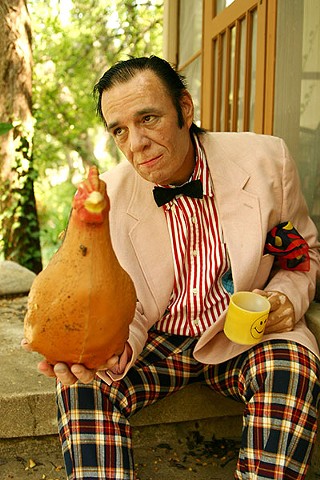 Nick Cornetti's house, loaded with cardboard boxes full of vinyl releases in various stages of completion, speaks to the hands-on, DIY production of his Pau Wau Records. The story of the local label's genesis, born of SXSW rejection and grown into a local tastemaker, echoes that sentiment. "All the bands I knew didn't get accepted to SXSW, so I had to figure out a way to get my friends some attention," he shrugs. In March 2011, he issued the first volume of The Lost Tribes, a yearly compilation CD with an accompanying zine that features an eclectic mix of Austin music, as exemplified by Dana Falconberry's delicate folk pop, Missions' pitch-black synth compositions, and the American Sharks' bellowing, metallic rock. "It did what it intended to do," explains Cornetti, who drums for the American Sharks and Cartright. "It got in the hands of someone who runs SXSW, and they put us on."

His American Sharks show potential for a national breakthrough, and labelmate Bill Baird's latest may be an early Best of 2013 contender. The crown jewel of Pau Wau's growing catalog, Spring Break of the Soul, a double LP of damaged pop brilliance, finds the local conducting a unique symphony of perfectly untuned emotion and playing by his own rules. Witness the Pau Wau gang in action for their official SXSW showcase tonight at the Velveeta Room, with Baird, Cartright, American Sharks, Longshots, Sleep Good, and Lean Hounds, 8pm.

• Randy "Biscuit" Turner, singer of local punk legends the Big Boys, gets a well-deserved exhibition this week at the South Austin Popular Culture Center (1516-B S. Lamar). SouthPop collected the flamboyant frontman's fliers, poetry, lyrics, and junk art for public viewing, Thu.-Sun., 1-6pm, and by appointment or chance. Earlier this month, his funky skate band's two best vinyls, Where's My Towel/Industry Standard and Fun Fun Fun, were re-released by Light in the Attic and local 540 Records. • You knew Willie Nelson was cool, but did you know he owns a ghost town? Those desiring relief from the hustle of Downtown Austin can head out to Willie's ranch in nearby "Luck, Texas" for the Heartbreaker Banquet, featuring performances by Jim James, Michael Kiwanuka, Shovels & Rope, Diamond Rugs, and Shakey Graves, all playing on either an old-timey medicine show stage or inside a tiny chapel on the grounds. Tickets are free, but you need to search Heartbreaker Banquet on social media sites for details and free bus pickup. Today, noon-11pm.

• Local instrumentalists Explosions in the Sky, who blew up after scoring the Friday Night Lights movie, collaborated with Ola Podrida singer David Wingo for the soundtrack of Prince Avalanche, David Gordon Green's new comedy with Paul Rudd and Emile Hirsch. The film gets a second SXSW showing tonight at the Topfer Theatre at Zach, 9pm.

• Last year's Austin Music Awards "Best Keyboards" winner A.J. Vincent isn't letting being dumped from his longtime band the Bright Light Social Hour slow his roll. "As a songwriter, I was riding the Bright Light train, but all the attention I've been putting into the band will now go elsewhere," reports Vincent, whose vocals and keys were weighty in BLSH's mix. For now, he joins up with his favorite band, Black Taxi, for a handful of SX shows: Sat., 12:30pm, Parish; Sat., 1am, 512; Sun., 8:40pm, Stubb's.

• Homecoming: Matt Drenik, who once fronted the popular Austin band LIONS, returns home with new outfit Battleme, a saccharine blend of psych, pop, and electronics produced by Thomas Turner of Ghostland Observatory. Battleme showcases tonight in the Empire Control Room at 10pm. On playing his first Austin show in two years, Drenik contemplates, "A lot of people are curious to see what the hell I'm doing." LIONS reunite at the 04 Lounge, Fri., 6pm.