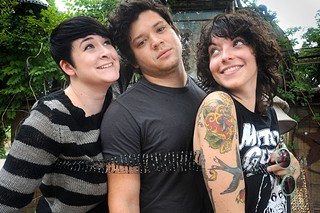 Electronic giants M83, Air, and Phoenix all hail from France, translated into English for the benefit of international audiences. Back in Austin, post-punk trio Crooked Bangs makes the French connection in reverse, barking its songs out en français.

"I've always been into the rhythm of French music without ever seeking it out," says guitarist Samantha Wendel. "Everything from Sixties French pop to late-Seventies/early-Eighties punk seemed to end up on my iPod. The language just serves music well."

Wendel and drummer Phillip Gonzalez, however, understand almost none of the lyrics that singer and bassist Leda Ginestra delivers. Ginestra studied abroad in Paris while at UT and also worked at a French student opera camp in the southern Dordogne region three summers in a row.

"It's almost like another instrument," offers Gonzalez. "When I joined the band, I was taken aback by it, and I was worried people would focus too much on what they couldn't understand. But what does it matter? It sounds awesome."

Wendel: "The only people it will alienate are the same people that don't want to rent movies because they have subtitles, and if you're that closed-minded, then you don't like having fun."

Crooked Bangs released its self-titled debut last year, and are slowly piecing together a second LP with local producer Mike McCarthy (Spoon, ... And You Will Know Us By the Trail of Dead, Heartless Bastards). The band credits McCarthy's recording boot camp for a tighter live performance and overall stronger presence.

"Mike taught us how to listen to each other," explains Ginestra. "The things we learned recording make a world of difference with us being cohesive and together as a band." 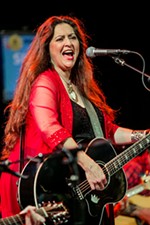