Playback: Blood in the Water

Headliners avalanche SXSW a week out from the music fest

At heart, South by Southwest remains a celebration and discovery of underground music. That's not changing. Nevertheless, when the initial list of acts came out I heard complaints of, "Where are the headliners?" Every year, it's the same refrain – followed closely then by the totally contradictory, "They don't care about little indie bands and locals!"

You can't have it both ways, people. Actually, with SXSW, you can.

By the time you read this, SXSW Interactive and Film will be under way. Because both disciplines are hardwired to music in one form or another, consider SXSW Music under way as well. This past week, after all, superstar headliners spilled like so much beer at a Sixth Street dive. The feeding frenzy has begun.

We've known for months Dave Grohl arrives as the Music Fest keynote speaker, but until this week, there was as yet no confirmation that his SXSW Film documentary on SoCal's Sound City Studios would feature an accompanying concert, as it did at Sundance in January. Monday, confirmation posted that the former Nirvana drummer's all-star supergroup the Sound City Players would perform. The Thursday night Stubb's showcase includes members of the Foo Fighters, John Fogerty, Stevie Nicks, Rick Springfield, Fear's Lee Ving, Cheap Trick's Rick Nielsen, Brad Wilk of Rage Against the Machine, Slipknot's Corey Taylor, Chris Goss from Masters of Reality, and more.

The beginning of the workweek also affirmed last week's guesstimate here that Iggy Pop and his Stooges would premiere the Detroit punk legacy's new Fat Possum album. That happens at Mohawk on Wednesday as part of Vans' multiday lineup at the Red River venue favorite. Once those two announcements hit back-to-back, you couldn't staunch the reveals. Brothers in braids and blunts: Willie and Snoop (Illustration by Nathan Jensen)

Also toting a documentary, the artist formerly known as Snoop Dogg will perform with Major Lazer and Mavado at SXSW in conjunction with the world premiere of his new documentary, Reincarnated. No longer living a Dogg's life, the film follows the rapper to Jamaica as he transitions from canine to Snoop Lion. Hip-hop heads were still digesting the news that 50 Cent also flies in for SXSW – though as of now, solely for SXSW Interview – while trying to acclimate themselves to Snoop's new patois. Of the mic skills set, expect Atlantan bad boy T.I. to add, plus there's still some huge headliners out in the wind as far as official proclamations.

Meanwhile, big-headed rodent superstar Deadmau5 joins another world class DJ, Richie Hawtin, for the SXSW's Interactive closing party at Stubb's on Tuesday night, which is open to Interactive, Gold, and Platinum badge holders. Also stealing the spotlight from unsigned bands is prince of pop Justin Timberlake, who KVUE reported as planning a private party and possible live performance. Who else? The more apt query would be, "Why not?"

"This isn't the year I planned to do a dance with the reaper," she reports, "but I've been doing this show for 30 years and I don't intend to miss it because of cancer."

Having recently had emergency surgery and scheduled to begin chemotherapy directly after SXSW, Moser's staying in the ring even though doctors advise some rest. Maybe she has something to prove, but it's also a matter of experience. Who else could manage the scheduling, the egos, the overall madness of our hometown Grammys? So the show goes on.

Illness or not, Margaret wouldn't want to miss this one. As the first AMAs since SXSW Creative Director Brent Grulke passed away, much respect needs to be paid. Backed by Grulke's friends the Wild Seeds, highly personal performances by Spoon and Divine Fits' Britt Daniel, Alejandro Escovedo, Adrian Quesada (with Grupo Fantasma horns), Robyn Hitchcock, and Susan Cowsill – all people Grulke loved – will play covers of his all-time favorite songs by acts like Los Lobos, Richard Thompson, and Gram Parsons. 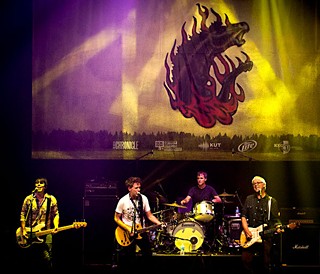 "Everyone up on that stage was pushed by Brent's love for music," remarked Wild Seeds leader Mike Hall. "Al, Britt, and Adrian wouldn't be where they are today without Brent's enthusiasm for their music."

Indie pop songwriter Ben Kweller, Latino rock explosion Brownout, country harmony darlings the Trishas with Raul Malo, and Bill Carter & the Blame (augmented by a very special guest) provide ample tunage between the accolades, but who will fill the late-night headlining slot? Moser won't spill. Looking back on AMA history and seeing names like Stevie Ray Vaughan, Pete Townshend, Doug Sahm, Townes Van Zandt, and Bruce Springsteen, it's clear it could be anyone.

› As if their stock hadn't already skyrocketed when they recently signed to esteemed metal label Nuclear Blast, local hard rock purists Scorpion Child are blasting off on tour with mystical blues rockers Clutch for 34 dates, followed by another rumored tour – one management won't yet confirm – with true rock & roll royalty: Motörhead. Scorpion Child showcases at SXSW Friday, March 15, at Warehouse 1100 with Clutch.

› Documentation of certain niches in Austin's music scene of the Eighties can only be found in the used bins at record stores. Compilation albums like Bloodstains Across Texas and Live at Raul's are essential showcases of Lone Star punk. Another storied comp from that era, 1985's Bands on the Block, curated by late SXSW Music head Brent Grulke and chief Hickoid Jeff Smith, collided Austin's "New Sincerity" alt-rock bands (side A) with cowpunk, hardcore, and noise (side Z). Recently remastered by Grammy-nominated engineer (and Pocket FishRmen axeman) Cris Burns, the long-out-of-print vinyl comp finally got updated for the digital world. Buy it on iTunes today. All proceeds go to HAAM.

› A fire scorched the Wimberly home of golden-voiced country singer Libbi Bosworth on Saturday. Photos she posted online showed a fully charred acoustic guitar and the interior of her house burned beyond repair. Her loved ones were uninjured, but everything else was destroyed. Friends are collecting supplies and donations on her behalf. Visit www.libbiville.tumblr.com to see how you can help.