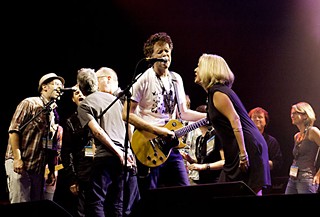 Faded Boogie, an impromptu group led by Eric Clapton's right-hand man and resident southpaw Doyle Bramhall II, couldn't buy a better introduction at this, the third Crossroads Guitar Festival. There in the background, somewhat, stands Clark on second guitar. "Jesus Gonna Make Up My Dying Bed" bristles and burns, then Bramhall cedes the band to his protégé, an Austin native and certified dues-payer, wiry and persistent presence on the Austin club scene, but still something of an underachiever. In the next two minutes, Clark obliterates all such ancient history.

When the guitarist steps forward and unleashes an atomic blast of Hendrix-hewn nuclear blues, he's not only standing next to the mountain and chopping it down, he's damn well Mount Everest – highest peak on the planet at this very second. So titanic is the moment, in fact, that a fuse blows and the whole of this soccer stadium outside Chicago groans. PA restored, Bramhall and Clark launch the latter's "Bright Lights." Everything that follows – Clark's major label record deal, the EP, the LP, all the festivals, an audience with the Obamas – stems from that stage on that day.

Eleven hundred miles away, down in Austin, a veritable changing of the guard occurrs.

Bill Carter and his wife Ruth Ellsworth co-wrote "Crossfire" for Stevie Ray Vaugh­an's final studio album under the SRV & Double Trouble stamp, 1989's unforeseen swan song In Step. As Gary Clark Jr. gains Argo-like momentum heading into the Austin Music Awards – a blues guitarist inadvertently taking up the standard felled in a helicopter crash in Alpine Valley, Wis. – historical symmetry between him and Vaughan meets in the person of Bill Carter. The song doctor/provider/writer counts clients from Waylon Jennings to the Counting Crows, but in Carter's reappearance at the AMAs this year, his pirate-boots jig between eras, movements, and the West Memphis Three.

When Carter teamed up on Letterman late last month with his partner in Keith Richards' fashion accents – Johhny Depp – they reprised "Anything Made of Paper," from the West of Memphis film documentary and motion picture soundtrack. Alongside Natalie Maines' stilling cover of Pink Floyd's "Mother," the Carter-Ellsworth composition grounds the new disc. A "gift" to Damien Echols, one of the three Memphis accused, the tune's poignant symbolism about imprisonment lands a far cry from Carter, Depp, and Gibby Haynes' surprise appearance at the 1993 AMAs as P. Butthole Surfers meets the Banana Splits? Not quite – and frankly, there's no telling who the Carters will have with them at the Austin Music Hall – but at the crossroads of all these touchstones, Bill Carter still finds himself caught in "Crossfire."

Natalie Maines makes the pitch-perfect reference point for the Trishas, four lustrous roots harmonizers whose 2012 debut full-length, High, Wide & Handsome, put them on the map locally while positioning them nationally. In Jamie Wilson, Liz Foster, Kelley Mickwee, and Savannah Welch blooms more than a little Dixie Chicks, and like their outlaw predecessors, the Trishas straddle our town's yesterday and today: partly imported, partly homegrown, entirely Austin. Apply similar attributes to Roy Orbison's modern crier, Raul Malo. Not only are his Nashville Mavericks reuniting at South by Southwest for a new album, the onetime Los Super Seven singer started serenading the Live Music Capital more than 20 years ago, and in guesting with the Trishas, his vanguard meets their new school. Carter and Depp might tell you that there's little justice in this world sometimes, but if there were, Malo and the Trishas would eschew instrumentation for sheer a cappella transcendence.

San Francisco-born, but reared Texan in Emory and Greenville, Ben Kweller inhabits the same sort of tweener status as the Trishas – too old for Austin's pre- and post-millennial baby boom of musicians, yet too young still to rub shoulders with the Spoon generation. Actually, as Spoon began to break out in the early Nineties, Kweller's Dallas-roaming grunge explosives Radish started loading into venues as big as Stubb's. The pop-prince-cum-singer-songwriter today boasts a wife and two kids as he hops between the Continental Club and Austin City Limits Music Festival stages, but big-picture-wise, his home base here in Austin agrees with him if last year's Go Fly a Kite remains any indication. Tuneful, thoughtful, youthful, said fifth full-length only promises that the best is yet to come. When local radio powerhouse John Aielli read a Valentine's Day email he'd received from Kweller about writing a song for his wife ("Lizzy"), more than a few morning commuters choked up.

Personally, that's how I felt when Grupo Fantasma won a Grammy for its horn-y Latino big band blowout, El Existential, in 2010. Backing Prince – once at the Belmont, no less – could only avalanche widespread exposure, but for the Laredo-born indie juggernaut to take home such an award on a global stage bordered on the miraculous. Guitar-brandishing off-shoot Brownout counts its own sizzling CDs as proof of autonomy from the Grupo mothership, so on another high-profile stage at the AMAs, their Raza rock makes a bid for replacing Michael Franti as Carlos Santana's opener next time through the Moody Theater.

Led by GrulkeFest saint Mike Hall and his Eighties lightning-rod rockers the Wild Seeds, AMA anthem "I'm Sorry, I Can't Rock You All Night Long," written by Grulke and Hall, won't be in effect come Wednesday. Because whereas Bruce Springsteen's headlining guest turn for the 2012 AMAs ended all too soon, this year, the Austin Music Awards might well just rock you all night long.