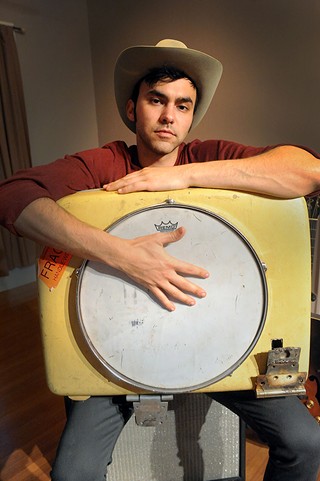 Already a triumphant year for Shakey Graves, 2013 currently finds the one-man band, informally known as Alejandro Rose-Garcia, quickly becoming a cornerstone of the Austin concert scene. His workhorse schedule of local shows keeps pulling in such audiences that he's become one of the most reliable draws in town.

Called on at home, the Austin-raised electric bard packs for an upcoming tour. The old, off-yellow suitcase sitting in the middle of his living room floor isn't full of clothes. It's his drum set. Graves beats the antique Samsonite, outfitted with a floor tom head, a tambourine, and a honeycomb of sound holes with drum pedals under his heels.

"I used to sit on it when I played," he explains. "Then I got drunk one time and stood up and it just changed the dynamic of the show, so I've stayed standing up in front of it ever since."

His percussion became a kinetic dance of subconscious reflexes: "Because I'm playing guitar, singing, and drumming at once, I can't really think about what I'm doing, which is great because I can just let my body do the work while my mind gets far out."

Graves attributes his unique guitar style, a herky-jerky fingerpicking of short, chromatic phrases, to not knowing how to play music traditionally.

"I'm still a retard when it comes to playing music in a learned way," he admits. "Which has ended up being good, because I'm not held back by any particular style."

Instead, his stomp-and-shake beats find harmony in his cranked acoustic guitar for a signature groove that underlines his mellow vocal rasp. Dipping his pen into a well of ghosts and illusions, Graves lyricizes his own experiences with mysterious perspective.

"I've had a lot of brushes with the unexplainable in my life, and that's redefined the boundaries of what I consider reality," he reveals. "I feel like there's a lot of spooky shit going down all the time that you can either focus on or forget. I choose to focus on it, and I encourage other people to focus on it too."

The next frontier for Shakey Graves is parlaying his local success into national recognition. Preceding his busy South by Southwest week with a Southern tour, he'll hit the road hard this year, including dates at international festivals. Graves also plans to record a follow-up to his home-recorded debut, 2011's Roll the Bones, which has garnered over 25,000 downloads to date.

The novelty of one-man bands wears quickly, and after that, they must succeed by the same standard of quality as any other act. Close your eyes and listen. Shakey's got it. – Kevin Curtin