While My Ukulele Gently Weeps

The revolution on four strings

We'd sat in neat rows waiting for this, adorably un-neat opener Glen Hansard banging out brushfire folk songs on a tarnished guitar first. Then a ukulele was produced from backstage. He smiled.

"You'll be seeing a lot more of these tonight."

If Pearl Jam's 1991 debut, Ten, rages, its frontman's Ukulele Songs, 20 years later, whispers. Take it seriously: Eddie Vedder solo in a room writing music on a ukulele. Four strings being blistered in fraught, slicing strums. Happy tones turned frantic, fierce. The singer translates his trademark polemics perfectly on the ukulele. And at a packed Bass Concert Hall last November, he made those songs live and die right in front of us.

Vedder shudders. The world suddenly feels shrunken down. A massive hall, thousands of people having paid premium prices, rendered silent and abiding for a Hawaiian string instrument. The rawness is almost uncomfortable. You start to wonder how we got here.

How We Got Here

In 2006, Jake Shimabukuro uploaded to YouTube his cover of George Harrison's "While My Guitar Gently Weeps," played on the ukulele. He sits humbly against one of Central Park's quiet, rocky walls, his fingers dancing across the fretboard in a way that feels both elegant and vicious. Eleven million views later, the spell remains every bit as potent.

"I'm just a big fan of the ukulele," Shimabukuro writes in an email. "I enjoy sharing my passion for the instrument with people. I don't take any credit for the ukulele's rise in popularity, but I'm honored some people think of me when they think of the uke."

Things have changed for Shimabukuro. Next month he embarks on a headlining tour, playing 24 theaters across the country. A few years ago he was lingering in Hawaii, extraordinarily talented and mostly anonymous, but since that video hit the Internet, Shimabukuro has played Conan, joined Jimmy Buffett on stage, and issued several charting albums. He's the ukulele's first rock star.

"It's always difficult to accept those kinds of compliments," he writes.

Watching Shimabukuro play – say, at the One World Theatre or Old Settler's Fest – produces shock and awe. Joy. He's a virtuoso in the truest sense of the word, living proof of the uke's potential.

"There's so much more to be discovered," he admits.

Regardless, there's pre-Shimabukuro and post-Shimabukuro. The latter traces directly to the fastest selling album in over a decade, Taylor Swift's Red. Its ukulele backbones the eighth most downloaded song ever: Train's overwrought but earnest "Hey Soul Sister." The ukulele's become ubiquitous post-Shimabukuro.

The ukulele isn't ancient. In fact, it only dates back to the beginning of the 20th century.

Inspired by the cavaquinho, a four-stringed miniature guitar from Portugal, its voyage begins in 1879 on a ship from the Portuguese island of Madeira, which docks in Honolulu. The passengers, overjoyed at the conclusion of the voyage, fire up folk songs on the highly portable European contraption. The Hawaiians are predictably enthralled, quickly adopting the tiny fretboard into cultural nomenclature.

According to the Ukulele Guild of Hawaii, initial coinage of the term "ukulele" appears in 1895, in the Hawaiian Gazette.

Island fever spread to the mainland in 1915 as part of the Panama-Pacific International Exhibition. The fair hit San Francisco to celebrate the completion of the Panama Canal and the city's reemergence following the 1906 earthquake. In the Hawaiian corner of the exhibition, there was a ukulele showcase.

Hawaiian music became a huge fad in the Roaring Twenties, with Tin Pan Alley songwriters cranking out the Pacific kitsch that persists on plasticware and AM radio crackles to this day. By the Fifties, Arthur Godfrey put the uke on CBS nearly every morning. A decade or two later, the quiet Beatle began his love affair with the instrument, and Eddie Vedder's beloved punk godfather, the Who's Pete Townshend, plucked one, too. Tiny Tim made it the means to a punch line.

That's where the ukulele remained, more or less, for the next several decades – a novelty. Israel Kamakawiwo'ole may go down in music history as exactly that, but make no mistake. He's no punch line.

The 700-pound, now deceased Hawaiian folk singer became accidentally famous with a perfectly candid ukulele medley of "Somewhere Over the Rainbow" and "What a Wonderful World." Sweet in the most earnest way, the mash-up stamps dozens of soundtracks and has garnered over 75 million views on YouTube since its release in 1993. It lingers in the American consciousness.

A girl Skypes with her grandfather, playing a dainty ukulele version of "I'll Be Home for Christmas." Her relative, predictably, can barely contain his delight. Too bad it's an iPad commercial, currently airing nationally. This is what the world looks like now.

The ukulele and the Internet have a very close relationship. Both have a very low barrier of entry. If you search YouTube with the query "ukulele cover," you will find hundreds and hundreds of burgeoning musicians, equipped only with a ukulele and laptop speakers. The face of the ukulele in 2013 appears to be a girl playing a song, in her room, uploaded and shared with anyone and everyone.

Take 23-year-old Molly Lewis. Her first YouTube upload wasn't made for anyone at all.

"I played a couple songs at a school talent show, and some friends wanted to hear it," explains the Orange County native. "I recorded my Britney Spears cover and uploaded it to YouTube. I didn't even show my face. I was too apprehensive."

Without any coercion or PR strategies, people started watching. So she uploaded another song, and another, gradually revealing her face, and then her personality. A few years later, Lewis was signed to a record label, releasing a national debut and touring.

"I ended up at ukulele after I tried guitar and mandolin," admits Lewis. "My dad sent it to me mostly because he thought it looked dumb. But it's so intuitive, easy to travel with. When I got up onstage with a guitar, people would immediately compare me to Joni Mitchell.

There weren't any preconceived notions when I started playing the uke."

The same could be said for Bright Little Field, a partnership of Nashville musicians Tom Littlefield and Jonathan Bright, who set out with the mission to cover a few Replacements songs on their ukuleles.

"We wanted to limit ourselves to the ukuleles and a little bit of percussion for each of the songs," says Bright. "It was like a challenge."

"It's hard to look macho or cool while playing the uke," laughs Bright.

"George Harrison once said he never met a ukulele player he didn't like," offers Kathy Murray.

She's been a musician in Austin for years, but for the last four, she's begun playing the blues on a ukulele with her husband, Bill Jones. Like the rest of the country, Austin's becoming a great place to play the ukulele.

"There's no hierarchy and no jerks," she states. "No matter what style you're playing or what you're interested in, everyone's excited about what each other is working on."

Like practically everyone else in the scene, Murray's close with the Austin Ukulele Society, a consortium of uke musicians who've been meeting once a month for two years. With a goal of simply uniting all local uke enthusiasts in fellowship and creativity, the group's first meeting gathered about 20 people. Now they're planning flash mobs.

"Patricia Vonne was performing out in Bee Cave," recalls Bob Guz, one of the Society's officers. "We were all hiding in the audience, and when Patricia took her break, out of nowhere we all pulled our ukes out and performed four or five songs. The look on the crowd's faces was priceless."

Try finding an antagonistic ukulele player. They're friendly, passionate, and thoroughly unafraid. You could say Tiny Tim ruined the ukulele for decades, but the instrument's practitioners never let popular perception bring them down.

"Everyone's so open to helping each other, showing each other how to do things, and sharing what they know," shrugs Guz. "With other instruments there's so much cultural and aesthetical baggage. The ukulele is so aggressively uncool in so many ways, all that baggage comes off the table."

Wilson Marks doesn't seem like someone who identifies with being cool, because hipsters don't pitch the concept of a ukulele choir to an elementary school music program.

Here we are, nonetheless, on a musty Wednesday afternoon in Maplewood Elementary, where halls smell like peanut butter and string cheese residue. There's a classroom and an even circle of chairs. Two dozen beautiful children, each holding a ukulele, let Wilson guide the underlying melody on an old piano.

He's helmed this program for the last four years. It's after school, and the kids meet once a week.

His students are banging out "Rockin' Robin." It's only a couple chords, but the ukes look natural in their tiny hands. Marks says he wants the teachers in the school to hear this, and that's perfect motivation. The kids are singing at the top of their lungs, uke strums rough and wavering. It's not Bass Concert Hall, but it might as well be.

After all, it's hard to be cynical when a roomful of fourth graders have become a ukulele choir. This may be the greatest version of "Rockin' Robin" in history. Someone told me that putting a ukulele in the hands of every child across the world might lead to world peace. Right now, I'm inclined to agree.

"Somewhere Over the Rainbow/What a Wonderful World," Israel Kamakawiwo'ole

"Ain't She Sweet," the Beatles

"Tonight You Belong to Me," Billy Rose & Lee David

"With Whom to Dance?," the Magnetic Fields 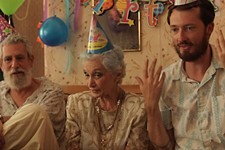