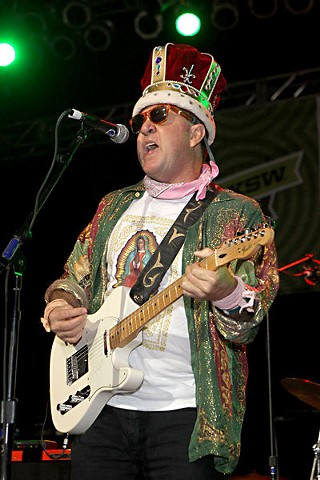 In 1976, author and then-Texas Monthly writer Joe Nick Patoski heckled an act onstage at Soap Creek Saloon and ended up managing Carrasco and El Molino, whose ranks would soon (and still) include his wife, photographer/keyboardist Kris Cummings. Here's what Patoski emailed us about his tenure with Carrasco. – Margaret Moser

The [El Molino] band that played Blondie's on East Sixth Street was Ike Ritter on guitar, Speedy Sparks on bass, David Mercer on Farfisa, and Richard Elizondo on drums. They opened a lot of shows, but because of Joe's pedigree with Salaman and Shorty y los Corvettes, they'd get these Eastside Chicano club gigs.

Joe finished recording the first album after a lengthy period following his father's death in a car accident up in Fort Worth. For a while, Rocky Morales' son Junior was going to do the cover. Somehow, Joe ended up asking Kris to do it and I suggested the cheesy stuff like the floating heads with stars, definitely inspired by King label James Brown covers, some early Ike & Tina covers, and the commercial storefront art of Joseph Henderson from East Austin.

Kris did the cover. I worked up a mailing list and Joe sent out this cool-looking, cool-sounding, Tex-Mex R&B sorta rock & roll album. Tex-Mex Rock-Roll riffed off of Dave Hickey's term "rock-roll" in his Village Voice writings. The New York and UK press dug the record. I think it was in Melody Maker that new sensation Elvis Costello played Rate A Record. He judged the new single "Roxanne," by a band called the Police a piece of crap. He gave Tex-Mex Rock-Roll an A+.

The press was good enough that I egged him on about taking his show on the road. But the San Antonio cats were very hard to round up, much less take on the road. I don't know what happened between Joe and Ike other than a lot of speed. David Mercer's wife didn't like him playing music in clubs, so touring was out for him.

Joe thought a stripped-down approach was better. I don't know if it was Costello or what, but he wanted to replace horns with an organ. Joe worked on Kris for awhile, found her an organ, and showed her the Tex-Mex basics. She knew Professor Longhair but knew less Augie Meyers.

The El Molino that started in the summer of 1979 was Joe, Kris, Speedy, and Richard or Bill Bentley. Richard tired easily, while Bentley was more into the Bizarros. Speedy didn't like the direction Joe was heading and wanted to play more rhythm and blues. He didn't show after a break one night at Hole in the Wall, which is where Brad Kizer stepped in. Mike Navarro tells the story of Joe looking for a Mexican drummer, which is how Joe found him.

On their first run to New York that November, the band was still El Molino according to the cheesy satin-sparkle banner they carried. By the next spring, they were the Crowns.

I was always whispering in Joe's ear and around the time of that first New York trip, I quit whispering and writing and became a band manager. Blew off an offer from Esquire, turned down book proposals on Willie.

I thought I knew what I was doing. – Joe Nick Patoski