By embracing the 19th and early 20th centuries, Beck reconceives what the album could be in the 21st.

Song Reader: Twenty New Songs by Beck isn't a CD, and there are no downloads. There's no audio at all. Instead, its tall folder holds two pockets filled with beautifully designed sheet music – 20 individual compositions to pop on the piano or music stand – plus a few essays on thick, folded paper. To hear this music, you or someone you know has to play it. Live. In person. 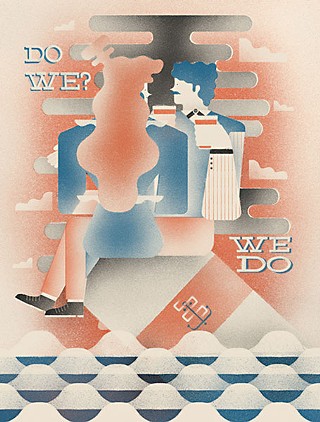 For the vast majority of human history, music has taken the form of an exclusively live experience, performed in the same space as the listener. Until radios slowly replaced them, pianos occupied most American homes. And until the middle of the last century, a hit single came in the form of sheet music. Beck notes in his preface that Bing Crosby's "Sweet Leilani" sold 54 million copies, roughly the same number as Michael Jackson's Thriller thus far. The difference remains that the former crooner had his Oscar-winning smash when the country's total population was 128 million! In his own small way, Beck Hansen tries to reconnect the listener and artist with Song Reader.

A music chart or lead sheet attempts to capture the core of a song, stripping away the nonessentials and leaving the definitive parts that make it unique. Usually, that's melody and harmony. For much of contemporary Western music, instrumental color and rhythm have played a much larger role than they did in the past. When he saw sheet music for an earlier album of his, Beck realized that it lost something vital in the translation. Sheet music didn't represent his songs in an effective way when stripped to their melodies and chords. On Song Reader, the author writes from a different perspective, attempting to create songs whose core could be captured in sheet music while leaving enough room for interpretation to bring the song to life. The results are overtly old-fashioned.

In chart form, Beck's songwriting strengths lie in his lyrics, and, herein, with musical instruction as well. Often at the top of the sheet music, there's a word or phrase meant to capture the feel of the piece and guide the player. For "Eyes That Say 'I Love You,'" that's playfully vague ("very characteristic"), while instrumental "The Last Polka" warns of the end of the genre ("premonitory"). On the "Last Night You Were a Dream," there's the warning, "Any Parodied Representation of This Composition Is Strictly Prohibited." Straightforward recommendations also exist: "swing," "slow shuffle," and even the traditional Italian "moderato."

Musically and graphically, the pieces harken back to the era of classic American song, but they generally lack the harmonic sophistication of the best of that age, which was the most harmonically complex of any movement in Western popular music. While playing through songbooks by the undisputed greats – Harold Arlen, Hoagy Carmichael, George Gershwin – there are constant twists and turns, modulations and musical leaps, all while never losing sight of what's catchy and accessible. On Song Reader, the music plays out simply and harmonically straightforward. There are exceptions, like "Old Shanghai," which begins with a tonic major chord only to directly shift to a tonic minor chord, a great turn that immediately recalls classics such as Kurt Weill's "September Song," which starts the same way. And this isn't to say that harmonically simple songs can't be substantive. There's too much incredible music that says otherwise. 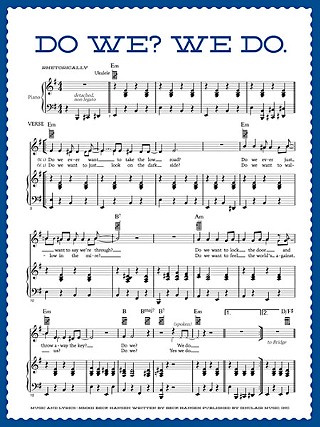 Where classic Beck bites smart, clever, ironic, here he surprises with the seemingly sincere "America, Here's My Boy," an homage to patriotic hits written during earlier wartimes. The music sets up a slow A-minor key as the lyrics tell of a mother bringing up her boy, only to give him over to the military. She never sees him again, and the song ends, "America, where's my boy?"

Possibly the most fun piece, "Mutilation Rag" invites waggish aggression and self-expression. After the wry opening instruction, "All is well; the song begins like any other," the next section proclaims, "Something's gone wrong," and tight dissonances gradually lead to a "headlong charge" of opposing chromatic runs in the right and left hands that finally arrive at a section of clusters where the player pounds the keys with his fists. At the end, "the Left Hand falls in defeat" by playing a descending B Locrian scale.

From faux-hymn "Saint Dude" to the playfully doleful "Now That Your Dollar Bills Have Sprouted Wings," the pieces in Song Reader unfold as fun songs, catchy songs, and, with the lyrics, they retain enough Beck-isms to make it work. As music, they're not definitive – more cute than classic – but the work offers myriad rewards, one of them being the artwork and design by Marcel Dzama. Like Chris Ware's Building Stories graphic novel, the packaging becomes something more than a container for the content. As much as the music, it is the content. While Beck obviously conceived this project, Dzama deserves more than the very minor billing he's given on the back cover. In this era of nonmusicians, the visual art of this piece acts as a wide-open door for people to experience the album.

One hundred years ago, Marcel Duchamp reconceived what an art book could be by filling The Green Box with replicas of his art, sketches, notebooks, etc. His radical vision blooms as relevant as ever with artists like Beck and Chris Ware following in his footsteps. Technology changes so much about the arts, but a creator with one eye to the past and another to the future can take old forms and find new meaning. Even for those who can't read music, between the graphics, words, and essays, nonmusicians could spend a lot of time exploring Song Reader. When they're finished, they can make their friends who do read music play it for them – live. In person. 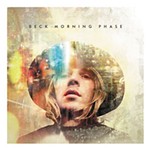