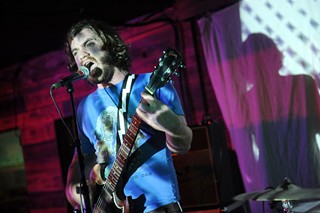 
Local promotion entity Psychedelic Light & Sound put its motto of "a festival designed to overload the senses" to the test with this sprawling, 12-hour lineup. The improvisational ambience of Lattice, Cream-y power trio traditionalism of Pi, and Wolfmother worship of Fort Worth's Sonic Buffalo barely registered, but things picked up with Surly Gates. The quartet stayed sober, but its well-crafted Crosby, Stills, Nash & Crazy Horse approach needed no psilocybin. Fueled by surf music and Americana, Modrag's snappy garage pop injected caffeine energy into a Nuggets core, the local trio's sharp songwriting trumping any lack of originality. Invading the paisley underground with Eighties synthesizer, ambitious songs, and some post-punk hip shake, Obscured by Echoes became the most distinctive and sophisticated band on the bill. Black Tabs' grunge stripped down to just riff, beat, and voice, fronted by a blues mama who makes up in enthusiasm what she lacks in technique. Furthest flung of the bill, Denver's Thee Dang Dangs bounced through straight garage rock, highlighted by Rebecca Williams' reverb-drenched yelp and catchy tuneage. "I wish I was on acid," proclaimed Blind Pets singer/guitarist Josh Logan, whose mother was in attendance. "I hope someone here is." An annoying amp hum nearly obliterated the first half of the local trio's hard-rocking punk (or is that punked-up hard rock?), but once it took off, the Pets played as if this was both the most fun experience of their lives and the last. Led by Psychedelic Light & Sound's Robbie D Love, Deep Space took advantage of host duty to soak in self-indulgent but sincere "free your mind" psychobabble, as well as spacey acid jams. The antithesis of Deep Space, San Antonio's Rich Hands celebrated the virtues of pre-weed rock with refreshingly simple lyrics, catchy tunes, and a good beat the kids could dance to.