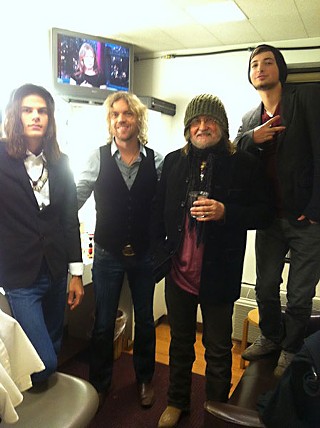 Allow me to lecture to you on the importance of voting.

I pride this city not only as being a hotbed of creativity and talent, but also as a congregation of people with great taste. It's time for you to show it off by telling us who the best musicmakers in town are via the 2012-13 Austin Music Poll. This entirely write-in ballot with 45 categories remains the most unfiltered and democratic method of ranking and recognizing local musicians.

Last year, Quiet Company and Wheeler Brothers combined for 15 awards – a demonstration, in part, of those bands' abilities to mobilize their fans to vote. By now, you've already had your friends hit you up on Facebook asking you to vote for them in one category or 10, and by all means, vote for them, but I urge you to be diverse in your selections. Top finishers in each category receive onstage honors at the Austin Music Awards at South by Southwest, Wednesday, March 13. Last year Bruce Springsteen closed the show.

So, fill out a ballot. I've included a copy of my own:

Band of the Year: The Golden Boys

Song of the Year: "Sally Was a Cop," Alejandro Escovedo/Chuck Prophet

Album of the Year: Dirty Fingernails, the Golden Boys

Rock: Not in the Face

None of the Above: Minor Mishap Marching Band

Screw You, We're From Texas

Ray Wylie Hubbard compared last week's appearance on the Late Show With David Letterman to being at Six Flags. "You wait and wait and wait, then, all of a sudden, you're on this old wooden roller coaster for three and a half minutes. Your heart's pumping! It's exciting, and then it's over, and you're like, 'Man, I want to do that again!'" At the host's request, Hubbard performed "Mother Blues" off last year's The Grifter's Hymnal. The talking blues, which was shortened to fit the program, describes how his superficial desires for a stripper girlfriend and a Les Paul Goldtop guitar led him to a fulfilling family life. The epic story song resolved into heartwarming gratitude, with Hubbard giving thanks to Letterman for having him on the show, and to his son Lucas for playing lead guitar on a handed-down Les Paul Goldtop. It was a hilarious, touching, and energetic performance that probably boosted "Mother Blues" stock as a fan favorite. In a rare move, Letterman asked the local and his band to stick around and play another request, "Screw You, We're From Texas," which they obliged. On playing the Late Show for the first time at age 66, Hubbard commented, "I didn't want to peak too early."

› SXSW revealed its third wave of performers for the 2013 music conference. Vampire Weekend, Eagles of Death Metal, Local Natives, Jovanotti, and Z-Ro are included in the list of almost 500 newly announced acts. The release included the largest pouring of local performers with 43, including Marmalakes, Silent Diane, and Scorpion Child, plus notable old-schoolers True Believers and the Wild Seeds. SXSW Music GM James Minor says there are quite a few acts yet to be announced, and more headliners will come in individual bulletins. Wristbands go on sale today, Thursday, 10am, online only at www.wristbands.sxsw.com.

• Eighteen-year-old fiddle phenom Ruby Jane didn't expect to see her violin again. When armed carjackers made off with her gear in Houston last winter, it was all over the news. "With all the coverage the carjacking got, I thought they would have burned it to destroy the evidence," she says. She was thus shocked when a friend saw the instrument for sale last week on Craigslist. Jane and her mother, JoBell Smith, called the police department, which set up a sting and recovered the violin. "It was surreal and amazing to hold it in my hands again and think about everything it's been through," glowed the young musician. "It was divine providence that it was brought back to me."

› Billy Milano, vocalist for crossover thrash heroes Stormtroopers of Death and Method of Destruction, resurrects the latter M.O.D. this weekend at Frontier Bar. In November, Milano signaled his return to the stage when he emerged during Municipal Waste's Fun Fun Fun Fest set and announced, "Hi everybody, I'm Billy Milano, and I fucked your mom in the Eighties – guaranteed," before singing "United Forces," a track off S.O.D.'s classic first album, Speak English or Die. Milano, a distinctive character in the crossover thrash genre for his clever, politically incorrect lyrics, lives in Austin. With the heavyweight band's last reunion a handful of years back, interest was high enough to book back-to-back performances. On Friday, M.O.D. will be joined by Belligerent 86, Blunt Force Trauma, and Philo Beteaux. On Saturday, they play with the Blood Royale, Sabbath Crow, and the Dirty Charley Band.

› The Austin Record Convention's spring show has been canceled because organizer Doug Hanners has simultaneous family obligations. Vinyl enthusiasts will have to wait until October for the next local summit.

› DJ Mel confirmed that he's headed to the nation's capital for Monday's presidential inauguration. The local spinner, who enlivened the Obama camp's election night party, is scheduled to provide the soundtrack at several official events. Tune in.