Digging up the roots of Free Week 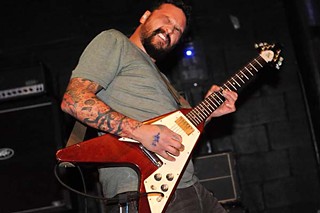 Jason Morales at Red 7 with Tia Carrera, whose first Free Week tweak was in 2003 (Photo by John Anderson)

As of press time, I've been at shows for 14 straight nights. My ears are ringing, I'm woefully underslept, and I've eaten way too many slices of Hoeks Death Metal Pizza. I've never felt better in my life.

The vital signs of the local music scene are good too. There's no better time to assess that than Free Week, where the cash box stays shut and bands sweat, strum, and scream in front of big crowds to make their mark on 2013.

For aficionados and rank amateurs alike, Free Week's all about discovery. If you do it right, you'll find yourself in an unfamiliar venue being blown away by a band that isn't even the one you came to see. Follow the crowds, follow the sounds, follow your friends, or just stumble around surveying the vast assembly of local talent until you find your new favorite band.

"It's like South by Southwest for local bands and local people," says Transmission Entertainment's Graham Williams.

Williams didn't intend to start a citywide tradition when he created Free Week in 2002. Then booking Emo's, he devised a string of free concerts to fill the club during a week that's typically hard to book due to the holidays and bad weather. Ancient copies of the Chronicle list locals including Lower Class Brats, Those Peabodys, and Super Heavy Goat Ass, though it wasn't promoted as "Free Week." SXSW's James Minor, another former Emo's booker, believes that the following year was when it became an annual event. That year's lineup featured Pink Swords, Britt Daniel, and the still Free Tweakin' Tia Carrera.

Over the next couple years, the event expanded to both of Emo's stages. When Williams left Emo's and started Transmission, Mohawk and Red 7 began booking Free Week shows, and other Downtown clubs followed suit. Participation with venues all across town has become so general that charging money for a show during the first week of January has actually become rare. Interestingly, Williams feels no sense of ownership over Free Week, which involves more than 300 bands in 25 venues this year.

"It's cool that all the clubs book their own Free Week, because it's made it bigger and a better experience for fans," Williams commented by phone. "Honestly, I'm shocked that other places like Houston and Dallas don't do it."

Even for a heavyweight booking agent like Williams, Free Week offers a massive showcase of undiscovered talent.

"I see a ton of locals for the first time during Free Week. We have a couple bands playing at Fun Fun Fun this year that I saw at last year's Free Week." 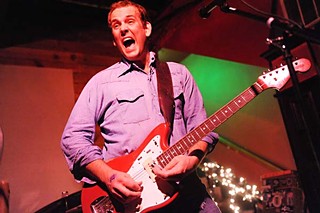 When I ran into Paul Waclawsky, singer/guitarist for the Boxing Lesson, at the space rock trio's crowded Sunday set at Mohawk, he was buzzing on a Free Week high.

"It's a very electric time in Austin, when people are extraordinarily open to finding new bands to support," he exclaimed. "The Boxing Lesson makes new, lasting fans at this time each year."

Waclawsky admits that bands are paid little – sometimes nothing – for Free Week performances, but the Boxing Lesson still plays four Free Week shows every year for the exposure and large crowds.

"It's good for selling merch and making new fans, so it all balances out in the end," he explains. "More importantly, it brings the scene together in a unique way, and it really sets the tone for the upcoming year of local music."

› After four years of shimmying at Shangri-La, the Second Sunday Sock Hop jumps to the White Horse. The popular dance party, where Breakaway Records owner Gabe Vaughn (aka Secondliner), White Ghost Shivers frontman Wes Borghesi (Shorty Stump), and veteran DJ Tim Murphy (Timurphy) hit gussied-up patrons with an electric shock of vintage vinyl, has become an Eastside institution. Launching at the Longbranch six years ago, the SSSH shook the Scoot Inn before finding a home at Shangri-La. Not surprisingly, neighboring residents prefer quiet to an exquisite selection of rock & roll, soul, R&B, doo-wop, and girl groups. "We've been jumping through hoops and bending over backward to keep everybody cool," says Vaughn, "but it got to a point where it was taking a hit on our numbers." Sunday, the show debuts at the Horse, and owner Denis O'Donnell views the partnership as logical. "Anything that gets a room full of people dancing and having a good time is what we do best," he says. "Sure, our bread and butter is country, but if you don't like soul music, you don't have two ears on your head." 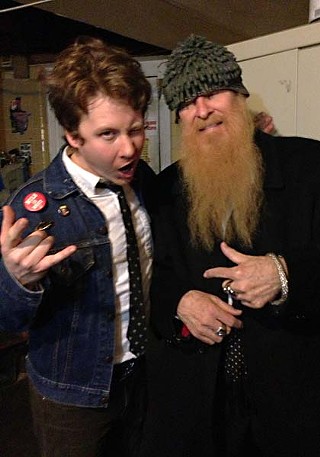 › Billy Gibbons made the most of his stay in Austin, ringing in the new year with Willie Nelson at the Moody and dropping in on Gregg Allman there two nights later. The next evening, the ZZ Top frontman appeared at Strange Brew Lounge Side during the first night of Van Wilks' weekly residency. Recalling his time crashing on Wilks' couch, he explained the genesis of their co-written track "Drive by Lover," which Wilks sang with Christopher Cross. Later that night, he checked out Ben Kweller's set at the Continental Club. Friday, Gibbons jammed on two songs with Mike Flanigin at the Continental Gallery. Gibbons' early band, Houston psychedelic blues rockers the Moving Sidewalks, reunites for a concert in Manhattan on March 30.

› The day after Hurricane Sandy hit, Norton Records owners Billy Miller and Miriam Linna peered into their waterlogged warehouse. "I felt like I was in a wet graveyard where all my friends were buried," sighs Linna. The New York label, famed guardians of wild, retro rock & roll, including Roky Erickson and Doug Sahm, are now faced with replacing everything. Austin's contribution to the effort goes down at Antone's on Wednesday, Jan. 16, with Eve & the Exiles joined by Homer Henderson and T. Tex Edwards; the Freddie Steady 5; the Texas Mavericks playing a set of Erickson and Sahm tunes; and young retro rockers the Best. "It's a real fortifying feeling to see these pockets of loyal people who are willing to come to the aid of a crazy little record label," offers Linna.

› Outraged at recent "Best of" selections by pretentious music critics? Want your voice heard? Tell us who the best musicians in Austin are in the 2012-13 Austin Chronicle Music Poll, found both in this week's issue on p.58, and online at austinchronicle.com/music-poll. Ballots are due Feb. 1.