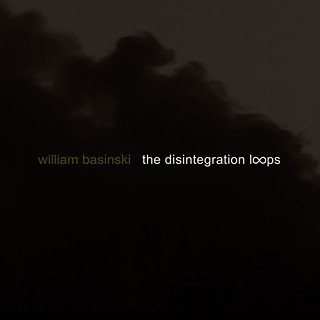 
In the early Eighties, New York composer William Basinski constructed a series of ambient loops, clips of sound broken off from an adult-contemporary station and balled into gelatinous, murky circles. Each of these loops lived on magnetic tape, part of Basinski's personal archives for decades – until 2001, that is, when he decided to encase this digital elusiveness on a hard drive. Basinski started playing one of these (now antique) loops into a digital recorder fastened to his computer, and something curious started to happen. With each rotation of the tape, microscopic pieces started to flake off. In fact, the music itself began to disintegrate as it played. Basinski repeated the process with his other loops and got the same result. By the end of digitization, the sound simply ceased to exist. That's what makes The Disintegration Loops special. It's a blatant aesthetic with an obvious metaphor. We're listening to disappearing compositions – sun-kissed music slowly dimming, diminishing, decomposing, slipping out of matter. It makes us think of death, life, and our reconciliation to our guaranteed disintegration. It's humorless stuff, but this box set comes built for people touched by it. The four volumes of loops, originally released early last decade, are pressed on vinyl for the first time and also included as CD copies with a hardcover book. And from the stout cardboard box and how good it looks on a bookshelf, this set feels like the final word. The first loop, "dlp 1.1," remains the most powerful: a soft, sad, and short reprise of brass, with a faint undercurrent of whistling, destructive noise. It's peaceful, devastating, and nearly an hour long. A few months after Basinski's accidental genius, the Twin Towers fell. He climbed to the top of his apartment building, and caught the final hour of daylight on his camcorder, the smoldering ruins blowing off into the heavens. He played this film back with the decay of "dlp 1.1," and the project's been a monument for the sorrow of that day ever since. A DVD of the film is included here and raises predictable questions. Is it ethical, overwrought, too blatant? Thankfully, as with every part of The Disintegration Loops, there are no easy answers.

No Catharsis in 'The Comedy'
Rick Alverson and Tim Heidecker talk about an A.O. Scott savaging and the danger in grand gestures

Communing in the Air
'Lounge!' transforms Arthouse into a space that swings