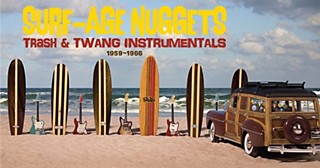 
Singers? Who needs singers? Not these forgotten bands, which collectively make the case for instrumental surf music's pivotal role as pump-primer for the Sixties garage rock explosion. Since onetime Rhino Records producer James Austin already delivered the grail with 1996's Cowabunga! The Surf Box, his mission on this 4-CD set is spotlighting unsung rarities. Other than a couple of tracks from Dick Dale ("Jungle Fever") and Bobby Fuller ("Stringer"), this cast of unknowns demonstrates the degree to which Southern California surf culture penetrated the hinterlands. Malibu siren Gidget, mass-produced electric guitars, and Top 40 AM radio stations segueing into the news with instrumentals factored into the genre that reached far beyond the beach. With no vocals to get in the way, these crude, reverb-soaked tunes double as deeply evocative incantations. Song titles like "Scrambler," "Tickler," and "Dragon Walk" might as well be the names of carnival rides. To a landlocked kid in 1962, the resulting visions of big waves and fast cars must have been irresistible. The clearest antecedent to this remains Link Wray, whose 1958 "Rumble" was banned for inciting juvenile delinquency without uttering a word. That's no doubt why the Valiants of Rockford, Ill., ripped off Wray by presenting "Jack the Ripper" as their own. Down the road in Anderson, Ind., the Countdowns conjured a lasciviously distorted party grind with "Do It." The Phantoms' "X-L3" follows alien invasion guitar reverb with a "Wipe Out" floor tom run, while the Scouts reenact the Battle of Little Bighorn at Doheny Beach with "Mr. Custer Stomp." The Ric-A-Shays incorporated musical hints of Merseybeat and painfully fake British banter from a young Harry Nilsson into 1965's "Turn On." Alongside vintage Sixties radio ads and unscathed by terminal nostalgia, these once-disposable sides now resonate as totems of a cultural crest.