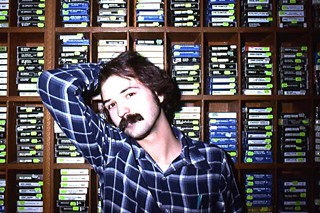 Richard Dorsett in front of a wall of 8-track tapes at Inner Sanctum, circa 1978 (Photo courtesy of Joe Bryson)

Late October 2012, Friday, 5pm: The line at Scottish Rite Theatre to see John Taylor winds down the front walk and spills onto the sidewalk on 18th Street to the corner. You know, John Taylor – Duran Duran, Power Station. The little-publicized event sold out quickly, and management has had to add folding chairs in the back of the handsome hall to accommodate ticketholders buzzing with excitement.

As doors open, people pour into the lobby, stopping first to pick up the book they've ordered. That's right, this is no concert. Scottish Rite sold out on the basis of a book. A book by a rock star, to be sure, but nonetheless, a book. And a readable one at that. Some carry multiple copies to be autographed after the onstage interview.

To parse the obvious, no one expects Keith Richards' revelations or anything too scandalous outside the traditional sex-and-drugs-and-supermodels lifestyle that the Rolling Stones more or less invented, and Duran Duran updated for the Eighties. Rather, In the Pleasure Groove is delivered in compact chapters that move through Taylor's fairly meteoric rise from Roxy Music fanboy to international superstar in fast-paced, candid prose. Add the bassist's willingness to do a promotional tour and be grilled publicly, and locals are connecting with John Taylor. Through a book.

Though the centuries-old craft of book publishing staggers into this millennium as beleaguered a medium as its newspaper cousin, enough Duranies take significance and meaning in the physical book to buy it, even if it's merely a ticket to a few seconds with an idol from their youth.

A popular line of thinking reminds us that the ability to record and preserve music remains relatively new, so its constant transformation should be no surprise. Books, too, although if selling used books were treated like the illegal downloading of music, publishing would be a whole different world. This Friday night, however, books are hot.

This Friday night is also the night Richard Dorsett died at his house of a heart attack.

Do Androids Dream of Electric Sheep?

In 1976, I'd seen Richard Dorsett just off the Drag at Inner Sanctum Records, behind the counter mingling with Joe Bryson and the other platter-pushing staffers. They were 99% male, often cute, but so snotty about music. Think High Fidelity with Texas accents and directed by Rick Linklater. They intimidated me, though I carried enough musical knowledge to spar with them about outlaw country and Sixties rock.

One night, Dorsett was at Antone's at Sixth and Brazos, slouched on one elbow and wearing a black sweatshirt with Asleep at the Wheel emblazoned in gold letters across it.

"Wanna dance?" I gathered up the courage to ask.

Dorsett looked at me as if I were at Inner Sanctum asking for Olivia Newton-John records.

Lesson over, but the next time I came into Inner Sanctum, he was pleasant enough to me. We didn't really become friendly until the punk club Raul's opened just up the street, and every record store clerk and young writer became a band manager. I managed the Chickadiesels and, later and briefly, the Huns. Dorsett worked the F-Systems. We were peers, friends, and participants in the scene. He even went down for the cause, arrested in the Huns bust at Raul's.

Equally important, we became book friends, working together in a bookstore Downtown around 1978, both with an insatiable appetite for reading. We took delight in the perks – three free paperbacks a week stripped of the covers – and memorized daunting titles so we could airily say, "Oh, you mean The Origin of Consciousness in the Breakdown of the Bicameral Mind by Julian Jaynes? That aisle."

The science-fiction genre was undergoing a renaissance with cyberpunk, and Dorsett was also involved in the printing of numerous local zines, including Ground Zero and Modern Stories. At the bookstore, we tended the wall of science-fiction books faithfully. It was a popular section. Roky Erickson was a regular, sitting on the floor with a stack of books around him.

"Do you have Blade Runner in paperback?" a customer quietly inquired one day.

"Yes, but look for it as Do Androids Dream of Electric Sheep," I directed him. "It's by Philip K. Dick and back on the sci-fi wall."

Dorsett fixed me with a tight-lipped stare as the customer headed to the back.

Dorsett eventually opened his own used bookstore in the mid-Nineties, Olympia Books on the Drag. It had places and spaces for people to sit and read, and to walk in there often was to see its owner doing just that. And looking supremely happy.

Love Will Tear Us Apart

Our early tenure at the bookstore was crucial musically, because punk and New Wave were in full swing and completely ignored by FM radio, except on KUT, where the Rev. Neil X played it on a weekly late-night show. KLBJ was the rock station of the day, its studios then located Downtown. One of its on-air personalities, Tom Quarles, stopped in regularly, so Dorsett and I began a personal campaign to get punk and New Wave on the station.

"Elvis Costello? Patti Smith? What about Blondie? They're easy," persisted Dorsett, leaning across the counter. Quarles smiled and paid for his newspaper.

Quarles nodded good-naturedly, folded the newspaper, and headed for the exit.

Try to imagine what radio was like if this music was considered too radical. Time has been very kind to this era, but a real schism existed between mainstream radio and fans of the new music, who considered the Eagles, for example, pompous, overproduced SoCal pop.

"The Ramones? XTC?" Dorsett called out after Quarles, who gave me a world-weary eye roll and waved goodbye as the door closed.

One Saturday, business was slow and the store radio was tuned to KLBJ, as usual. At 1pm, the room seemed to go silent until a faint, spaceshiplike beeping grew louder and the twangy guitar and bongos of the B-52s' "Planet Claire" filled the room.

As Tears Go By

Dorsett would have pooh-poohed John Taylor's pleasantly dishy autobiography as lightweight, but I bet he would have enjoyed This Will End in Tears by Adam Brent Houghtaling. At least he would have found many topics to argue. He loved to argue in a most nonthreatening way, and this book is rife with conversation. It's also one of the most engrossing reads of 2012.

The Miserabilist Guide to Music, reads the subtitle, which makes it sound like a treatise on songs to slit your wrists by. It's not. It's wonderfully written and engaging on the broad subject of sad songs. The topics are fascinating: Swiss studies on the color blue, essays on couples like George Jones and Tammy Wynette, commentary that links Biggie Smalls and Gustav Mahler, and the notion that we're born listening to our mother's heartbeat.

Houghtaling wrote this book for people who read, its 400-plus pages dense with subreferences and scholarly almost to the point of academia. Yet the author's love of his subject and his division of the book into short chapters on individual songs, performers, and genres, with equally brief lists, makes This Will End in Tears easily digestible. That's a good thing in a world where print is suffocating before our eyes.

This Will End in Tears also landed in my life amidst the deaths of three friends, so the timing counts as bittersweet. Still, it was a reassuring read, proof that if nothing else, there's a song for every occasion, especially sad ones. A book, too.

I think Richard Dorsett would agree. And if he didn't, he'd have a good point to argue about.