Dope Moons Volume One, North African Berserk, Nightmare on Silly Street, and Half the Night is Candlelight (Monofonus Press) 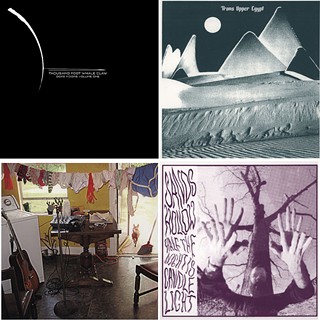 
The black-hole noise opening Dope Moons seems infinite, humming for minutes before a loop rezones the spacious ambience into a three-note bassline and a single repeated tone that rides out the astonishingly uneventful 20-minute time warp of side A. The flipside comes alive, by comparison, dwelling on the local quartet's kick drum and layers of analog chirps until a long, accelerated "woooooosh" ends it. This is an album without songs where nothing really happens, but somehow it doesn't suck.


This Italian quartet's dub basslines and wailing vox at times recall Public Image Ltd., only more exciting. Psychedelic weirdness, punk rock, and hypnotic repetition, Trans Upper Egypt drops nitroglycerin into the dance party punch bowl on its second release, a five-song EP. Atop an ace rhythm section that locks into unholy grooves lies radioactive guitar distortion and wildman vocals delivered in non-native English, which seem secondary until closer "TLW Are Deaf" hits like a deranged version of the Kinks' "You Really Got Me."

Half the Night Is Candlelight (Monofonus Press)


In between the short, lively instrumentals scattering this LP are stylistically diverse pop songs that take ice-cream-chord oldies, New Wave, and alt-folk foundations and psych them out with raw guitar leads and messy keyboards. That results in a concise, fast-moving album, with standout tracks "Watch Out" and "Education" demonstrating local collaborators Winston Chapman and Zachary Biggs' respect for melody, simplicity, and their best asset: good taste. 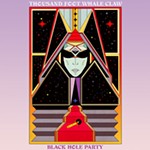