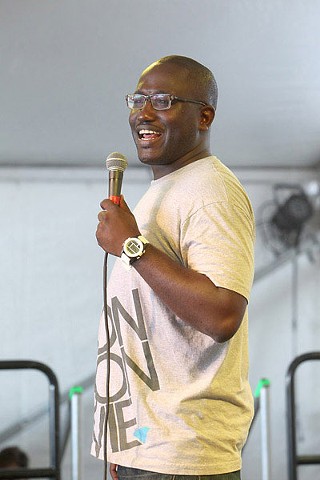 
There's worse goals for a comedian than being Jerry Seinfeld, and Hannibal Buress walked out onto a beyond-capacity Yellow stage wearing a virtual Next Big Comic medal around his neck. He adds a hipster burnish to "have you ever noticed?" humor, and it's now official: airport security line jokes are the new airline food cracks. And yet, he couldn't turn bits into a set. He flipped from urbane to urban (and not "urban," like he said, the white folks' term for black) without rhyme or reason. Maybe he's justifiably afraid of being, as he called himself, the guy from 30 Rock, but his sharpest, wittiest moments riffed on writing for the metacomedy. Where Tracy Morgan performs on a tightrope, however, Buress rules the peanut gallery. What difference is there between playing a YouTube clip of a Burger King fight, à la Tosh.0, and Buress describing it? What's so edgy about mocking old UGK lyrics? He may aspire to the Seinfeld throne, but at his present rate, he'll be the next Suli McCullough. Is being Jay Leno's wingman so bad? Depends on whether you're really the Next Big Comic or not.