In less stellar communities, Halloween remains a holiday for children. Here, our nightlife possesses Oct. 31, which means gigs galore by bands dressing crazy and pulling out all the stops. Here are three events helping define the scope of All Hallows' Eve in Austin:

White Ghost Shivers celebrate the impending doomsday with Apocaliptico Día de los Muertos Halloween Ball at the Beauty Ballroom on Saturday. The ninth annual bash features an end-of-days market square, face-painting and, I would assume, lots of confetti. Sharing the stage will be Clyde and Clem's Whiskey Business and Minor Mishap Marching Band. "The cool thing about this lineup is all three bands have a party atmosphere that people dance to," says skyscraping WGS banjoist Westen Borgeshi. "It will be a high-energy, good-spirited night."

On Halloween, the Moody Theater transforms into Soundsystem, an electronic music party featuring a three-story-high, 60-foot-wide, multisensory set designed by the team that produced Daft Punk's pyramid and the Deadmau5 cube. "It's unlike anything that's ever come to a stage in Austin or anywhere in the state," boasts organizer Jon Pleeter.

Performers at the all-ages event include Dirty Vegas, Classixx, RAC, Flight Facilities, and locals Learning Secrets, who will all be plugged into an augmented speaker system.

"Cocaine Sludge" sounds like something you blow into a tissue the morning after an all-nighter, but for local trio American Sharks, it's a sonic depiction: dense and dirty stoner metal, throttled into a roaring, raging, uptempo rush. "We come up with the sickest, heaviest, gnarliest riffs we can and then play it fast," explains burly bassist/singer Mike Hardin, whose bellowing recalls a down-pitched version of the MC5's Rob Tyner singing Roky Erickson's lyrics.

Before this year, the members split time between Houston and Austin, with the frustrations typical to long-distance relationships. Once Hardin moved to town, everything coalesced, according to guitarist Will Ellis: They released an excellent 7-inch on drummer Nick Cornetti's Pau Wau label, knocked out a West Coast tour, and played packed local shows. While Austin's proved the land of opportunity for these Sharks, Houston continues as its muse, Hardin's lyrics portraying the drugs, apathy, and delinquency that surrounded them back home like "demons," testing them, stalking them.

Demons aside, the horizon's bright for the American Sharks. In December, they hit the road with the Sword, whose bassist Bryan Richie produced their upcoming LP, and on Nov. 1 they join Dwarves, Died in Custody, and Krum Bums for Fun Fun Fun Nites at Red 7.

"We're playing the best we've ever had now because we're focused," says Hardin. "But we're not taking ourselves too seriously because, in the end, it's still rock & roll songs about Satan and drugs."

A Pen Is Mighty With the Sword

With an expansive vocabulary and knack for narration, J.D. Cronise continues to pen some of metal's most original lyrics. On the new Apocryphon, the Sword singer breaks from long-form storytelling in favor of metaphors and mythology.

Playback: The word "apocrypha" refers to canonical and non-canonical books of the Bible. That subject interests you?

J.D. Cronise: Yes, but in the broader sense of secret teachings, not necessarily referring to the omitted books of the Bible. It's about [the] idea of hidden knowledge and encouraging people to look beneath the surface and find the true meaning of things, rather than what the powers that be want you to know.

PB: From the woman on the album cover to tracks like "The Veil of Isis" and "Eyes of the Stormwitch," I sense acknowledgment of a powerful female force.

JDC: I have reverence for female history, so that's always going to be lyrical subject for me. In a lot of heavy metal, the masculine aspect is celebrated to a cartoonish degree and it's my answer to that. What matters at the end of the day? Being tough and talking about fighting, or coming together with the other half of the equation?

PB: Who are the heavy metal and rock lyricists you admire?

JDC: There's not that many, to be perfectly honest, but going back to older music, it's Phil Lynott from Thin Lizzy, a poet definitely. Donald Fagen from Steely Dan has some insane lyrics. Also a big influence on me was Sleep's Holy Mountain. The lyrics on that are amazing.

› Rumored to be closing for years, La Zona Rosa lists no shows on its concert calendar after Oct. 29. World Class Capital Group CEO Nate Paul, who bought the venue last year, says it's shutting down after that for renovations that include sound-system upgrades and "cleaning up the interior and exterior." It re-opens Nov. 16. According to Paul, C3 Presents will no longer be handling booking exclusively, but will still work with the venue in some capacity. Responding to rumors that he plans to turn the building into a hotel, Paul said that's an option for the future, but for now it will remain a concert venue. "We look forward to booking exciting things and getting La Zona Rosa back to where it was in its prime."

› A month after releasing its masterpiece third album Yellow & Green, Georgian metal quartet Baroness was mangled in a horrific bus crash while touring the UK in August, thus canceling a scheduled appearance next weekend on Fun Fun Fun Fest's Black stage. Singer/guitarist John Baizley's chilling account of plummeting down a steep grade in a brakeless bus comes as recommended reading only for the bravest: www.baronessmusic.com. Also the Black Lips, despite playing at least three shows in town during ACL, have been added to Friday's FFF lineup as part of a "special performance" that's shrouded in secrecy.

› Forget Record Store Day; the Austin Record Convention has been going on twice a year since 1981 (see "Fall on Me," Sept. 14). This weekend, join those guarded and encyclopedic vinyl hoarders in digging through the bins of history. Whether you're on an obsessive search for rarities or casually adding new music to your library, the North Austin Event Center at 10601 N. Lamar is the place to be Friday through Sunday. "Who should attend?" I asked founder Doug Hanners. He said, "Someone that wants more of a sensory return from music and technology than what CDs offer, but that vinyl and records still do." 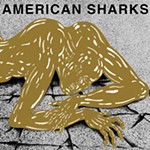 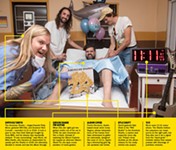 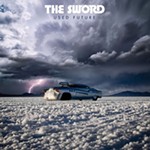 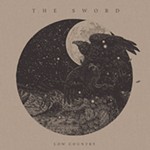