The ACL zeitgeist in review

The blow-up doll we found lying in the grass on Friday afternoon had one eye frozen in an amorous wink. Tape residue on her feet indicated she'd fallen off one of the flagpoles by which Austin City Limits Music Festival attendees locate one another in the masses. "Bernice" proved good company, breaking the ice with happy strangers investigating her three shallow holes before she sailed onstage to be humped by the Black Lips' Cole Alexander as he played a guitar solo.

Soon after, actress Rooney Mara stood behind the Atlanta quartet playing useless guitar, with Ryan Gosling and legendary local film director Terrence Malick in close proximity probably capturing footage that will never make it onscreen. If it does, Bernice will be in it, lying there with her arms outstretched and looking for love. Sadly, it was her last role. A security guard tore her apart.

Sometimes I feel like a rat that's chewed through a wall and found itself in a mansion. I certainly had that feeling watching the Black Keys' headlining set from the stage Friday night. How I got there I don't understand. In front of us, tens of thousands: arms aloft, ecstatic smiles, pulsing to the music. Behind us: Lady Bird Lake, the Austin skyline, our worries. The Black Keys aren't the deepest band, but they understand how to harness the elemental forces of five distorted notes and a heavy kick drum in a way that makes everybody feel good. That's why they headline ACL. People aren't looking to be informed. They're looking to be uplifted.

When they were done, and with no taxis available, we threw a stranger $20 to let us jump in the bed of his pickup and ride to the Beauty Ballroom where Houston rap boss Slim Thug threw down with surprise guest Paul Wall at an ACL afterparty. Call it a palate cleanser, not only because the audience was 80% black, but because they recited every lyric in perfect unison for a congregational effect all too rare to most festivals, though those witnessing the Roots opening their spectacular and soaked Saturday ACL set with the Beastie Boys' "Paul Revere" know all about uni-chants.

That same night, the great debate was Neil Young & Crazy Horse versus Jack White, top-shelf rockers scheduled simultaneously. I polled soggy concertgoers and concluded that, generally, if you were under 30, you were in White's corner. Anyone older and Crazy Horse was your nag. I dutifully split the two.

Jack White peaked. I'd seen him with the White Stripes and the Raconteurs, but Saturday, with his all-girl Peacocks behind him, he played the dirtiest music I've ever heard come out of him. White called audibles to the band as they regurgitated his garage rock catalog into a soul/country/R&B amalgamation with in-the-moment freshness. An epic reworking of "Steady, As She Goes" was transformative, rallying through several tempos, styles, and emotions. I don't even like that song and it hit me in the chest like a wrecking ball.

Astonishing as it was, the time came for me to turn around and run to the other side of the park. I looked like a maniac, jumping over blankets, dashing in front of the Porta Potties, and sprinting through an onslaught of sandal-wearing drunk dudes, but the loudening of Neil Young's eternal voice and the big crunch of Crazy Horse's amps carried me on.

"This song's for my sweetheart," declared Young, strumming the unmistakable four chords to "Cinnamon Girl" and adding, "She's out there somewhere."

Stooges guitarist and native Texan James Williamson made it to the Austin Kiddie Limits stage Sunday for Austin's School of Rock. (Photo by Shelley Hiam)

That old, black Les Paul possesses Young, turning him brutal and moonstruck. That's how you want him on a Saturday night: beating the strings on "F*!#kin' Up" and the immortal "Hey Hey, My My (Into the Black)," in which he assured us "rock & roll will never die" and proved it with a lengthy noise solo.

On Sunday morning I ran into Lumineers singer Wesley Schultz, who, on account of the Denver quintet's hit single "Ho Hey," has gone from playing to 50 people to thousands in barely over year.

Playback: Is there a different emotional force you have to put out to connect with this large an audience?

Schultz: It feels like with small audiences you work with these sharp instruments and with large audiences you're using blunt objects to move a crowd. For us, it's figuring out a way to express ourselves in a way that not only the person in the front row can appreciate it, but the guy 200 people back can connect to [it].

Sadly, the guy 500 people back couldn't hear or see shit when they played that afternoon since the Lumineers drew a main-stage-sized crowd to the small Austin Ventures stage and caused a human traffic jam.

Native to Michigan, I've always wanted to meet Iggy Pop, to shake his snaky leather hands and thank him for decades of sacrificing his body and ego for punk rock. Sunday felt like my day. I spent the morning sneaking around backstage areas looking for his trailer. I met his manager and told him the story of how a young Andy Kaufman hitchhiked to Vegas, hid in a janitor's closet all day, and jumped out at his idol, Elvis Presley, whose mere touch gave Kaufman the benediction to be famous. The same should have been true with me and Iggy Pop.

"Listen, a lot of people want to meet Iggy," explained the overseer. "There's no chance."

I wouldn't give up. When the Stooges opened with "Raw Power" that evening, I crowd-surfed toward the stage, which worked for about 20 seconds until I fell on some inattentive Red Hot Chili Peppers fans camping on a blanket near the front. The band was dynamite and Iggy was the burning fuse, and it all exploded when Pop invited fans to rush the barrier and get onstage. This was my chance! I recklessly climbed over concertgoers and launched over the rail, but was wrestled down by two goliath security guards who relegated me to the outskirts to watch a personally poignant version of "No Fun."

During a chance encounter, I asked Austin Police Chief Art Acevedo what he was excited for on Sunday. "The Red Hot Chili Peppers," he replied. He wasn't alone. There were droves of people all ages camping out in front of the Bud Light stage all day for a good view of the California funk-rock veterans. Personally, I think the Chili Peppers went limp in the mid-Nineties and are even worse off now that John Frusciante quit again, but it's a bummer to swim against the stream, so I became a RHCP fan. My cohorts and I took our shirts off, put our hats on backwards and, using black and red markers, drew RHCP tattoos on each other that featured the iconic red asterisk and featured phrases like "Butt-Sugar, Sex, Magik." 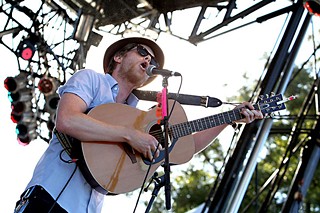 The Lumineers (Photo by Gary Miller)

Our bro-transformation inspired those around us to join in, earning them "Mother's Milk" nipple tattoos, barbed-wire armbands, and depictions of Anthony Kiedis' rodentlike mustache. With our new friends, who I think were genuine RHCP fans, we sang arm-in-arm to songs I didn't even realize I knew the words to and high-fived in between. For a moment I forgot I was being sarcastic.

Why immerse yourself in a fan base you resent? Because togetherness is the spirit of ACL. Whether you're hugging out an MDMA roll with strangers during Bassnectar, relaxing in an impassable fort of camping chairs with your friends, hoisting a toddler on your shoulders for his first concert, or making new friends by drawing fake tattoos on total strangers and fondling inflatable women, you've found the zeitgeist of ACL.

Andrew Bird: "If I Needed You" (Townes Van Zandt)

Rufus Wainwright: "The Man That Got Away" (Judy Garland)