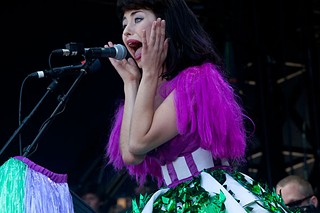 Kiwi songbird Kimbra, all bright feathers and big voice, woke up Sunday brunch audiences with her bright pop-jazz-soul hybrid and an ostentatiously large sequined skirt and ribboned cape reminiscent of a watered-down George Clinton get-up. The bulk of Kimbra's set was comprised of tracks from her debut full-length, Vows, including the don't-go-there-girlfriend sass of "Posse," soulful "Good Intent," and jazzy "Plain Gold Ring." These are all pleasant songs, but by the time she reached the midpoint with "Two Way Street," things started to get same-y. In fact, there was at least one person dozing, and dozens upon dozens of folks clearly more engrossed in their Twitter feed than in the music. That said, Kimbra's a very expressive and energetic performer with no small sense of showmanship; during danceable "Warrior," co-written with Mark Foster (Foster the People), she peeled off her enormous outer skirt to reveal a smaller frock approximating a bouncy purple ostrich. Despite the buoyancy of her songwriting, Kimbra's set list wasn't as diverse as her costumes.