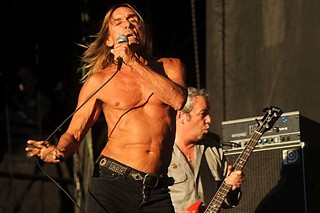 Setting a template for punk so tough and visceral that it took the world a decade to catch up, the Stooges authored three records of white-knuckle aggression before calling it quits in 1974. Twenty-six years later, the band reunited and recorded new music, and although the death of founding guitarist Ron Asheton put the band's future into question, it's returned again under the tweaked moniker of Iggy & the Stooges, with V.2 guitarist James Williamson of Raw Power fame, and Minuteman Mike Watt on bass. Live, Pop commands a stage like he did in his band's first coming. The backing Stooges felt sluggish by comparison, and the tempo of second song "Search and Destroy" in particular sagged in spite of Pop's aerobics. With a "fuck it," Pop flipped a switch – inviting fans to bum rush the stage for "Shake Appeal," throwing himself into the audience on "I Got a Right," and carrying a struggling "I Wanna Be Your Dog." After a snarling "No Fun" as an encore, Iggy & the Stooges stomped off, and the last thing we saw on the jumbotron was Pop's thin, outstretched middle finger. Cue the applause. 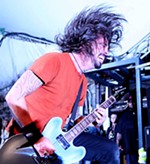